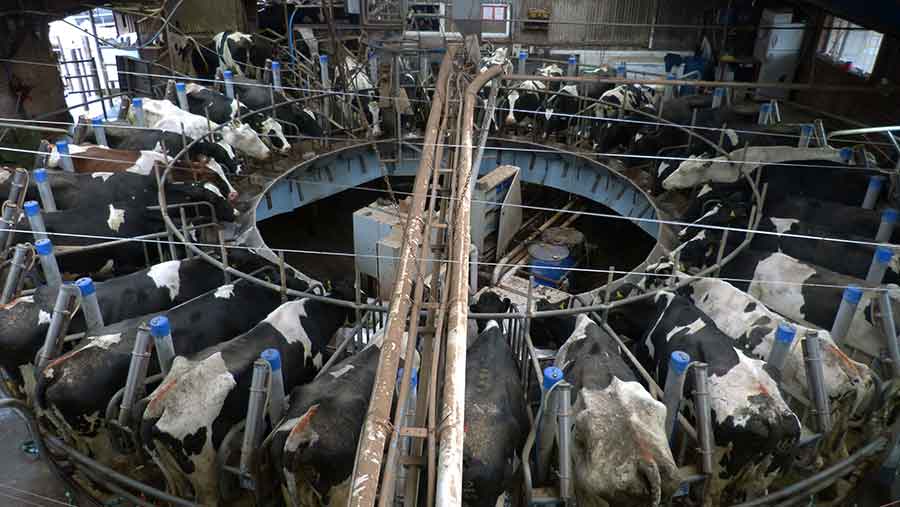 Two years of selecting genomic bulls on a five-star transition index has shown each star rating on the Genus ABS Transition Right index is saving 4.8 days open for a Cheshire dairy unit.

This means a five-star bull (five star equals best, one star equals worst) will have daughters in-calf almost 20 days sooner than a one-star bull at Cotton Abbotts, Chester, with the herd using a 4.4-star sire across heifers on average.

“That’s worth a whole cycle,” explains herd manager Warren Thomasson, who is pleased by the results shown by the Transition Right bulls used on the 600-head Cotton Abbotts Holstein herd he manages for Andrew Walley.

Furthermore, herd records show 3% of daughters bred from four and five five-star stock have metritis, compared with 11% from one-star daughters.

However, Mr Thomasson explains successfully transitioning cows comes down to a combination of good management, teamwork and breeding.

“I am pleasantly surprised at how good the Transition Right figures are,” says Mr Thomasson. “Getting your cows transitioning well isn’t 100% down to genetics, but I think it has an impact. We’ve made several management changes that should have helped the herd transition during the time the Transition Right index has existed. I see transition right as another tool to select the bulls we want.”

The top 50% of cows are bred to Holstein bulls with the bottom half served with British Blue semen. Bull selection prioritises health traits such as fertility, feet and legs and longevity.

Five of the six bulls used on cows have been five star, with one being a four star. Sexed-semen straws used on heifers come from nine bulls, of which one is a three star and three are four star.

Conception rate is at 39% and calving interval has fallen from 418 days to 394 (saving 24 days) in the past 12 months, but Mr Thomasson attributes the improvements to genetics and management.

Working closely with vets Rob George and Michael Wilkinson of Nantwich Farm and Lloyd Williams from Genus’ Reproductive Management Systems, Mr Thomasson has noted success in the double-estrumate approach and working closely as a team.

Cows are first served after a 42-day voluntary waiting period, with any “none seen bullers” put on an ovsynch protocol at about day 70.

Day one sees gonadotrophin-releasing hormone (GnRH) given and on day seven the cow is scanned and prostaglandin is administered, with a second prostaglandin issued on day eight. On day 10 another GnRH is given during the morning milking and AI’d late in the afternoon.

The double-estrumate approach has been done for more than 12 months and conception rates to synch are 6% higher, explains Mr Thomasson.

All cows are dried off at 220 days, regardless of yield, explains Mr Thomasson. “As part of the [Tesco Sustainable Dairy Group] antibiotics reduction is very important which is one of the reasons why we only using antibiotics on about 10-15% of cows at drying off. With 83.7% of the herd below 100,000 cell count on last milk recording, it shows selective dry cow therapy is working.”

For a cow to receive selective dry cow therapy (teat sealant, no antibiotics) the last three cell counts have to be under 120,000, her teat ends cannot be damaged and have no history of chronic mastitis.

When cows are dried off they spend five weeks at Meadow Lea – a part-owned farm nearby – where they are housed in a cubicle shed with sawdust alongside the youngstock.

“One person dries off cows, which is normally me,” explains Mr Thomasson. “I do this with a copious amount of surgical spirits, cotton wool, clean gloves with cleanliness absolutely paramount.”

Cows then return home, are foot-bathed and loose-housed on straw. Foot-bathing continues in a stronger (5%) formalin solution but once or twice a week.

The dry cow diets are dietary cation-anion balance and include chopped straw.

A close-up diet is fed around three-to-four weeks pre-calving, which has mycotoxin binders, calcium and magnesium chloride and limestone added in.

All cows are offered a 15-20 litre revival drink post-calving. Cows are then monitored in the fresh cow group with controlled stocking rates (95% or below) and less competition for feed and space for about two to six weeks.