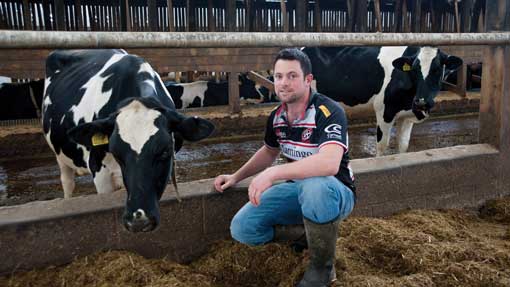 In the fourth part of Farmers Weekly’s Breakthrough BVD campaign we learn how one dairy farmer has eradicted BVD from his herd.

Taking a tough approach to bovine viral diarrhoea (BVD) eradication has paid off for one West Sussex dairy farmer, who has reduced his herd’s calving interval by nearly three weeks and increased milk yields.

Dairy farmer Phil Nash had vaccinated his herd for BVD for 10-years, so he was surprised when milk sampling confirmed disease in the herd.

The polymerase chain reaction (PCR) sampling had been undertaken at Brighthams Farm, near Horsham, as part of an investigation by his vet into a severe outbreak of calf pneumonia. A high number of first lactation heifers in the 280-cow herd were also performing poorly.

Over the winter of 2007-08, 70% of calves were treated for pneumonia. “This pushed us to investigate deeper. We had bloods taken from the calves and sampled the milk and both sets of samples picked up active BVD,” Mr Nash explains.

At that time, Richard Booth, a PhD student vet at the farm’s practice, Westpoint Vet Group, was researching BVD and Mr Nash volunteered to have blood samples taken from his entire milking herd and youngstock.

Those tests detected five persistently infected (PI) animals, including three cows, which were all immediately culled. As part of Mr Booth’s two year PhD project, selected groups of youngstock were periodically tested and no other BVD virus or PI animals were found.

BVD was finally eradicated in 2011 and since then, Mr Nash has reduced his calving interval from 420 days to 400 days, while the average milk yield increased from 9,200 litres a cow milk sold to 9,750 litres. Improved calf health has enabled herd expansion and allowed heifer sales to be increased, with first lactation animals now staying in the milking herd too.

“Our calving interval isn’t perfect by any means but it is certainly better and has been brought about by better fertility and conception rates and by monitoring fresh cow health more closely,” Mr Nash says. “With better forage quality after two bad years, we hope to improve our milk yields to over 10,000 litres this year.”

The all-the-year-round calving herd is closed – no animals have been purchased for 10 years. But despite the herd’s current BVD status, vaccination remains a priority. “We have five neighbouring livestock farms and to not vaccinate would be high risk,” adds Mr Nash.

Youngstock are vaccinated when they are more than six months old. It costs about £4.60 for the two doses given three weeks apart and half that for the annual booster needed thereafter.

Mr Nash says he was fortunate his farm was selected for the BVD study, but believes it would have been money well spent if he had funded the programme. “My message to other dairy farmers is that it isn’t an insubstantial cost and it means a couple of years of hard work, but it protects the herd for generations to come.”

Despite the risk, many dairy farms don’t vaccinate for BVD. According to vet Rob Drysdale, projects director at the Westpoint Vet Group, these farmers are “playing a game of roulette with herd health.

“A lot of herds are BVD free, but if farmers stop vaccinating they are creating a big risk,” he says. “My advice is that until this country is BVD free, farms must vaccinate.”

And, he warns farmers to “beware the Trojan horse” of purchased in-calf animals that may be carrying PI calves. “In-calf heifers pose one of the biggest risks for BVD introduction. Animals should be quarantined and blood sampled for four weeks before they come into contact with other animals to make certain they haven’t picked up BVD,” says Mr Drysdale.