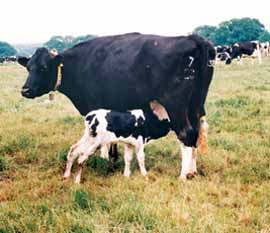 Scanning through my March daybook showed that I’ve been casting a lot of calf’s legs. I’ve identified some keys to good fracture management that include:

Coccidiosis in beef calves is often seen from about five weeks of age in animals that are outside with their dams. It seems the general impression among farmers is that the disease is on the increase. This could be due to larger herds or other factors in the environment such as a warmer and wetter climate allowing the parasite to thrive. In some animals there may be little obvious signs of scour and yet production losses will still be occurring. Pre-empting the time of infection and using an appropriate treatment on the whole group in the early stages seems to be the most suitable approach rather than reactive treatment.

Infectious diseases such as campylobacter or vibrionic abortion are often forgotten when is comes to poor bovine fertility and production.

Campylobacter is a true venereal disease of cattle, being spread from cow to bull to cow during serving. Hire bulls are a common route of infection. Risk can be reduced by incorporating sheath washing with an antibiotic into quarantine protocols, and can be eliminated by ensuring all replacement breeding stock, both bulls and heifers, are virgins. A true virgin is an animal which has never served or been served. It is not a bull which has never been used, but which “has been put with a couple of cows to make sure he can do the job”.

We have a super dairy in our practice, where 900 cows are kept in state-of-the art housing.

Recently, vet time has been spent discussing fresh cow health by using a combination of high and low tech approaches. The parlour computer indicates milk yield every milking so any drop in performance is flagged. The low tech approach is to spray mark cows at calving to allow them to be easily checked. This strikes me as an easier system than the US approach of checking temperatures and discharges – we need these cows to spend as much time lying down and feeding as possible.