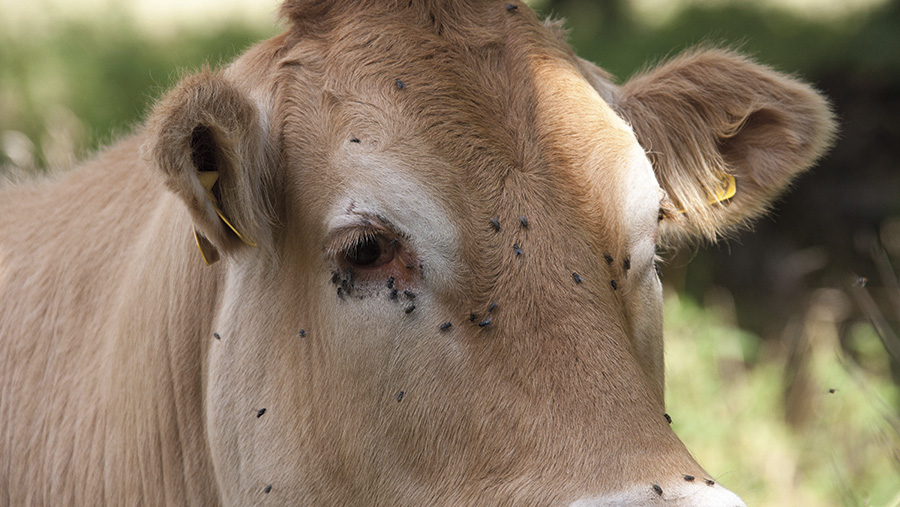 Lungworm and blowfly strike are among the livestock health issues highlighted in this month’s round-up, Vet Viewpoint.

Hailing from four corners of England, this month’s XL Vets Group representatives also address the looming threat posed by bluetongue and press the importance of fit, fertile rams to a tight lambing pattern.

The warm and muggy weather we are experiencing is causing a few issues with flies this summer.

Not only have there been numerous reports of blowfly strike in ewes and lambs, but cases of summer mastitis in autumn-calving suckler cows also seems to be causing a few issues.

The bacteria which causes summer mastitis are transmitted by the flies moving teat-to-teat, so it is important affected animals are isolated and treated with antibiotics and a non-steroidal anti-inflammatory.

In terms of prevention, application of a deltamethrin pour-on product will help to some degree, but also avoid high-risk animals, such as dry cows and heifers, grazing pastures prone to flies.

For example, those next to water sources and trees.

According to Defra’s website, there is “a high risk of bluetongue type 8 spreading into the UK” this summer.

This is due to the re-emergence of this virus in northern Europe and the consequent risk of infected midges arriving here.

The 2007 outbreak caused significant disruption, with movement and trade restrictions.

Here on the east coast we are perhaps on the front line of this threat.

Although sheep are most severely affected, cattle are the main reservoir for the virus. Disease in sheep is associated with high mortality and morbidity.

Clinical signs are similar to foot-and-mouth disease and bluetongue is a notifiable disease in the UK.

The mainstay of control of this disease is vaccination.

Both Zoetis and MSD have confirmed that vaccine was due to be available from mid-July.

Fit fertile rams are essential to achieve a high scanning percentage, and a tight lambing pattern.

This means there will be less than 2% barren after six weeks.

There are very few completely sterile rams. However, up to 30% of rams may be sub-fertile, meaning they get fewer ewes in lamb and take longer to do so.

If the infertile rams happen to be the more dominant of individuals, this can lead to even more significant losses.

Please speak to your vet regarding a full ram MoT and semen assessment, especially in flocks with high ewe to ram ratios and single sire groups.

Just like the unpredictable weather in the South West, disease caused by lungworm can also catch us unaware.

This month, one of our farms has been hit hard with classic signs of the parasite – young animals in their first grazing season with symptoms of coughing and breathlessness.

One positive aspect of the disease is the good immunity that cattle usually develop after one or two grazing seasons.

Wormers are used in treating the condition but can also be used preventatively.

This approach though can often break down, as such was the case of our farm, due to the unpredictability of the disease as well as the potential to disrupt the animal’s natural immunity developing.

An alternative method for farms with a recurrent lungworm problem is to use a vaccine – a more consistent approach to ensure low levels of the disease.

Vet Viewpoint is a regional monthly round-up of key veterinary issues from members of the XL Vets Group.