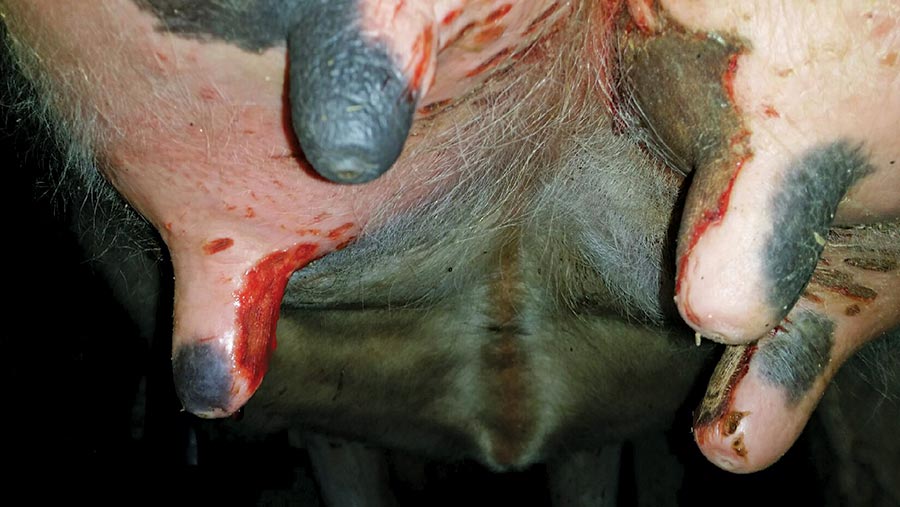 Vets are calling on farms to demystify a painful teat condition that can lead to stricken cows chewing off their own teats.

While there have been studies into the disease, scientists are yet to find a cause and cure. Culling animals, often in early lactation, is the only option for a growing number of herds.

Worst-known culling levels have been as high as 25% of heifers on a 400-cow, robot-milked dairy for two consecutive years, although affected farms typically report one or two cases a year.

Most cases are seen in high-yielding Holstein-Friesians, but cases in 5,000-litre lactation herds, cross-bred and Jersey herds have been reported too.

First described in Vet Record by Gloucestershire vet Roger Blowey in 2004, the condition has since been shown to have global implications, with Mr Blowey at the time reporting a “considerable increase” in cases over the previous year.

The ailment is now known to be affecting farms across the length and breadth of the UK and has been linked to the same causal bacteria behind digital dermatitis lesions, according to Al Manning at the Royal Veterinary College.

“Morbidity is quite high. However, mortality from the disease appears to be low, but most cases are removed from the herd as, without udders, they are useless as a dairy cow,” he said.

“Geographically, it seems to be much more widespread than we initially thought. We have received emails from around the world, as far away as Uruguay, with a disease which appears to be similar.”

Along with researchers at Liverpool University, Mr Manning is keen to hear from as many farmers as possible to share accounts of ITN to help secure grants for research.

Farmers are urged to send in:

“It usually starts with a dry, scabby lesion at the base of the teat, most commonly in heifers,” Mr Manning said. “It progresses down the teat and can spread to the udder tissue.

“There is no formation of warts or blisters like in some other teat diseases. Ultimately, it is so painful that affected animals have been reported to chew their own teats off.

“Affected herds usually have only a handful of cases and currently very little is known about the disease.”

If you have ITN on your unit, you can send case information, details of herd losses and pictures of affected udders to Al Manning at the RVC (amanning@rvc.ac.uk), which is trying to identify risk factors for the disease and test treatments. At Liverpool University, Simon Clegg (s.r.clegg@liverpool.ac.uk) will soon be leading an AHDB- and government-funded research programme.