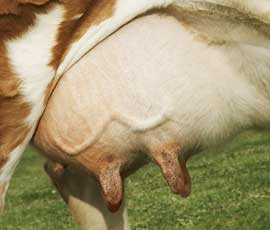 A major crackdown is to be launched into evidence that livestock exhibitors have used super glue as a teat sealant to boost udder conformation in their animals.

The glue prevents milk leakage and makes the udder swell. Other techniques to increase the size of the udder include addicting cows to the milk let-down hormone oxytocin and filling the udder with gas before sealing it.

The details were revealed at the British Veterinary Association Animal Welfare Discussion Foundation, at the Royal College of Physicians, London.

“To ensure a smooth junction between the udder and body wall, some inject cattle with a foreign material such as silver protein. This causes an oedematous reaction to smooth the join.” Sometimes cows would go into anaphylactic shock as a result,” he added.

He said these manipulative acts represented a breach of the Animal Welfare Act, which could carry a six-month prison sentence.

Speaking about the extent of manipulation of show stock, the BVA’s Andrew Praill said it was a “vociferous minority” involved and problems at last year’s Dairy Event and Livestock Show had been a catalyst for further investigation.

Although there was no doubt some malpractice was occurring in beef and sheep, the issue was more widely recognised in dairy, he added.

Steps could be taken to catch illegal practices such as ultra-sounding udders or blood testing, he said. Cows could also be stripped in the show ring to check they will release their milk.

Mr Martin said the crackdown needed to come from show organisers and breed societies and there was a real change among such organisations to tackle manipulation.

“We’re going to crack down. We perhaps won’t say when or where, but there will be a crackdown.”