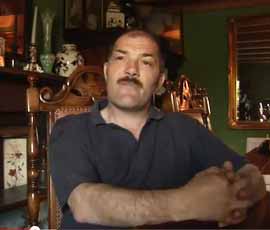 A film showing a devastated farmer watching the slaughter of his pedigree cattle due to bovine TB has been posted on the internet.

Footage shows award-winning Welsh farmer Dai Bevan forced to choose which of his pedigree Longhorn cattle should be slaughtered first.

“This is a disease that is an insidious, creeping cancerous disease I can do nothing about,” he says.

The 14-minute film has been viewed more than 1,000 times since it was posted on the video-sharing website YouTube on Sunday (13 May).

Mr Bevan featured in Sunday’s episode of the BBC Countryfile programme, where he was shown being interviewed by presenter Adam Henson before his cattle were killed.

But the YouTube film goes further, showing Mr Bevan’s prize-winning livestock being led into a cattle crush where they are slaughtered. The animals are then hoisted into a lorry and taken away.

Film-maker Chris Chapman said he posted the video on the internet because he believed it deserved a wider audience.

“I’m just hoping more and more people watch it and begin to understand the problems with this disease, he said.

“This is not an isolated case and as each year passes the preservation of the genetic pool from these fine pedigree herds, which people like Dai have rescued and improved, is put under threat.

“No amount of government compensation will ever remedy that. It’s an absolute tragedy.”