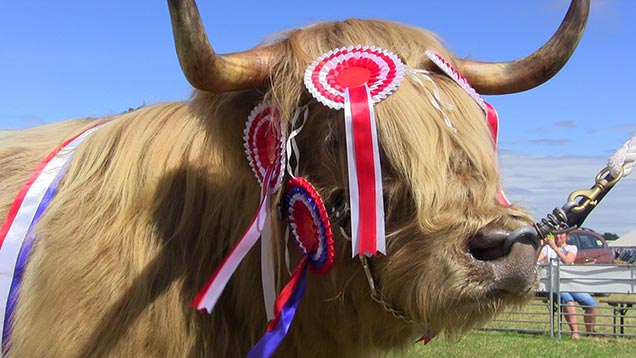 Bumper crowds poured in to the 172nd Chertsey Agricultural Show to enjoy a celebration of all things food and farming.

Although visitor numbers have yet to be counted, organisers said they were confident the show attracted a record crowd at Chertsey Meads, in Surrey.

Thousands turned out in the sunshine for the show on Saturday and Sunday (8-9 August), held annually on the 70ha showground, lying along the banks of the River Thames.

Visitors were treated to cattle, horse, donkey and dog shows, agricultural and vintage machinery and cars on display, plus ploughing and jousting sessions.

A fantastic display of livestock brought by farmers from across the country was among the highlights of this year’s show.

British pedigree beef and dairy, in particular a representation of Dexter cattle, the smallest native breed in the UK, and long-horned Highland cattle were on display in the cattle tent.

Judge Michael Minto awarded his supreme champion of the show to Isla (above), a five-year-old Highland Silver Dunn cow, owned by Mr and Mrs Jee, of Dorking, Surrey, who scooped the Michael Whitty Memorial Cup.

Michael Merryman, committee member of the Chertsey Agricultural Association, said: “We managed to get more animals coming this year, more than 50 cattle in total, which helped put on a really good show.

“Everybody has been around the rings watching it, thoroughly enjoying it.”

This year, more sheep than ever – 222 in total – were brought to the show, from traditional Lincoln Longwool to Shetlands, rare and primitive breeds as well as commercial and cross-breeds.

There were also 50 milking goats on show, including 11 different breeds, from farms in the South East, including Kent, Sussex and Cambridgeshire.

Ian and Erica Churchill, of Hurstpierpoint, West Sussex, were awarded the best goat in show for Hurstpier Clove (below), a three-year-old Anglo Nubian goat.

Hurtspier Clove notched her fifth Breed Challenge Certificate, which makes her a breed champion, subject to approval by the British Goat Society (BGS), who will check her milk for butterfat and protein content.

Berkshire farmer Colin Rayner, president of the Chertsey Agricultural Association, said he was “very impressed” by the level of commitment shown by local farmers to the show.

“The cattle lines, the sheep, the goats are very strong here. What surprises me is how young the members are showing the livestock,” added Mr Rayner.

“I think there is a future. Let’s just hope they can earn some money.”

Preparations are now under way for the Chertsey Ploughing Match, which takes place on Bank Holiday Monday (31 August).