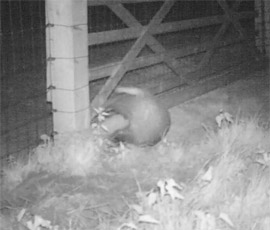 Badgers are being caught on camera raiding food stores at farms in the South West as part of research to help prevent the spread of bovine TB to cattle.

Surveillance cameras installed on 75 farms in the South West captured footage of badgers visiting farms as part of the Farm Assessment Toolkit project by the Animal Health and Veterinary Laboratories Agency.

The aim of the ongoing project is to help farmers take steps to “badger-proof” farm buildings and reduce the risk of TB spreading from wildlife to their herds.

A separate project by the South West TB Farm Advisory Service, to research the best materials farmers can use to help protect their holdings, has captured footage showing just how persistent badgers can be in trying to get access to buildings and fields.

Ian Vernon, from the AHVLA Wildlife Team running the Farm Assessment Toolkit project, said: “We had a fantastic take-up from our volunteer farms and we’ve spent the past few months installing cameras – the final ones will be going up in August. We’re also starting to conduct individual surveys to understand badger activity near the farm buildings and to record details of farming practices and landscape features.”

Mr Vernon added: “In some cases farmers have had no idea badgers are entering their buildings. On one of the farms from last year’s surveillance the cameras picked up images of badgers frequently visiting the feed store by squeezing under the gate. The farmer was able to fix a piece of wood to the bottom of the gate to prevent this.”

Ultimately, the agency hopes the study will help farmers decide whether to install biosecurity measures for their farms.

AHVLA is now writing to farmers with the results of the surveillance so they can consider additional measures such as secure gates and lockable feed bins to help protect areas that are susceptible to wildlife visits.

The second initiative, carried out by the South West TB Farm Advisory Service and Bicton College in Devon, has used video footage to test badger-proof equipment, such as fences and feed bins.

The advisory group filmed badgers accessing a field to use a latrine by squeezing through a 10.5cm gap between gate and post. Following further adjustments to the gate, the badger was unable to gain access despite repeated attempts lasting more than two hours.

Anthony Pope, lead adviser of the South West TB Farm Advisory Group, said: “The determination of badgers to enter the enclosure was quite astounding and highlights the challenge farmers have in keeping them from accessing different areas of their farms.

“We hope the project will inspire people to come up with new ideas for future badger-proof equipment to reduce contact between badgers and livestock and reduce the risk of spreading bovine TB from badgers to cattle.”