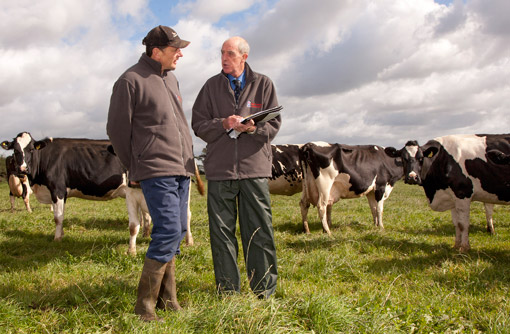 In its efforts to continue to improve dairy cow welfare, Red Tractor Assurance (RTA) is introducing changes to its assurance compliance standards and assessment measures.

Working with animal scientists at Bristol University and following consultation with its members, RTA has come up with a series of measures it hopes will encourage farmers to take a more detailed look at their herd welfare.

Previous measures farmers had to comply with will remain the same, but from 1 October additional measures will be added to the assurance process:

“Many farmers will already be doing it anyway so it won’t create any extra work for them. But this is progression and something lots of stakeholders have asked for.”
Emma Surman, RTA technical manager

“They also need to look at the stock and recommend actions if there are areas for improvement.”

While the record-keeping is necessary for compliance, the farmer doesn’t have to follow the vet’s recommendations. The idea is to generate discussions between the farmer and the vet, Miss Surman says.

“We didn’t want to set targets they had to meet as some might have costs associated which the farmer can’t afford, or the farmer may have already gone down that route.

“Many farmers will already be doing it anyway so it won’t create any extra work for them. But this is progression and something lots of stakeholders have asked for.”

During an assessment, assessors will score a random sample of 10 milking cows based on mobility, body condition, hair-loss, lesions and swellings and cleanliness. Scoring will be carried out by trained assessors and will be monitored to ensure it is carried out similarly and fairly from farm to farm.

Changes to the Red Tractor Dairy Scheme assessment aim to ensure more attention is given to cows during the assessment process.

From October, the assessor will carry out checks on ten random milking cows, which will be scored using DEFRA and DairyCo standards (see Better practice, above).

While the results have no direct link to certification, RTA hopes scoring the cows will encourage farmers and assessors to focus on the animals and talk about any issues relating to the herd.

“If an assessor picks up on an issue, it is likely to have a link to existing standards of management which are linked to non-conformance,” says Miss Surman.

“These changes are outcome-based. The main aim is to prove that the cow’s welfare is being improved by the inputs that the farmer is putting in.”

The data collected will be added to a national database to provide an indication of prevalence at a national level, she adds.

As Red Tractor dairy board chairman, Mr Madders was part of a farmer and industry advisor group which was tasked to review the scheme’s welfare standards.

“These changes are trying to encourage best-practice and open discussion, which can only be a good thing,” Mr Madders says.

“It makes sense from a business perspective because the better you look after your cows the more efficient and productive you will be.

“We feel strongly that we can make more progress with welfare by encouraging people to look at their numbers honestly and discuss them with their vet.”

Miss Surman says the changes should not be too arduous for farmers, but should have real benefits for their herd’s health and well-being.

“We get a lot of criticism that too much focus is on inputs rather than the actual welfare of the animals, and these changes hope to address that.

“Obviously we will get criticism that we haven’t gone as far as possible, but it’s a balancing act in doing the best for the animals and helping farmers achieve those outcomes.”