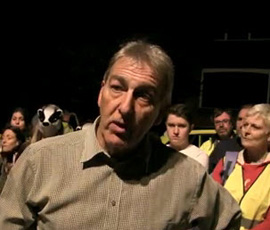 About 100 animal welfare campaigners joined a protest against plans for a badger cull to combat bovine TB in cattle.

The protestors say TB should be controlled by vaccinating badgers and cows, rather than a cull. But pro-cull farmers say an effective vaccine is too far off.