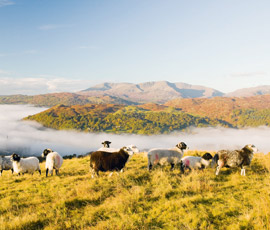 There is a distinct mood change in the livestock markets serving regions in Wales where farmers have received half their single farm payments early.

With money in the bank, an air of cautious optimism has returned and the worry of how feed and other bills will be paid has been lifted, at least for now.

Although not all farmers who lost livestock in the Arctic conditions have qualified for the Welsh government’s advance payment – because it applies to specific parishes – those that have received it admit it has come at a crucial time.

Alwyn Vaughan, who estimates that last winter’s blizzards cost him about £20,000, said it wasn’t just farmers who were relieved by the government’s decision to advance £23m. “At the local market this week the feed company representatives I spoke to were very pleased the farmers had been paid. It has been beneficial to the wider farming sector,” said Mr Vaughan, of Maes Mochnant Uchaf, Llanrhaeadr Ym Mochnant.

None of his ewes perished because he was able to house the flock in an indoor silage pit on his Montgomeryshire farm. But ewes lost lambs and those that did survive were so hungry they put huge demands on their mothers, triggering severe mastitis.

He worries for the productivity of the flock as the next lambing period approaches. “I think last winter is going to have a huge impact on this winter,” said Mr Vaughan.

In addition to his sheep enterprise, he also runs a dairy herd of 120 cows and rears beef and dairy calves. He said he was fortunate to have had another income source at a difficult time for the sheep sector but with large feed bills to pay after such a late spring, the early single farm payment has been hugely beneficial to his cashflow.

But Mr Vaughan warned that any benefits gained from the advance payments would be negated if there were a delay in paying the second half. “It would be a desperate situation if payments weren’t made at the beginning of December as has been the case in Wales for the last few years,” he said.