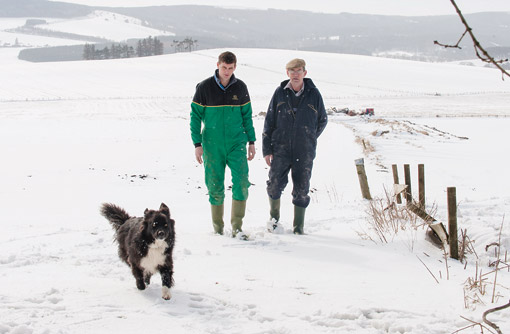 This time last year it was in the high 20s, this week it is barely above freezing during the day and -5C at night, what a difference a year can make. We started sowing on 11 March last year at home, this year we had 4in of snow and as April came in, the frost at night was making the snow slow to clear.

It is going to be a rush when spring eventually comes, with 60ha still to plough. Let’s hope the temperature rises and we get a good growing season.

If you don’t measure it you can’t fix it. With this in mind I ordered a new electronic head for our weighing crate. It arrived in time to weigh the pigs. I read the instructions and fitted it up, plugged it in, switched it on and waited, something wasn’t right. A phone call to the supplier and the connection or cable seemed to be the problem, so I plugged in the old head again, but nothing, I must have damaged the lead when I dismantled it. So that week we had no weigh crate. The new cable arrived and bingo, it all works. It weighs and records each pig, gives a total and average weight and we can download the information on to the PC so I am able to get an accurate daily liveweight gain and also see the spread of weights.

Easter school holidays have arrived and for the second year now that means lambing for Daniel, our 15 year old. He had 12 ewes lamb last year and has added another six this year. I hope the lambing is fast and finished before the end of the holidays or I will be lambing for him as he heads back to school.