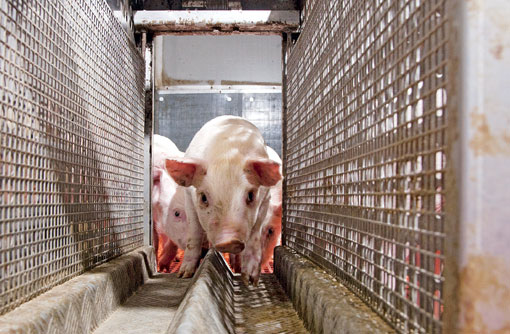 Tom Allen, who farms in partnership with his father, uncles and cousins near Wallingford, Oxfordshire, installed two weighing crates in one of their farm’s weaner and finisher pens to monitor daily weight gain and help spot where changes in feeding were needed.

The 3,500-place weaning-to-finishing unit runs a three-phase liquid feeding system in an effort to minimise stress to the herd and improve performance.

However, Mr Allen was struggling to identify exactly where further changes needed to be made to the farm’s feed curves to improve performance.

“I could see that their average performance was good and the animals were doing well in the weaner and grower sections, but for some reason growth was tailing off in the finisher section and I couldn’t tell when,” says Mr Allen.

“Because we have a complicated feeding system, it was difficult to say at exactly which point they were stopping growing.”

Pig growth after incorporating changes identified from using the scales:

Following a study trip to the Netherlands where he saw the weighing crates in action, Mr Allen installed two sets of scales in a weaner and finisher pen 10 months ago with the help of a BPEX grant.

The scales can be positioned anywhere in the pen and record each time a pig walks across the weighing platform, sending data to a computer system that calculates the pen’s average daily growth.

From that data, Mr Allen is able to easily identify at what stage blips are occurring in the pigs’ growth and where changes need to be made.

“I was concerned about the finishers and after a couple of batches we could see they were growing well to start with but tailing off in the later stages, so we adjusted the diet to keep the animals on higher-energy feed for a longer period,” he says.

Another blip in growth was during the change between creep and liquid feed, but moving from a gradual to an abrupt change has improved things.

While the system is not 100% accurate, Mr Allen says the scales are a good indication of growth and are considerably less time-consuming and less stressful for the pigs than weighing each pen by hand every day or week.

“There is a spray marker on top of the crate that puts a dab of paint on the pig and from that we have discovered about 90% of the pigs get weighed each day. Over three days in a group of 90 pigs only seven hadn’t been through the weigher numerous times.

“We end up with a fairly accurate average. I can compare the scales’ average with the weight when we weighed the whole pen at changeover from creep to liquid feed at 15kg, and it is within 0.2-0.3kg, which I’m very impressed with.

“The biggest problem is the weaners like to go to sleep on the scales, so you don’t get as many weighings as you’d like in the first few days until they learn there are more comfortable places to lie.”

Eventually Mr Allen would like to install crates in more pens to help him consistently reach his target of 800g/day growth from weaner to slaughter – a rate he knows could be improved further still.

He is also using the scales in genetic work on the unit to identify which genetics perform well, and is looking into other uses, such as marking pigs as soon as they reach 110kg and are ready to be sold.

While the scales can cost several thousand pounds, Mr Allen says the investment has been justifiable on his family’s unit.

“When you have a real problem and you are struggling to get to the bottom of it, it is a really useful tool and will earn you more than the cost of the scales once you’ve rectified the problem,” he says.

“We knew there were problems in our system but we couldn’t prove where they were. The data from the scales has allowed me to make a quicker response.

The building is run in three stages, with 8.5kg weaners split into two pens and fed two stages of creep until they reach 15kg. They are then weighed and changed over to a liquid weaner ration until they are 25kg.

They are then weighed and moved to the grower section, where they are split into two pens of large pigs and two of smaller pigs and fed a liquid blend of low- and high-powered ration, depending on their weight.

After 39 days the pigs are weighed again and moved into the finishing section, where they are gradually all placed on the low-powered ration until they are sold at 110kg.