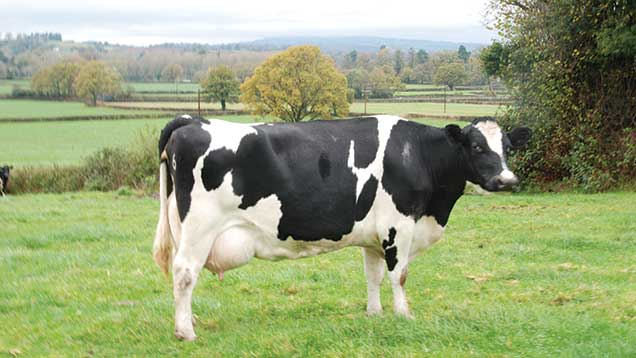 Small, family-run dairy herds are becoming few and far between as more businesses are forced to expand or get squeezed out of business by tightening milk prices. But one small dairy herd is bucking the trend.

By keeping things simple and making the most out of home-grown feed one Welsh dairy farm is proving bigger isn’t always better.

See also: Turning a profit from a small dairy farm

At White House Farm, Clytha, father and son John and Colin Morgan have been making a profit from their small herd of 100 British Friesian cross cows for the last 20 plus years.

They say the breed of cow has been a pivitol factor in the business’s survival during times of turbulent milk prices and the dairy herd has seen a few of these since it was established by John’s father in 1967.

Colin credits the Friesian breed for giving them versatility; producing milk and breeding animals with good conformation for their secondary beef enterprise, which he says subsidises the dairy business when the income from the milk cheque is low.

Facts about dairy farms in Wales

“In the last four years we have used 100% sexed-semen because we were getting a lot of bull calves and we’ve been very pleased with the results,” says John.

If they fail to conceive they are served with either conventional semen or run with the stock bull.

Meanwhile all heifers are run with a Limousin bull to calve by 30 – 32 months.

British Blue x heifers are either sold through Monmouthshire Market as bulling heifers or are sold with Limousin cross calves at foot and steers are sold as stores at 22-24 months of age. Store sales have been averaging £1,200 a piece, while heifers with calves at foot averaged £1,740 in the spring.

“Calves are kept in small groups of five and receive five litres of milk a day and ad-lib haylage,” explains Colin.

At six weeks they’re also offered a rearing nut, up until weaning at 10-12 weeks.

Steers are separated from heifers at 18-months and heifers are kept in the dry cow cubicles up until calving. Youngstock, such as steers and in-calf heifers are grazed outdoors until November, much like the dairy herd.

Cows are milked twice a day through a 11:22 herringbone parlour, which was been extended from a 6:12 three years ago to cut milking time in half, and are currently averaging 7,580 litres a cow a year.

Milk is sold to Cotteswold Dairies on a constituent contract achieving 30p/litre and margin over purchased feed (MOPF) is 24p/litre.

Colin attributes the fact they’re able to keep feed costs below 6p a litre to producing high-quality feed in house.

Altogether they grow 24ha of wheat and barley and a further 12ha of maize.

“We’re lucky we can grow maize and cereal, plus good clover grass. Others in west Wales are not so fortunate,” admits John.

This year a 25% protein blend has been bought-in to supplement poorer-than-usual grass silage that analysed 10.2 MJ/kg DM of ME, and 66.9% D value.

Milkers are fed cake to yield in the parlour all year round – alongside homegrown wheat and barley which is “milled and mixed” on farm – up to a maximum of 10kg a head a day.

A ration of 50:50 maize and grass silage is offered in ring feeders from October until spring turnout, which eliminates the need for a mixer wagon.

By not over complicating herd management labour costs are kept to a minimum day-to-day, says Colin.

“Labour is a massive cost on farms and by keeping things in the family – my brother Steve lends a hand at silage time and relief milking – we are able to do a lot of the work ourselves, taking a massive strain off the bottom line.”

In the summer months making the most of their cheapest resource – grass – helps drive further cost efficiencies. In fact, more than half of milk – 4,049 litres – is produced from forage alone.

“We don’t buffer feed forage in the summer months because it makes the cows lazy grazers which then results in the grass quality deteriorating,” explains John.

Good grassland management, along with breed hardiness, means cows can be kept outdoors from April to November.

Grassland is rotated every five years with maize and wheat or barley acting as break crops to keep leys young and productive.

“We have sheep graze all the grassland and stubble turnips from December to the end of March,” says Colin.  “This ensures we then have top quality grass for the spring and summer months,” he adds.

As soon as the sheep are removed fertiliser is spread, the ground is rolled and they aim to cut during the third week of May in a normal year before taking a second in July.

Improvements in cow facilities have further helped drive down costs.

Cows are housed in cubicles and making the switch from straw bedding to sand during a cubicle re-fit in 2008 has improved hygiene dramatically, with somatic cell counts falling from between 200,000-300,000 cells/ml in 2008 to 125,000 cells/ml currently.

“The cell counts used to go down in the spring and up in the autumn when they came in, but now it’s turned on its head,” says John.

Despite the fact the milk price has grown increasingly volatile in recent years, Colin and John believe there is still a place for small, family-run dairies, but they say to thrive you can’t rely on one income stream.

“It is all about not putting all your eggs in one basket,” says Colin.

John says you also have to know how to take the highs with the lows. He adds: “We’ve invested in the farm and the business when times are good and shut the door and only paid running costs in the poor times.”.