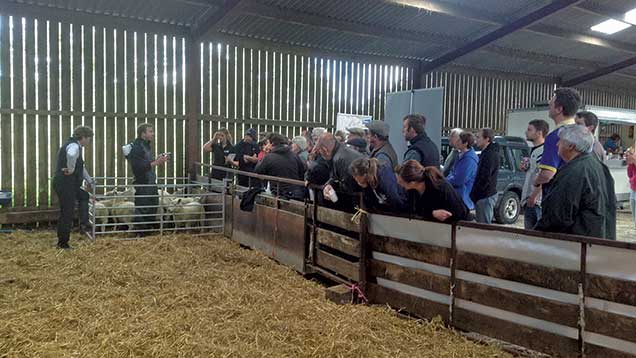 With lamb prices down, it is vital to get heavier lambs to market, but what if your lambs are not growing as well as you would like? Farmers Weekly reports.

“We had been struggling to fatten them on the farm,” explains Mr Williams.

Last year he gave his breeding ewes a cobalt, selenium and iodine bolus at a cost of £1/head, however it didn’t solve the problem entirely. The bolus lasted for 180 days.

“The lambs did well until weaning, but then they went backwards and didn’t recover.”

This year he took a soil analysis in March and found there was a cobalt deficiency. On the back of the results he decided to act before the deficiency knocked his lamb growth rates.

Working alongside his vet, Alun Davies of Market Hall Vets, St Clears, Carmarthenshire, and his SQP (Suitably Qualified Person) Sally Harmer of Clynderwen and Cardiganshire farmers, he carried out blood tests on 12 lambs.

As an experiment they bolused six of the 12 lambs at a cost of 59p/head and left the remaining lambs. The bolus lasted for 120 days and lambs must be over 25kg for it to be administered.

See also: How to make money from finishing stores

In late July Mr Davies then resampled the original 12 lambs to find out their response.

The bolused lambs showed a significant rise in cobalt levels, while those without the bolus had low cobalt. Selenium and iodine remained at the same, good levels. The treated lambs were much sharper,” explains Mr Davies.

Testing gave Mr Williams the confidence to bolus the rest of the lambs one month before weaning.

“We always advise farmers to test and retest. That way we have the evidence to choose the right product for the job,” explains Ms Harmer.

Mr Williams has also been monitoring worm burdens by conducting FECs (faecal egg counts), which is also helping to keep lamb performance on track by reducing worm burdens. Re-tests are carried out to ensure the product has been effective. Local knowledge is also key, says Ms Harmer.

“I sample other farms in our trading area, which gives me a useful overview of the potential level of parasites on the pasture at various times of year.

See also: How a Cheshire farmer has eradicated liver fluke from his flock

“We use different wormer actives at different times of the year. Paul has been using a white drench in the spring for nematodirus, and then switching to a clear or a yellow in the late spring. We then move to a clear in the autumn. Product choice is also influenced by the length of action of product, when lambs are to be slaughtered and the withdrawal period of the product.”

“We now weigh the heaviest two or three lambs and dose to them, and we ensure the drenching gun is calibrated correctly,” says Mr Williams.

He adds: “Years ago we would use the cheapest drench and assume it did the job, but underdosing can create the right conditions for resistance and over dosing wastes money. If you do the egg counts and weigh properly, you don’t need to worry. If you don’t do these simple things, you’re shooting yourself in the foot.”

This year Mr Williams weaned about 1,500 lambs, and since, bolusing performance across the crop has improved.

“Our lambs have thrived this year, and I know 100 % this is because we’ve solved the cobalt issue. I’ve noticed weight gain across the board and we’ve had better killing out percentages,” says Mr Williams.

The six original lambs that were bolused weighed on average 2.1kg heavier than the six without the bolus.

And despite the low lamb prices, the extra weight they gained, means the costs of the tests and the boluses have more than paid for themselves.

“We can’t do much about this year’s poor prices, but we can do something about the health and status of the lambs.

“As a farmer you want your lambs to be as good as they can be. Before, I felt I was doing something wrong. Now we have the blood tests results and no one can argue with them,” adds Mr Williams.

“Times are tough, but there is support out there; working with my vet and SQP has been crucial. Under Sally’s guidance, I’ve been keeping records, which lets me compare one year to the next, spot persistent problems and so on. We’ve learned a lot of lessons, but this year we got it right – fields full of thriving lambs is the best reward a farmer can hope for,” adds Mr Williams.