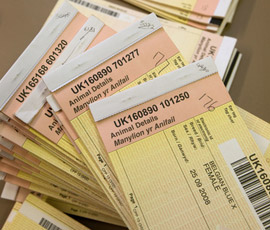 About 70% of Welsh farmers fail to report cattle movements within the required three days, a farming conference has heard.

The figure was revealed by Wales’ farming minister, Alun Davies, at the Wales Farming Conference in Llandrindod Wells on Thursday (23 May).

Mr Davies described the figure as disappointing and urged farmers to become more professional in their approach. He insisted there was no excuse for failure to report cattle movements.

“We can’t simply ignore rules and regulations,” he told farmers attending the conference.

Regulation was also a theme seized by Wales’ first minister, Carwyn Jones, who opened the event. Mr Jones insisted that regulation had an important role to play in agriculture and gave people confidence in the food produced in Wales.

“People don’t want less regulation in agriculture, they want a system they can have confidence in. People want to know that food is safe,” said Mr Jones. But he admitted that regulation had to be proportionate and that the Welsh government Working Smarter review of farming regulation was addressing this.