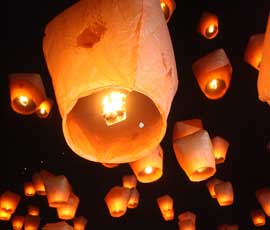 The Welsh government has put out a tender for an investigation into Chinese lanterns and their effect on livestock.

Following years of sustained lobbying by NFU Cymru, the Welsh government, along with DEFRA, have confirmed they will launch an independent study to identify the way sky lanterns affect animal welfare and the environment.

NFU Cymru has lobbied endlessly for a ban on the sale and release of these lanterns. Its president, Ed Bailey, said the union was delighted that the government “had taken its first step by tendering for this study. I very much hope the study will provide the evidence base needed to introduce a ban”.

Chinese lanterns are popular at outdoor social events, including weddings, parties and barbecues. But when the lanterns come down in fields they can kill livestock, farmers have warned.

“Inevitably what goes up must come down and when a lantern lands in a field, all too often their wire frames end up being chopped up into small pieces when grass is cut for silage. And unfortunately livestock will end up eating fragments of the wire from the lantern, which has found its way into the silage the animals are fed,” said Mr Bailey.

“If swallowed, the wire can puncture the stomach lining, causing extreme pain and in some cases it can be fatal to the animal.”

The wire part of the frame can get entangled around an animal’s foot and become embedded in the skin, which also causes unnecessary pain and distress.

Sky lanterns also pose a serious risk when they land in a field of crops or straw, or even worse, if they come down near a straw or hay barn that can ignite.

Farmers and farming unions, including the NFU, have been campaigning for DEFRA to impose a ban on Chinese lanterns. In October, the government department announced it had launched an inquiry to assess the risks to livestock posed by Chinese lanterns.