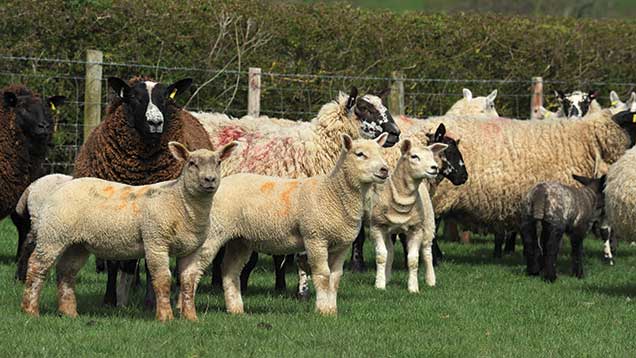 Welsh Mules are the breed of choice for the host of Welsh Sheep 2015 thanks to their big lamb crops and fast growth rates.

Uncertainty persists over future direct payments in Wales, but a Welsh livestock farmer is making radical changes to shore up his business against subsidy cuts.

But continuity is key in one aspect of his system. The Welsh Mule will remain the breed of choice in Mr Powell’s flock of 1,600 breeding ewes and hoggets.

He is enthusiastic about the Welsh Mule’s role in modern sheep production, insisting that it produces everything the market requires. “The ewes are good mothers, they lamb easily and are milky.’’

Mr Powell also favours the breed’s prolificacy. “We scan at 205% and achieve 195% lambs sold. This is a numbers game and the Welsh Mule gives us that prolificacy.’’

He runs Glanmiheli Farm, near Kerry, Powys, with his wife Anabel, son Lloyd, and daughters Rosie and Billie-Jo.

Together with Mr Powell’s brother and sister-in-law, Morton and Mandy, and their family, they will host the National Sheep Association’s Welsh Sheep 2015 on 19 May.

At Glanmiheli, White Mules are produced as replacements and there is a pedigree Beulah flock to produce Brown Mule and Beulah replacements.

The Brown Mules are crossed with Suffolks, and the White Mules with Charollais and Texels. The flock lambs from mid-February and the lambs are sold at Welshpool market at a target liveweight of 40kg.

Mr Powell says he has tried other breeds but has always reverted to the Welsh Mule. “We can put a Suffolk on a Welsh Mule and sell the lamb at 12 weeks old at 40kg liveweight or 19kg deadweight.

“They are easy lambing and the lambs have tremendous feed conversion efficiency; they grow like hell.’’

Mr Powell insists sheep have a future on his farm but he is making changes to other parts of the business to secure it against lower subsidy payments and fluctuating lamb prices.

“I was brought up with sheep and enjoyed them, but I want to build some security into the business with my son Lloyd coming in. He is keen and has new ideas, so we are changing direction.”

Glanmiheli had been run as an organic farm since 2005 but last year, when the Powells made the decision to invest in a 500kW anaerobic digester, they reverted to a conventional system because the farm will grow forage maize and hybrid rye as feedstock for the plant.

“We had been growing 40ha (100 acres) of wheat and barley for the cattle but all that land will now be planted with forage maize and hybrid rye,’’ Mr Powell explains.

“Since we went out of organic production we can grow more grass so we can keep the same number of stock on half the acreage and use the rest of the land to grow feedstock.’’

The plant will also run on poultry litter from the farm’s 16,000 laying hens and cattle slurry will account for 5% of the feedstock.

The plant will be operational this autumn with electricity sold to the national grid. Although it represents a significant investment, Mr Powell hopes the digester will pay for itself in less than seven years.

The Powells will receive a payment of 12.6p/kWh under the government’s Feed-in Tariffs scheme if the plant is operational by 30 September.

There is capacity to store the digestate for four months until it can be used on the land.

Another change the Powells are making is switching suckler breed – to Salers from Belgian Blue-crosses and Limousin-crosses.

Thirty purebred Salers were bought from Ireland and the heifers from these are being retained. The aim is to have a 130-cow herd within three years.

The Powells adopt the same principles for selecting Salers as for Welsh Mules. “You can put a Charolais on a Saler and get the same benefits as you achieve from putting a Suffolk to a Welsh Mule. You may not get the highest grades but the daily liveweight gains are tremendous,’’ says Mr Powell.

He was also drawn to the Saler by its reputation for hardiness, milking ability and easy calving. “We have had them for two years and I haven’t seen one calf born; the cows just get on with it.’’

Calves are sold as stores at Welshpool market at around eight months old. Previously, the beef system included buying in cattle and finishing around 400 a year on home-grown crops. Store production means this land can be released to produce crops as AD feedstock. Calves will be reared on bought-in straw and molasses.

Although Mr Powell no longer farms organically he continues to embrace many principles he learned from that system. “We have learned how to grow grass with clover and keep leys fresh and young. Organic farming taught us a lot.’’