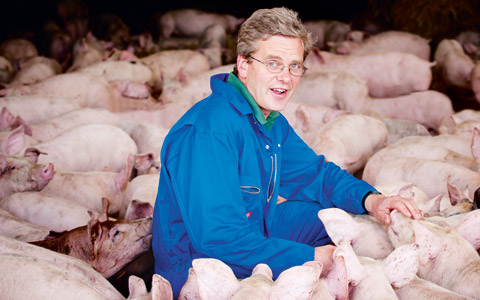 A move to wet feeding and the use of new technology to weigh animals has paid dividends for one Scottish pig producer looking to boost efficiency.

Regular monitoring of growth rates, topped with a new approach to feeding has improved weaner growth rates on a Scottish pig unit, where profitability is reliant on being as efficient as possible.

In fact 2010 Farmers Weekly Pig Farmer of the Year finalist Roderic Bruce has managed to increase weaner growth rates by 20% on his 350-sow indoor unit in Aberdeenshire, Scotland.

Mr Bruce, who is an Asda Pork Link Producer via the Scottish Pork Producers co-operative, has been part of Quality Meat Scotland’s monitor farms scheme for the past few years – an initiative he joined in a bid to improve performance.

He says: “I wanted to improve my performance and saw being part of the monitor farms scheme as a super opportunity to do that. The group looked at the financial performance and profitability of the whole farm business, and then compared it with industry benchmarks and identified areas where it could be improved.”

As part of the monitor farms scheme, new video cameras were installed on the farm to regularly calculate the weight of weaners, without any additional labour costs.

“One of the things that was poorest on the farm was the growth rates of the weaners; they were not growing fast enough,” says Mr Bruce.

“So one of the first things we did was put in qscan cameras, which take an image of the pigs and then computer software works out what their weight is; I started off with four but there are 20 cameras on the farm now.”

The cameras, which were developed by Innovent Technology, are essentially a herd monitoring system which measures the growth rates of the animals using visual imaging. The cameras allow producers to measure actual growth rates against predicted rates, and help highlight any under or over-achievers in the herd.

“The qscan cameras mean that day by day we know what the pigs’ growth rates are, which is something we cannot do ourselves even if we weigh them weekly because it tends to go up and down. And in all the system has been quite accurate, which is really quite exciting,” says Mr Bruce.

He says by using the cameras to measure real-time growth rates, he discovered the first few days of growth were the poorest, highlighting an area for improvement in the business.

Mr Bruce says: “How poor the growth rates were in those first few days was a real surprise to us, so we started doing things to try and stimulate the pigs to grow better, and we did some trials with different feeds.

“Some people suggested ribena, and the pigs did seem to drink that, while the qscan showed us they were growing faster. So we then went on to feeding them a gruel in the first few days but the trouble was weaning them off it.”

To take advantage of these improved growth rates from wet feed, while tackling the weaning problem, an automated wet feeding system was installed.

Mr Bruce says: “I had already wanted to put in automated feeding so I have done both that and the wet feeding together now; it has really improved the growth rates and the qscan system is allowing us to monitor that improvement so we can keep changing.

“Because although the wet feeding system has been in for a year now, we are still learning and having to improve the way in which we do it.”

As a result of switching to this feeding system system, the weaner growth rates have increased from 370g/day to 450g/day – an overall increase of 21%, and a key driver in the business profitability, according to Mr Bruce.

He adds: “The cameras are a great advantage on the farm because I have learnt that we have got to keep measuring things and we cannot just look at pigs and think that they are doing well or not. And they allow us to monitor the pigs without the extra labour costs.”

And as well as the qscan cameras, the QMS monitor scheme project paid for a weigh platform to be installed on the farm to allow Mr Bruce and his team to weigh batches of pigs.

“It’s important to weigh, measure and record, and in the past we used to weigh more pigs because we had the labour on the farm to do it, but we have had to cut back on that to try and save costs. And this new system has made measuring far easier than it used to be,” adds Mr Bruce.

“The wet feeding system tells me how much feed each pen gets and I can get the weight information from the qscan so I can work out a feed conversion ratio and cost for liveweight gain. We record everything on a computer recording system; if you don’t monitor it you cannot manage it.”

In addition to these improvements with feeding and monitoring, the QMS monitor scheme funded the installation of an energy monitoring system – Barn Report from Farmex – in a bid to curve unnecessary electricity use on Mr Bruce’s farm.

He says: “The system monitors my buildings with energy monitors on all the consuming things like heating, lighting, ventilation, as well as extra sensors to measure temperature. As a result I have been able to pinpoint where I was using more energy than I should have been.”

And one area where energy use has been improved is heating and ventilation in the buildings.

“Our energy usage is now much closer to what it should be; producers should be doing this when they put up new buildings, because compared with what you spend on energy, it’s a good investment.”