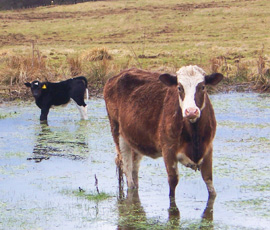 Usually farmers would have completed their first cut by now, and would be looking towards their second. But many have been unable to make a start.

Beef farmer Robert Neill, from Upper Nisbet in the Scottish Borders is one of many northern producers affected by the recent heavy rainfall.

“The weather has been a nightmare,” he said. “We are currently stuck halfway through our first cut.

“We’ve already had two tractors and trailers stuck because of the wet conditions. It’s a very start-stop job. The quality is going poorer, but we have got lots of it.”

Mr Neill, who also grows 240ha of cereal, is concerned he will have to supplement the feed he gives his 300-head herd with concentrate to improve the quality.

“We will probably have to find more concentrate, which will affect our bottom line, because we won’t be able to sell as much cereal,” he said.

Vets are also warning farmers to look out for clinical signs of worms as the wet weather shows no signs of abating.

“The weather has resulted in a resurgence in worm problems which are causing a serious problem, especially in lambs,” said John Macfarlane of Alnorthumbria Veterinary Group.

Cattle grazing on waterlogged areas could also be at risk from the parasite Rumen Fluke, and one case has already been identified in the North, he added. For information on clinical signs visit our worm academy.

Farmers have been battling torrential rainfall up-and-down the country and flood alerts remain in place in Wales, north-east Scotland and south-east England.

The Met Office is expected to confirm tomorrow (Tuesday) that June has been the wettest June on record to-date.