The 60-pen unit was designed by Matthew Jones, who runs Nantgoch Farm, Oswestry, with his parents, Bryn and Bev.

Matthew gave us a tour of the unit as part of our What’s In Your Livestock Shed series.

Why did you build a new calf rearing shed at Nantgoch?

The facilities we had were designed for when the farm was milking 300 cows. We now have 750 in the herd so basically, we had outgrown the set-up. 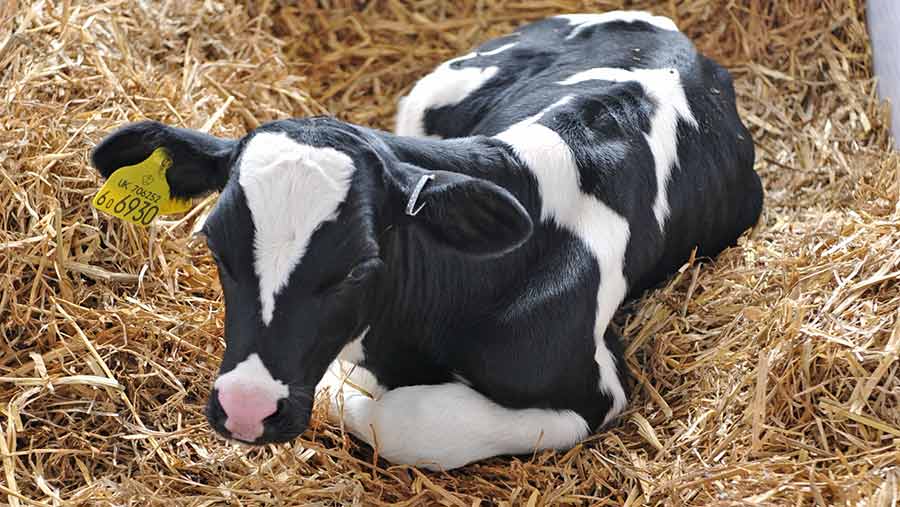 It wasn’t a great system. We were putting the calves where we could and there was overstocking of pens. Young calves were getting a knock at this stage and this was affecting their growth rates.

When we had an outbreak of illness it would spread rapidly and we would get a lot of sick calves.

We were losing calves to pneumonia, cryptosporidium, scours and mycoplasma. 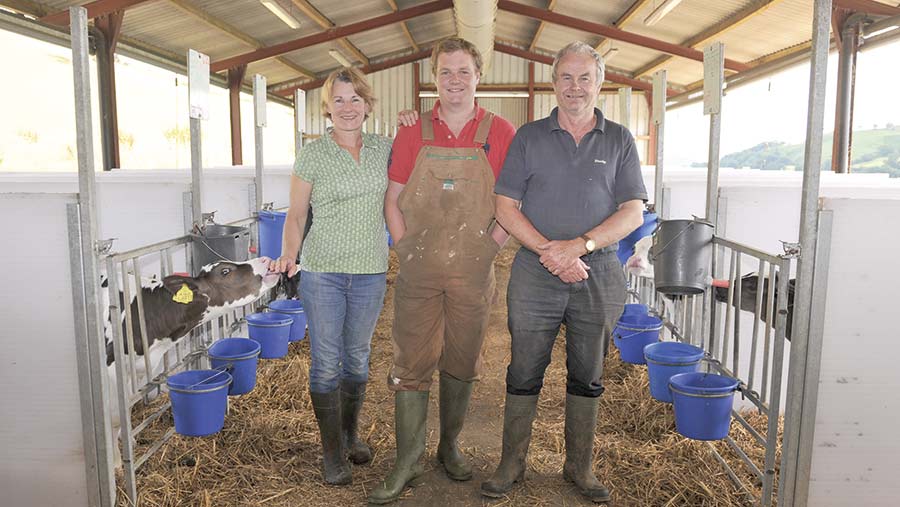 I visited several farms to see what others were doing but I didn’t see anything suitable.

The main problem I kept coming across was overstocking. 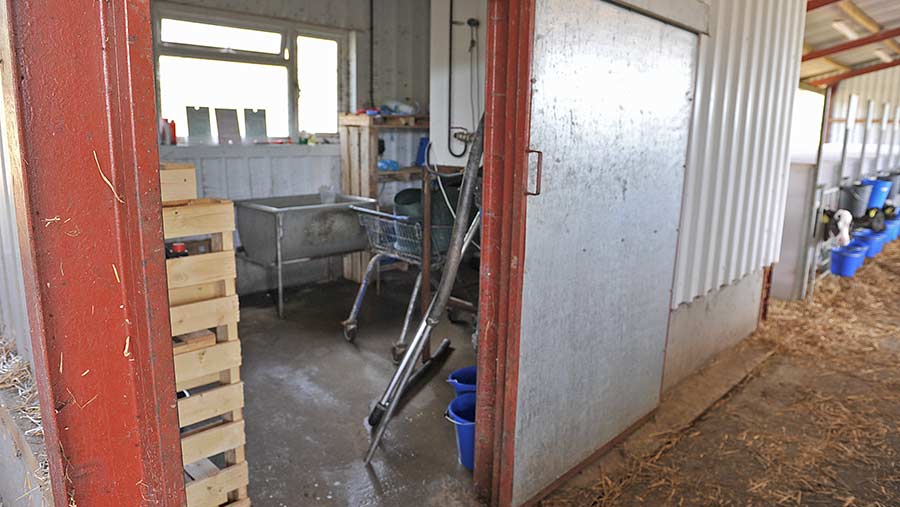 There were too many calves being kept in tiny areas.

Our vet, Rob Edwards, of Cain Farm Vets, put me in touch with Ken Nordlund of the University of Wisconsin, who is an expert in calf housing.

With his advice and input from Rob, we designed a shed that would be superb for calf health and for the calf feeder.

A lot of the systems I had seen only achieved one or the other.

Hutches, for instance, are good for calves, but in my opinion terrible for the rearer. I hadn’t seen one that delivered both.

The shed is based on hutches with a roof so it has all the benefits of hutches, but a nicer place for people to work in.

How was it constructed and by who?

We built the shed in August 2014 using a local builder, Richard Evans. I project-managed the construction.

I wanted the shed to be south-facing to avoid the sun beating down on the calves at the hottest time of the day.

It was built on a greenfield site because we wanted a position away from the cows, so they weren’t sharing the same airspace. 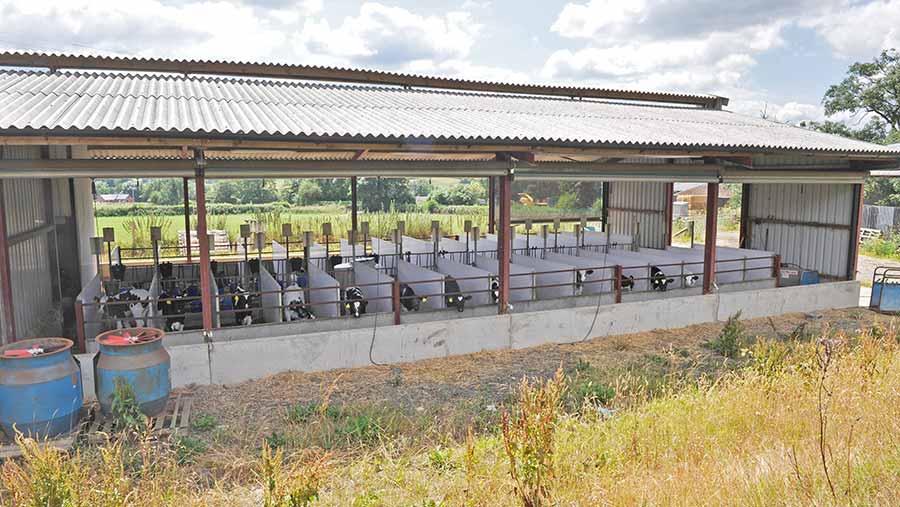 We didn’t have a suitable site so we approached a neighbour and we are leasing an acre of land from him on a 20-year agreement.

Tell us about the shed’s specifications?

It is an open steel-frame building with a 2ft high exterior panel wall. It measures 120ft by 30ft with a cement fibre roof and a 3ft overhang on each side.

There is a 6in open roof ridge with a 3in gap to act as a chimney for air to circulate. There is also a ventilation tube to force clean air in. 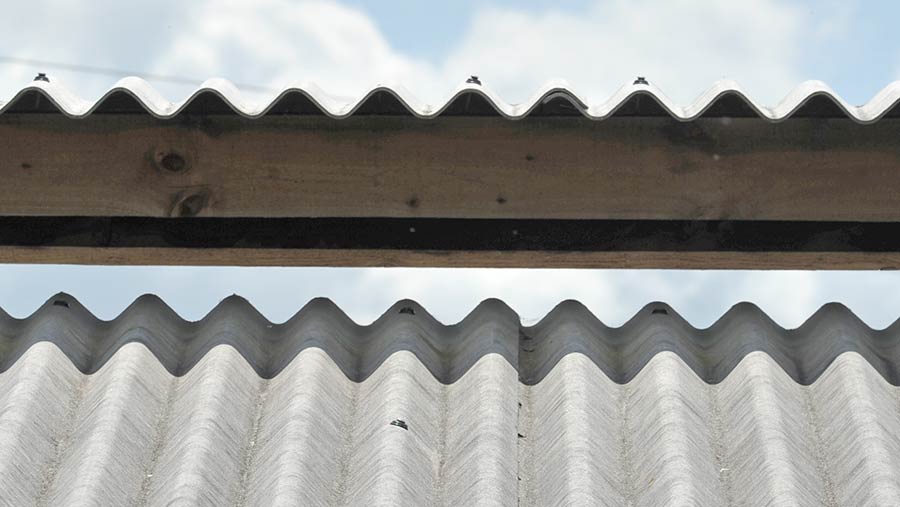 We purposely didn’t include roof lights because we want to keep the sunlight out to minimise heat stress on calves.

There are 60 pens in total – 30 on each side – and there is a 4% gradient sloping into the central passage to allow moisture to drain from the pens.

Each pen is 8ft by 3ft which gives us 24ft of floor space per calf. 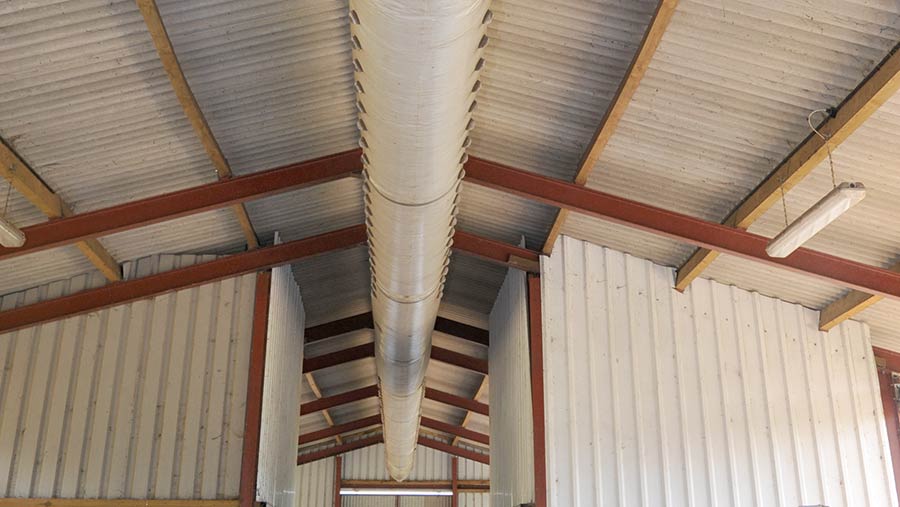 Additional pens have been sacrificed to accommodate a mixing room, which we have positioned in the middle of the shed.

We also have a storage room opposite that, for the calf powder and pellets.

The swing gates. In the old pens, we had to remove a pin to open the gate but it was a fiddle so most of the time we ended up climbing in. All we need to do now is to undo a latch. 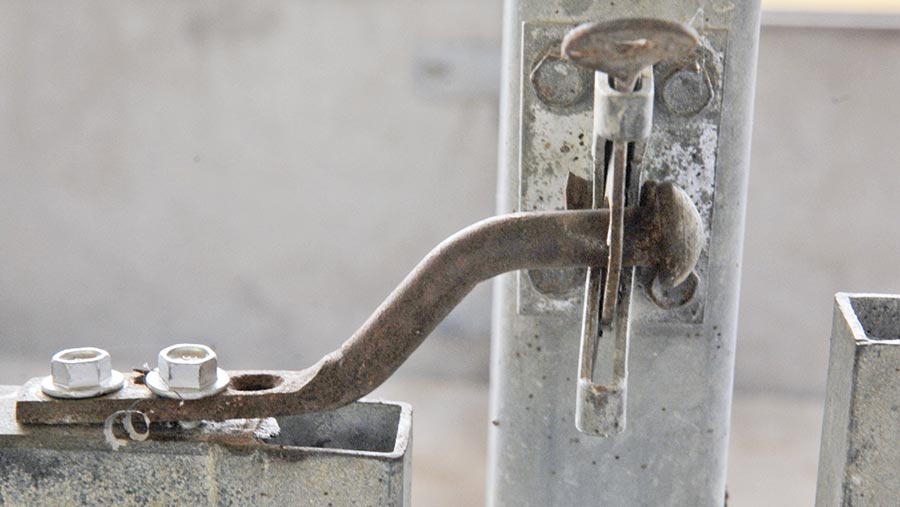 The pen gates open with a simple latch © Debbie James

I also like the noticeboards on the front of each pen.

We can include details such as calf age, how much colostrum they have had, how much they are drinking. It helps when you have different people managing the calves.

What has been your best buy and why?

They are very easy to clean.

We just hose them down with a pressure washer. 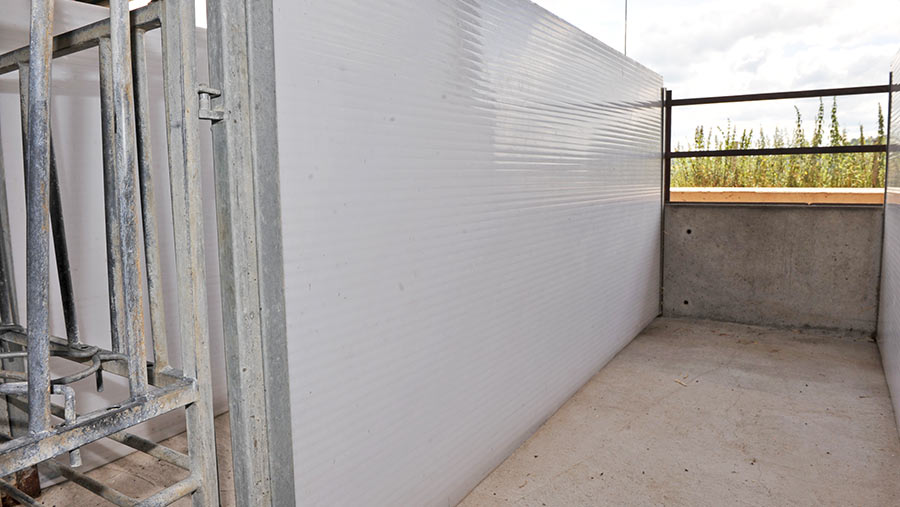 The panels are removable and it takes just three or four minutes to clean them on each side.

They look as new today as the day we bought them. I think they will outlast the shed.

We wouldn’t fit the gale-breakers as I don’t think they will ever pay for themselves.

We should have gone for a cheaper, simpler system, perhaps folding blinds instead of sprung blinds. 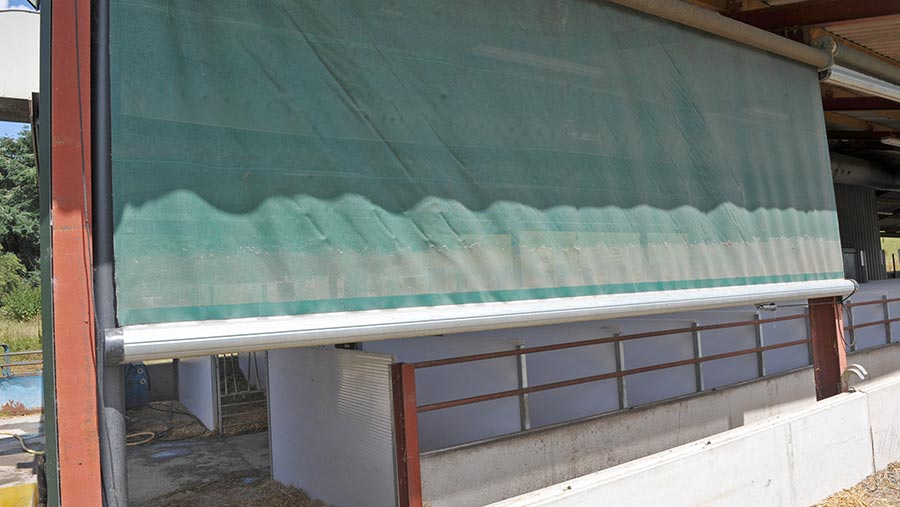 Galebreakers have not proved as successful as hoped © Debbie James

A 3ft wide passage behind each row of pens was created for ventilation but it has been an unexpected benefit for access.

What is your top tip for calf rearing?

It is worth spending an extra 10 minutes getting a calf to suck their first feed rather than tubing.

We only tube very occasionally but after that, they don’t seem to trust us, and we will struggle to get them to suck.

There has been a remarkable turnaround in calf health since the new shed was built at Nantgoch. 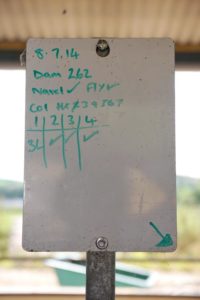 Between April 2016 and March 2017, 400 calves were reared in the shed and there were just five mortalities in calves under a month old.

Bev Jones oversees calf rearing and her attention to detail is second to none, says son Matthew.

Calves receive four litres of colostrum for their first four feeds and this is tested for quality.

After the fourth feed, calves receive four litres a day of a 23% protein milk replacer, fed over two feeds, increasing to a maximum of six litres a day at 2.5 weeks.

Clean water and an 18% protein calf nut are also provided.

All buckets are cleaned daily with soapy water and a squirt of hypochlorite.

Calves are moved into groups of eight at three to four weeks.

When the youngest is five weeks old, the process of weaning that group begins, by reducing milk to four litres a day over a few days and moving to once-a-day feeding. 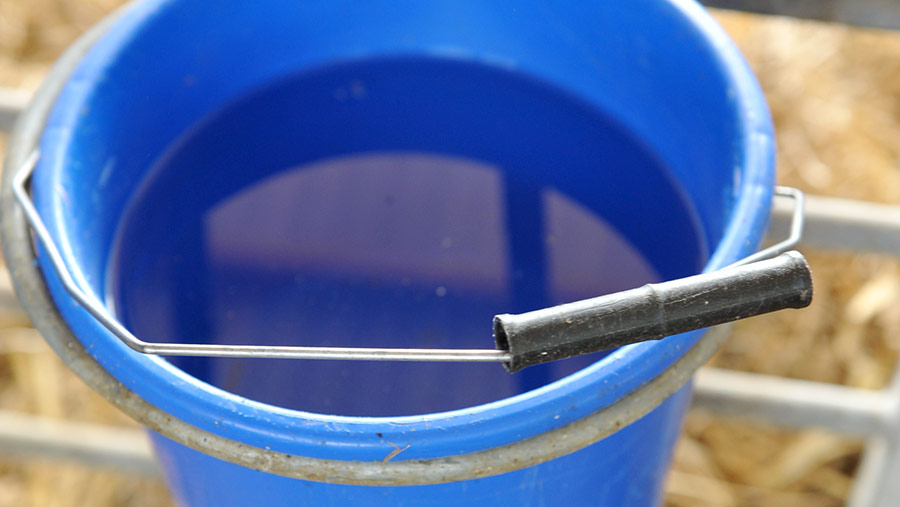 “We continue to reduce the milk fed as the nut intake increases,” says Bev.

“Once they are eating 1.5kg, we wean over the course of a week, with the aim being to have them off milk and eating about 2kg by eight weeks.

“By 10 weeks they should be eating 3kg and ad-lib straw, which they are offered from day one.”