A purpose-built youngstock shed has reduced labour requirements and improved the health of heifer replacements at a Welsh dairy farm.

The Jones family returned to milk production in 2012 after dispersing the original Larchwood herd in 2002 following the foot-and-mouth crisis.

Larchwood Holsteins, based at Storefield Farm, near Magor, Monmouthshire, now comprises 120 pedigree cows and 160 followers, and the family has ambitions to double the herd in the next couple of years.

To meet expansion targets more than 40% of milking animals are in their first lactation. A priority is to maintain genetic progress as well a high level of milk production.

To achieve this, the family recognises youngstock have to get off to the best possible start and in 2016 they built a new shed to house the herd’s 120 heifer replacements.

Carys, who recently joined her parents, Jeff and Sian, in the farm partnership after spending four-and-a-half years working as a chartered surveyor, gave us a tour of the building. 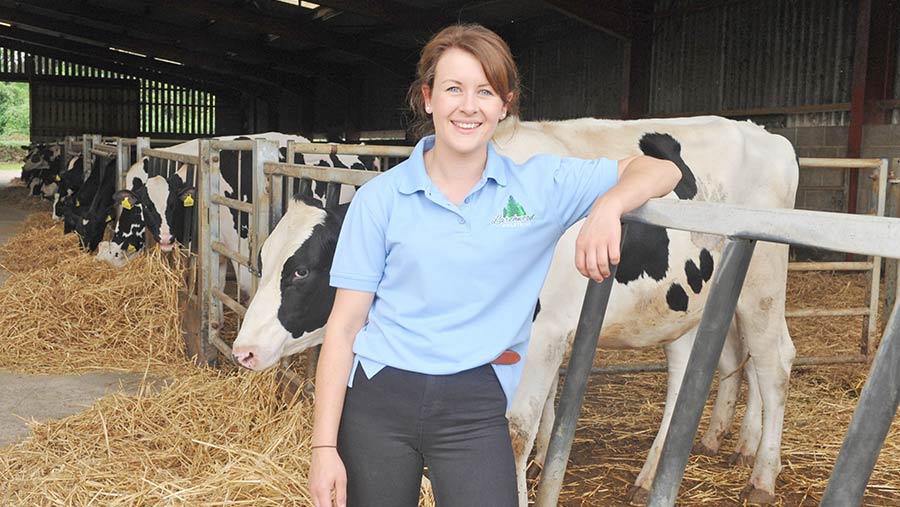 Why did you build the shed?

We had a TB breakdown in 2014 and the herd was shut down for two years which made life incredibly difficult.

Not only did we lose some invaluable pedigree animals but we were forced to keep all replacement stock. 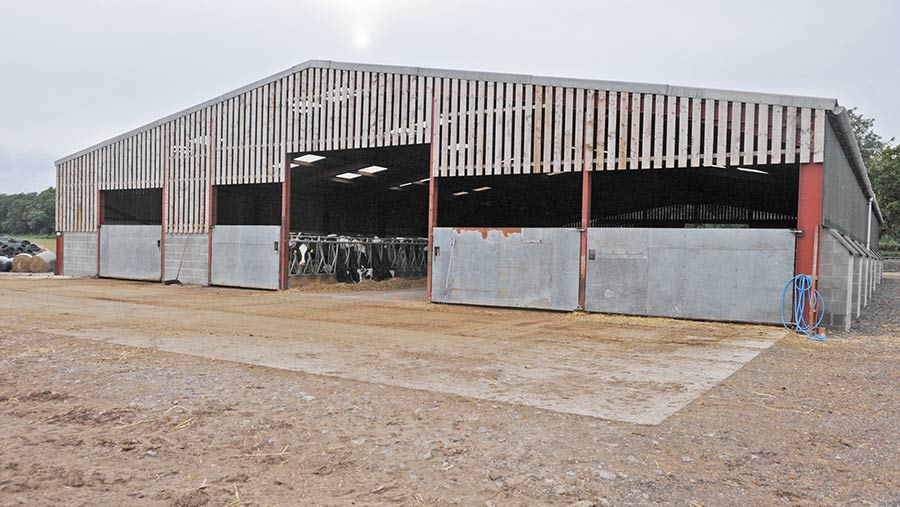 It was quickly decided we would house all of our youngstock to try to prevent another breakdown in the future and, fingers crossed, our strategy seems to be working, as we have been clear of TB since 2016.

Weaned calves and maiden heifers had previously been housed in accommodation next to the milking herd, with in-calf heifers grazed on off-lying land.

We wanted our youngstock housed in a separate building away from the main herd, to allow us to achieve high health status and minimise our use of antibiotics.

We already had a shed located on a separate site that had previously been used for the DIY equine business.

The shed had a concrete floor and was fitted with American-style timber looseboxes with an all-weather surface ménage to the rear.

We took the decision to extend and convert the existing equine building, rather than start again from scratch.

The whole project cost £50,000 and all building work was completed in-house. To build the equivalent accommodation on a new greenfield site would have cost about £150,000.

The shed is a steel portal frame construction measuring 135x75ft – approximately 10,125 sq ft in total. It is 12ft high to the eaves and has a standard 15deg pitch roof.

The external walls are in part constructed of concrete blocks with ventilated sheeting from the top of the blocks to the roof. 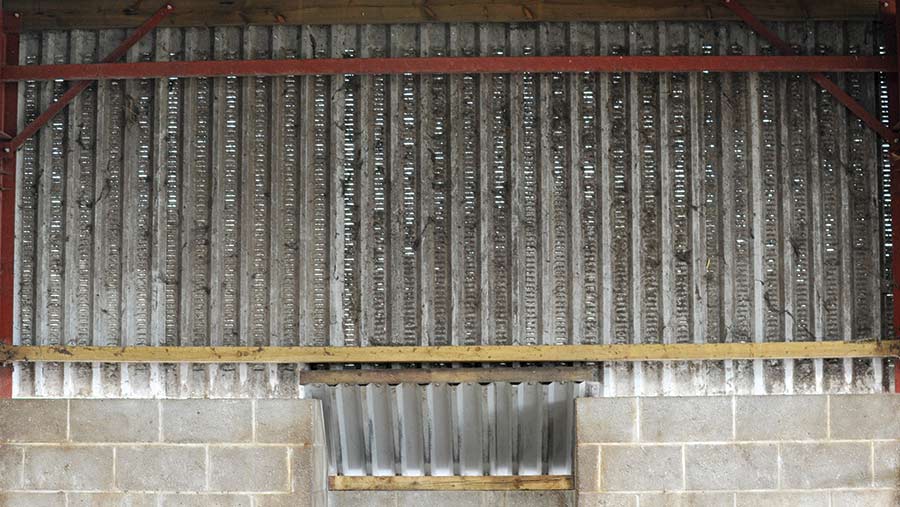 There is Yorkshire boarding on the top half of each of the gable ends on the central feed elevations and the roof benefits from a central vented ridge.

There are eight loose housing pens on one side of the shed, intended for weaned calves through to yearlings. On the opposite side, there are 72 sand-bedded cubicle stalls in three separate pens.

The cubicles range from 3ft 9in beds for larger heifers to 3ft 3in cubicles for younger heifers. 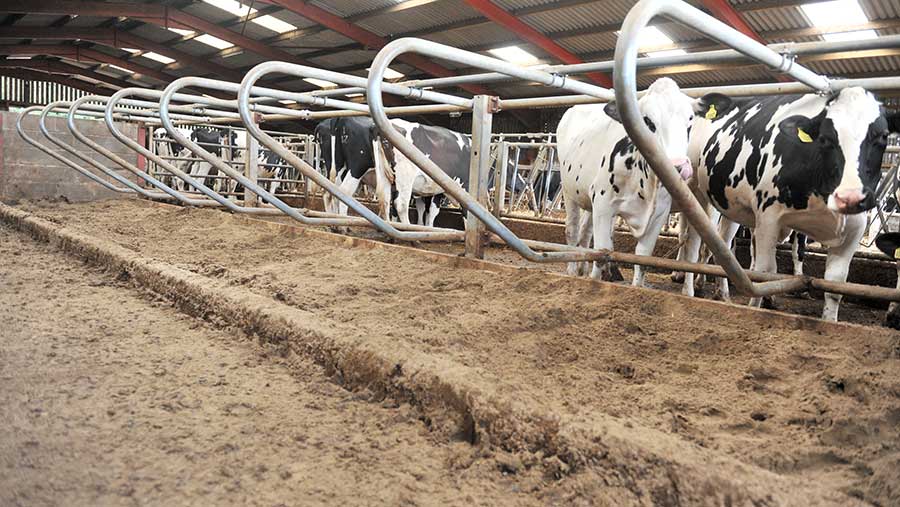 There are also youngstock yokes fitted for ease of handling, and every cubicle has the equivalent feed space at the barrier.

The shed is fitted with tip-over water tanks and the concrete feed passageways and scrape passageways are grooved to ensure high animal welfare. 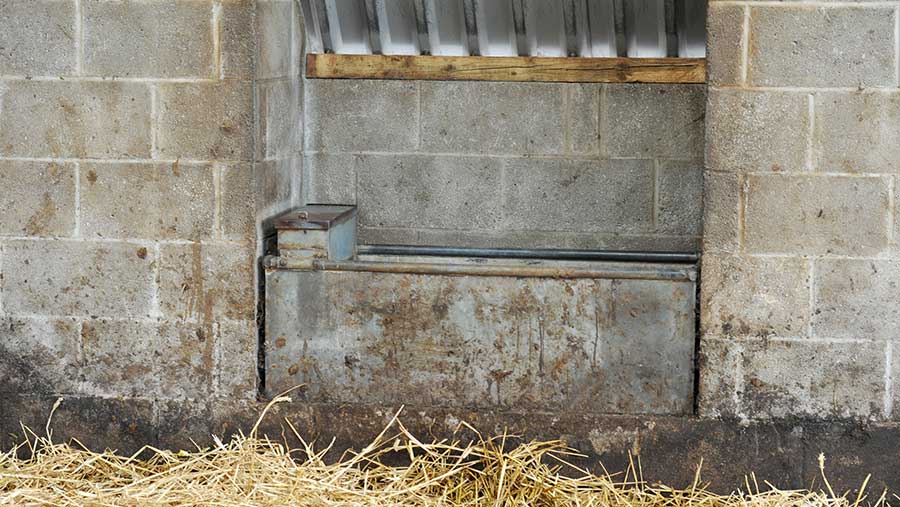 Heifers enter the building at six weeks after being housed in established social groups in the calf accommodation.

They are initially fed straw and concentrates, before moving on to a total mixed ration at six months.

The heifers move into the cubicle side of the shed at bulling age and continue moving through the shed until they are two months off calving.

At this stage, in-calf heifers move to a specialist dry cow/transition area adjacent to the milking herd and are fed a high-energy ration.

What features have you included to aid ventilation?

There is a 200mm gap between the concrete block and ventilated sheets on the external walls to allow air to circulate through the shed without creating any direct draughts.

The central vented ridge on the roof allows air to circulate and escape.

The ventilated sheets and Yorkshire boarding on the walls and gable ends let in additional air without allowing rain in. 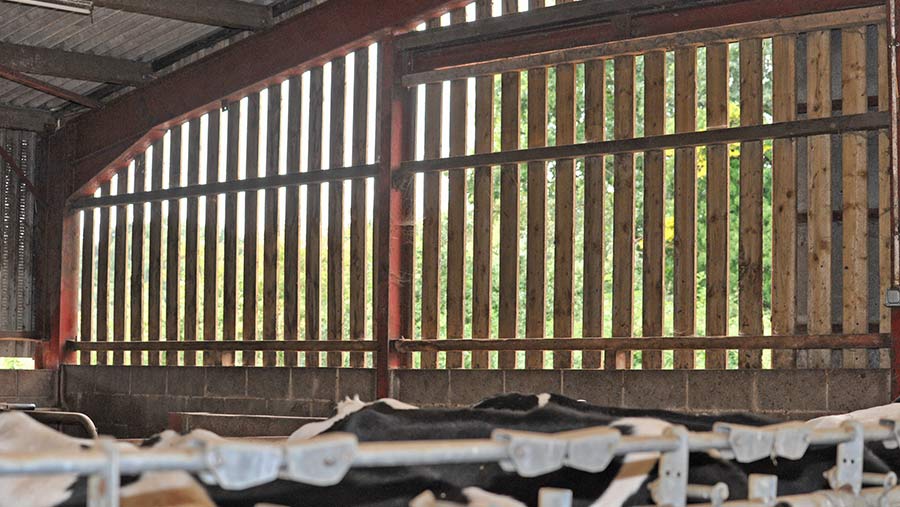 This shed is simply great for animal health. In the three years since it has been in use it has always been full of cattle and we have never had to jab a single animal.

My father has constructed all the sheds on the farm and he converted this one too, with the help of our local builder, Dave Rogers.

The building is completely wildlife-proof which gives me peace of mind considering the endemic TB problem in Wales and Gloucestershire.

Gates are fitted to each end of the central feed passage at night, and the scrape passage doors are only raised three inches off the floor, low enough to prevent any unwanted access from wildlife. 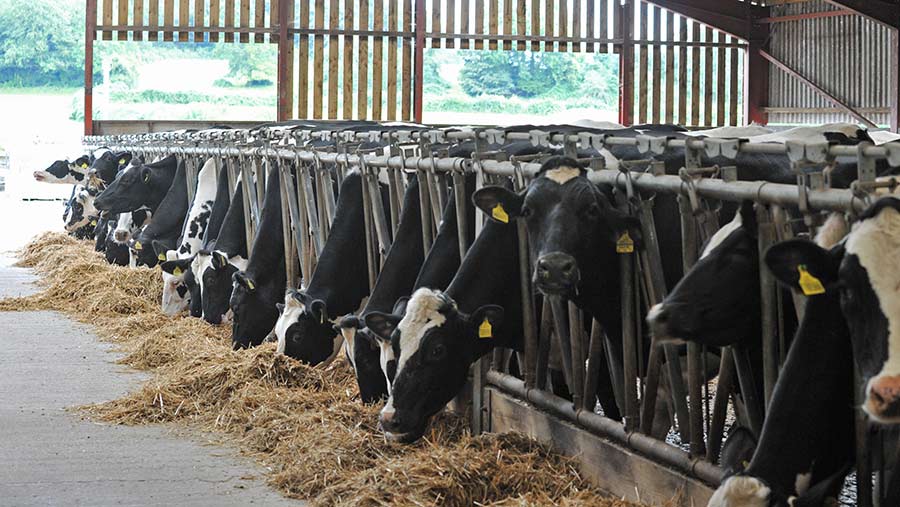 All AI work is managed in-house and we also flush our high genetic animals on a regular basis.

The yokes make cattle handling so easy, whether it is a TB test, a vaccine or an insemination, the process is stress-free for the animals and most importantly, safe for any member of our team.

What would you do differently if you were to do it again?

With an extended footprint, we could create larger social groups of cattle, and it would be great to be able to batch in groups of 40 rather than 20, particularly in the cubicle side.

Larger groups would save time for vaccinating, bedding and cleaning out as there are less gates to open and close.

Housing all our replacement cattle in the same shed has eased management.

We now just open a gate and move them into the next group.

The central feed passage has allowed us to formulate a TMR for the youngstock which has reduced rearing costs and improved labour efficiency.

From calf to fresh calved heifer, we are averaging a calving age of 26 months and our cost of rearing is £1,100 a head including feed, building repayment costs, labour and bedding.

Our target is to achieve the same growth rates, while working to reduce the calving age to 24 months.