The Foster family, Little Houndales Farm, Driffield, East Yorkshire, has invested £150,000 in a multi-purpose beef finishing shed and handling system that is enabling the business to expand.

When son William decided to return to the farm after university, and with daughter Susie studying agriculture at Harper Adams University, third-generation farmers Peter and Mark decided it was time to grow the beef enterprise.

The beef and arable operation currently consists of 55 suckler cows, with all stock finished by 24 months and sold liveweight through Malton market.

However, the new beef shed, which houses weaned calves, was finished in November 2019 and will enable the business to increase cattle numbers organically to 75, with 15 heifer replacements being kept back this year.

Tell us about the shed specifications

It is a single-span Shufflebottom shed measuring 100ft wide by 80ft long and has enough feed space to hold 112 head.

It also has a curved race handling system situated on the outside.

It is a steel-framed structure. The guttering system is incorporated into the shed inside the galvanised eaves and the roof is clad in fibre cement.

The central feed passage measures 4.88m – wide enough for machinery access. The scrape passage is slightly narrower at 3.3m but is still enough room for a forklift.

There is the capacity to have as many as three pens each side of the central feed passageway or it can be made into one large pen.

The animals can be shut back to scrape out and they can easily be run into the handling system.

Stock are housed on concrete which has been grooved in the feeding area for grip with a deep straw bedded area at the back.

Who designed and constructed the building?

The shed was designed by us, and the handling system by Bateman’s and supplied by GJ Taylor.

The main shed structure was on budget but if you count extras like lighting and things, it went slightly over by about £5,000.

The sides are made from concrete panels measuring 2.4m high with Yorkshire boarding on top to provide an air inlet from the sides. They were used instead of Galebreakers to reduce the cost.

Above door openings steel vented sheeting has been used to make the building more aesthetically appealing as the barn is situated next to the main road. 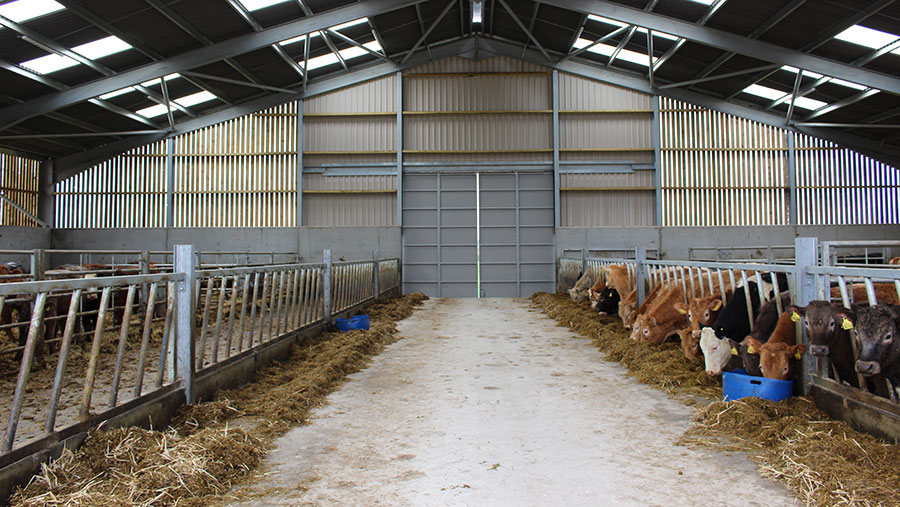 Sliding doors can be used when there is a prevailing wind.

The roof pitch is 15deg and has a protected vented ridge to prevent rain coming in. The plan is to use the shed to store grain during the summer with the capacity to store about 1,000t of grain.

Two sliding doors are situated on one end of the shed to stop the south westerly prevailing wind.

The idea of the shed was to make looking after the cattle a one-man job.

Each pen has three gates so if we need to scrape out, they can be penned back into the bedded area and we can scrape out in five minutes. Having a central feed passage means cows can also be fed quickly and straw can be blown in.

Has any aspect of the design improved animal performance or welfare?

The central feed passage is raised 8in making it easier for the cows to access feed.

The cows are fed a daily ration of silage, and a barley ration three times a day. The silage contains some potatoes and they will try to root through to find these.

However, the sides of the feed passage are slightly sloped (about 5deg) which has made it harder for cattle to sort the ration. 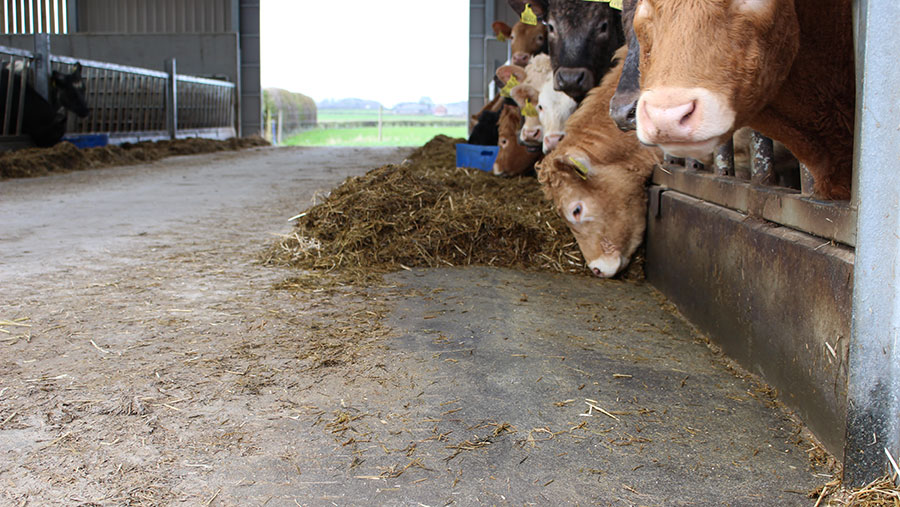 Tip-over troughs in each pen make providing clean water easier. Troughs are tipped out every day.

What are the best bits of the design?

The 16 LED 28w strip lights have made a massive difference to the working environment by helping extend the working hours.

Two LED lights are on a dawn to dusk sensor, so cows have light at night for feeding.

During the day a lot of our work is on the arable side of the business so we can now deal with the cows later on even when it is dark as the LED lights make it feel like it is daylight inside.

Is there anything you would change?

All the pipework for the water troughs is underground on 32mm pipes meaning there is no chance of water freezing.

The only external pipework is where the water pipe comes out of the ground to feed the trough and this has been protected with galvanised steel to prevent any damage from cows and machinery.

Each individual trough can be turned off, however, there is no isolator tap for the whole shed.

This would have been useful given we are hoping to use the shed as a temporary grain store in the summer.

Tell us about the handling system

There are three open-sided pens in the race which are useful to separate off different age groups. All the gates are 1.8m high. 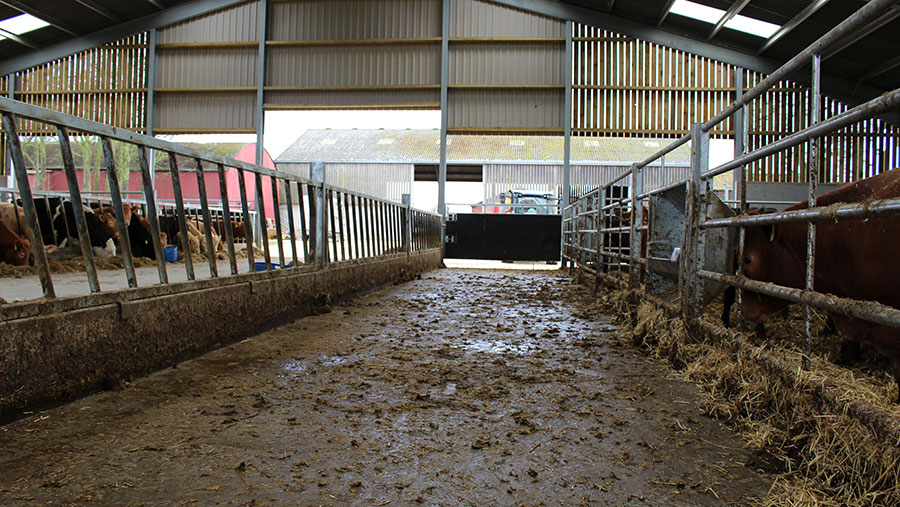 Multiple gates in each pen allow cows to be shut back and the passage to be easily scraped out.

A forcing circle with solid sides is used to move animals into the last bit of the race towards the crush. There are two non-returns in the race.

The 3m manual squeeze crush contains a chin scoop – which is great for tagging – and has various access points making it easy for us to access all parts of the cow and it’s small enough for calves. 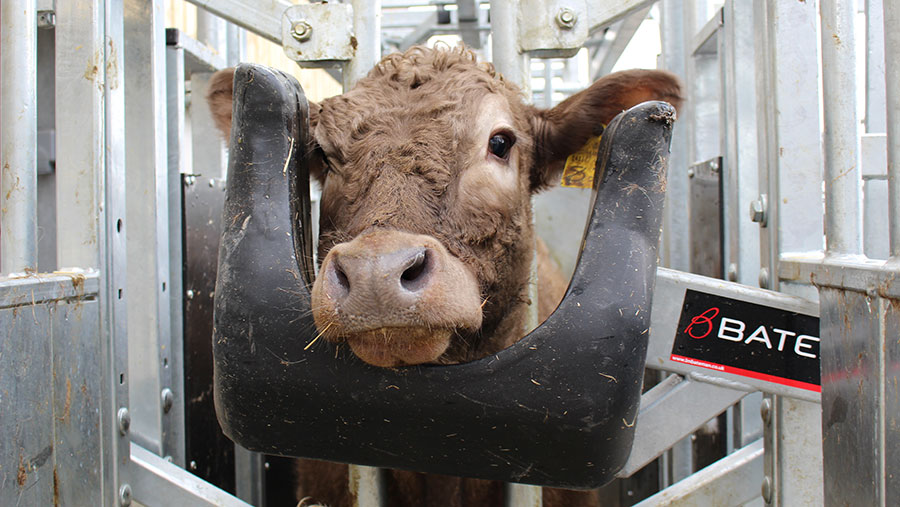 The chin scoops aids access to the head and neck.

We invested in a Tru Test weigh head and EID stick reader as EID.

The flooring in the handling system is concrete with a brushed finish to provide some grip and prevent slipping.

What have been the biggest benefits?

Since housing the finishing stock in the shed there have been no cases of pneumonia and handling is now a one-man job.