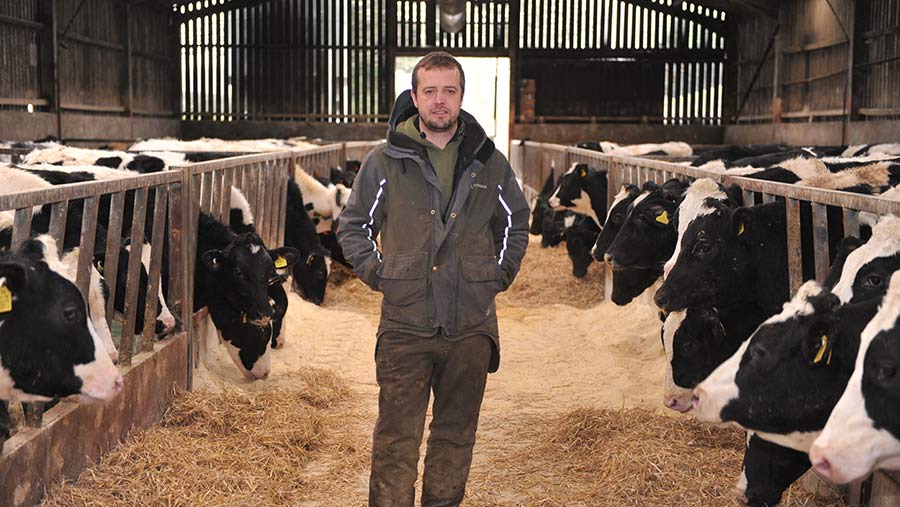 Stuart Hammond in the shed

A mid-Wales beef finisher is capturing an additional 0.4kg daily liveweight gain (DLWG) a head since making improvements to housing.

The slatted shed was built before the Hammond family took on the tenancy at Gaufron Farm, Howey, in Powys.

But by investing in new ventilation, flooring and water and feed troughs they have created accommodation that matches the performance of modern housing without the expense of new infrastructure.

The combination of changes has increased average growth rates a head from 1.1kg/day to 1.5kg/day for the 290 days the cattle are on the farm.

He says: “Margins in this job are tight, so we have to save as much as we can and get as much performance as possible.”

Debbie James visited Gaufron Farm where Mr Hammond gave her a guided tour of the shed.

See also: What’s in your shed? Inside a state-of-the-art beef shed 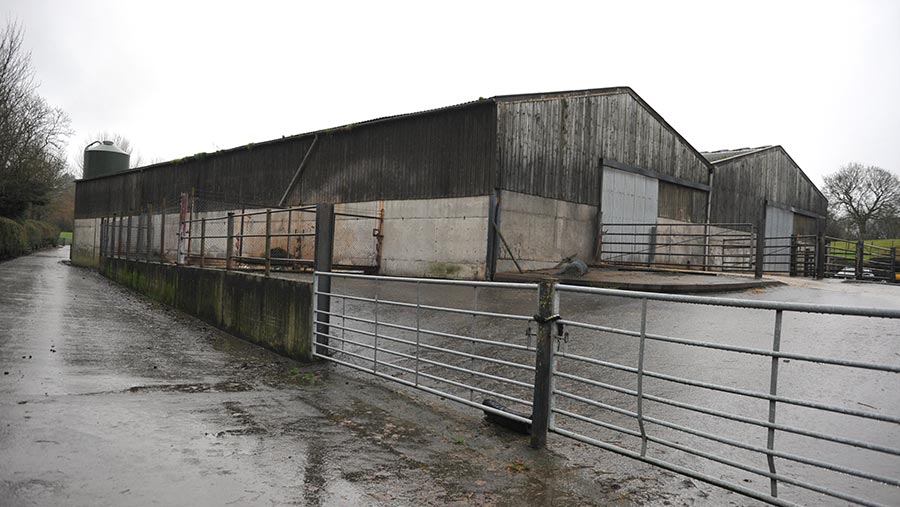 What are the shed’s fundamentals?

The 12-bay, slatted shed can accommodate 240 cattle from 16 weeks to finishing.

Slurry drops into underground tanks which are pumped out with an umbilical system twice a year.

The shed was here when we took on the tenancy 26 years ago but there is a lot we have done to update the original infrastructure. 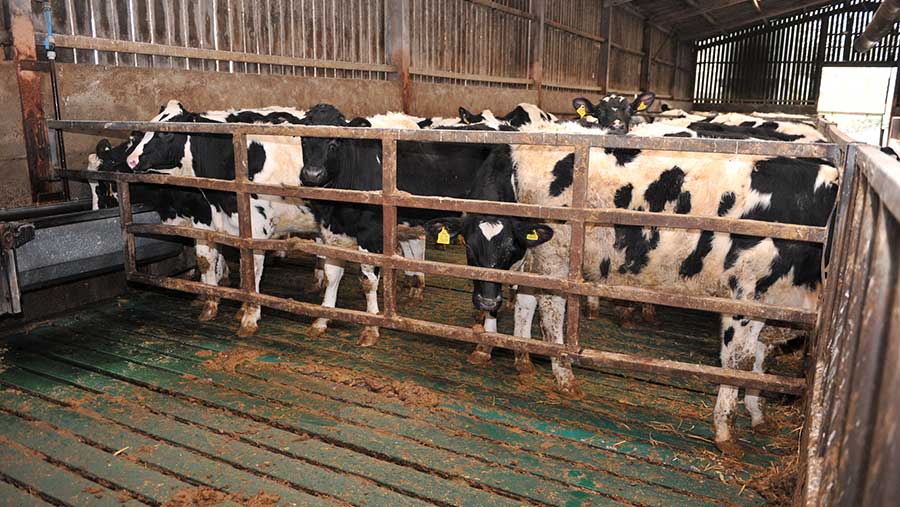 What is your priciest investment?

In 2017, with help from our landlord, we fitted mats on top of the slats at a cost of £33,000. It has made a huge difference to animal behaviour.

The floor was very polished in places where the slats had become worn and the cattle hated it. They would stand still for a month after they arrived from straw bedded housing. We were also getting a fair bit of digital dermatitis and other joint issues.

Fitting the mats has been one of the best investment we have made. The cattle are more comfortable; they will quite happily play in the pens now, whereas before they were almost too frightened to stand up.

From day one, growth rates increased by 200g a day.

The mats are slightly curved so the urine runs off them and this keeps the cattle dry.

We clip the cattle for slaughter in the winter because there is more moisture in the air, but in the summer they are as clean as a whistle. 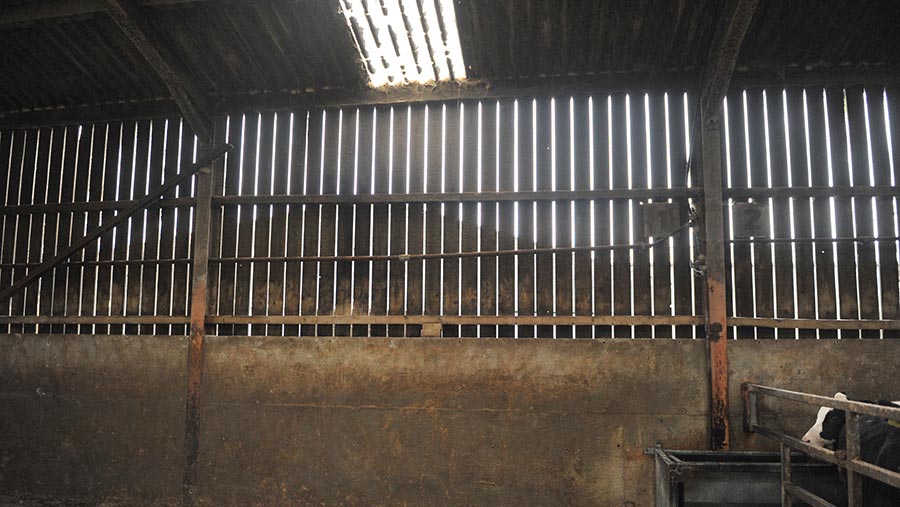 We removed a ridge cap from every other bay – before we did this the air was stale and we had issues with pneumonia and this affected performance and profitability.

Making that small change to the roof has allowed the stale air to escape quickly.

But we felt there was more we could do to improve ventilation, so two years ago, on the back of advice from Dunbia, we installed two fans with wind tunnels running down the centre of each half of the shed.

The holes in the tunnel force fresh air down into the cattle pens. When you stand in the pens you can feel the air moving. The aim is to change the air in the shed every five minutes.

Our antibiotic usage is down to 2.3mg/PCU and is continuing to drop because cattle are healthy when they arrive and we are managing them well. 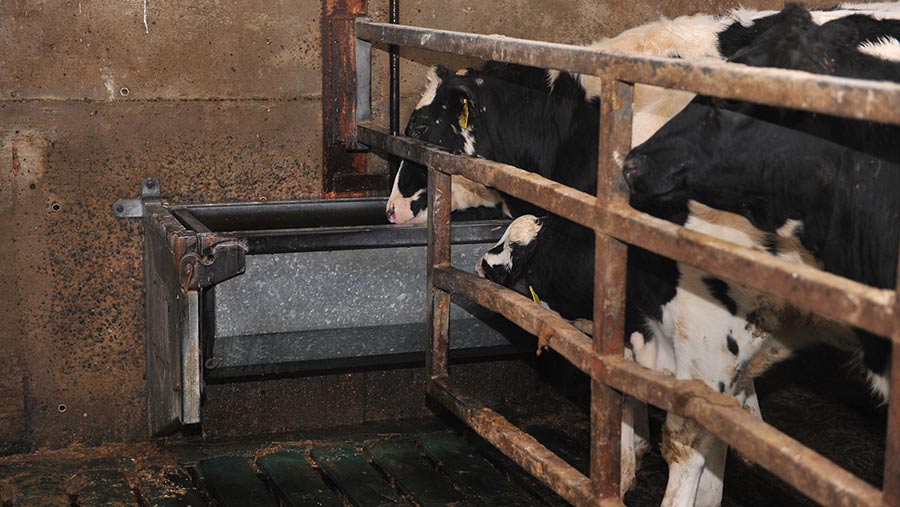 Three years ago we replaced our static water troughs with wall-mounted tipping troughs. We installed six at £280 each.

Because the cattle always have a bit of feed on their mouths when they drink it ends up at the bottom of the trough and with the static models it was a lot of work to clean this out.

The tipping troughs rotate 180 degrees and dump the water into the slats which means they are really simple to clean; we clean them with a hand brush once a week, one every day. 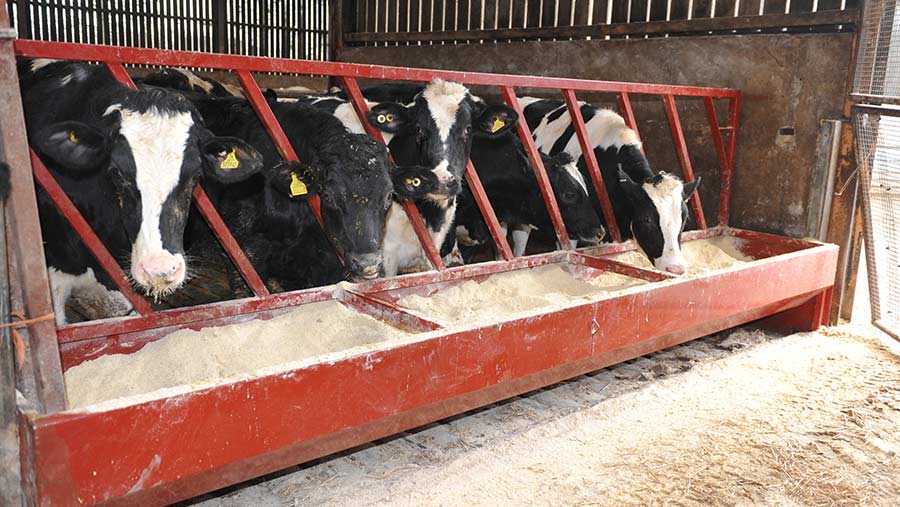 What is your best buy?

In the past few weeks we have installed a few feed troughs in the feed passage and are in the process of installing these for every pen so that we don’t have to push up the feed.

I’ve worked out that it had been costing us £3,500 a year to push up the feed at either end of the day.

The troughs are made by a local blacksmith, from 3mm steel sheet, and cost us £250 each.

I think they may allow us to get away with feeding every other day. 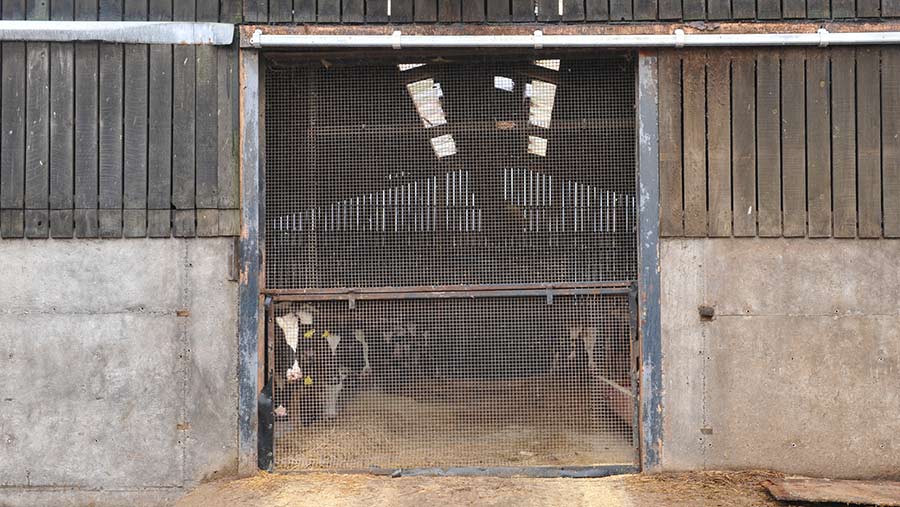 What has been the simplest improvement?

We were having issues with starlings getting into the shed. They were eating around 15% of the starch when we were feeding grain in the ration and we were concerned about the disease risk.

I made doors to go at either end of the shed, one-inch mesh attached to a metal box frame.

We rarely get starlings in the shed now and the doors are flush with the floor so they keep badgers out too.

They are hinged in the middle so when they are opened the bottom half folds up against the wall.

About the finishing system

The Hammonds finish cattle for the Dunbia integrated beef programme. Calves are sourced from dairy herds aligned to the programme and arrive at 16 weeks.

They are reared at their home farm, Newmead Farm, for six weeks and then transferred to Gaufron aged 22 weeks.

Calves are vaccinated for pneumonia on their source farms.

“The beauty of the integrated system is that we know the history of every calf,” adds Mr Hammond.

When calves arrive at Newmead they are vaccinated for clostridia. They received the same ration they had on the previous farm so that they don’t get a growth check from nutritional stress on top of the stress of the move.

This also prevents the calves’ immunity being compromised.

Animals weighing up to 400kg liveweight receive 2.4% of their bodyweight as dry matter daily.

The grower rations comprises 700kg ground maize, 200kg distillers, 50kg soya and 45kg of Inzar premix per tonne. This is fed alongside ad-lib with straw, which they get from arrival up to 400kg liveweight.

Once cattle reach 400kg liveweight DM intakes reduce to 2.04% of bodyweight. Ground maize per tonne is reduced to 674kg and distillers to 250kg and 13kg of protected fat is added to the ration.

Target slaughter weight is 600kg liveweight, when cattle are 13-14 months.