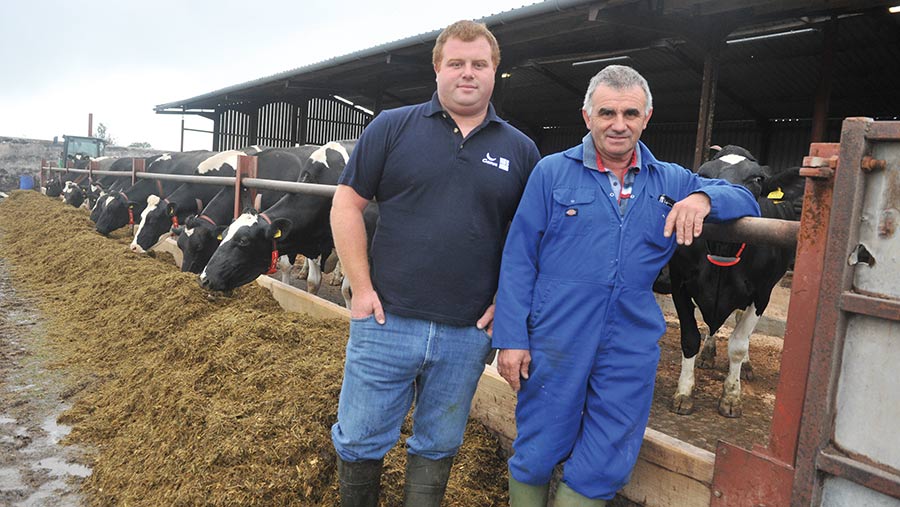 A Welsh farm is milking cows in a robot powered by a standalone renewable energy system after it was forced to relocate to a remote site when its rented dairy unit was converted to housing.

Father and son David and Tomos Adams were milking in a seven-unit swingover parlour on a tenanted farm near Cowbridge when the farmyard was earmarked for development.

Moving the milking facilities to another location on the same estate created a challenge, as the site had no grid-connected power, but it also presented an opportunity to switch to a fully housed robot milking system.

“I didn’t want to be tied to milking every day for the rest of my life,’’ says Tomos, who joined the business after graduating in animal science with a focus on nutrition at Nottingham University. 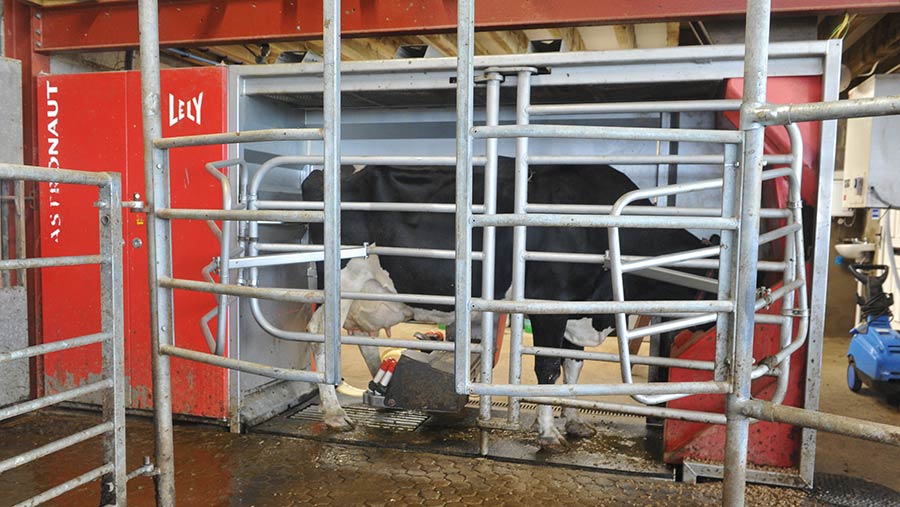 But with no electricity supply at the site and a quote of £80,000 to connect it to the grid, the Adamses had to consider other options.

For less than half the investment needed to connect to the mains, they installed a solar array with battery storage to run a single robot. It is believed to be the only off-grid milking robot in the UK.

“It is a more sustainable way of producing milk – it’s the way forward,’’ says Tomos.

We visited the family at Llanfrynach Farm Cowbridge, where Tomos gave us a tour of the facilities.

How much did the shed cost to convert?

It cost us £200,000. The sheds were previously used for housing of breeding heifers and store cattle.

My dad is the second generation on a three-generation tenancy and I will be the third, so the investment will have done its job when the tenancy comes to an end. 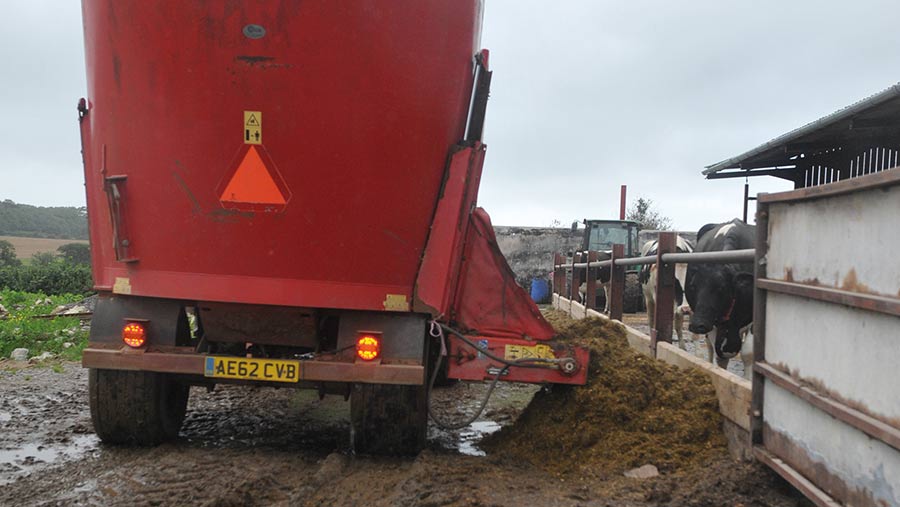 What system were you running before?

We were milking 80 Friesian Holsteins, calving year-round and producing an average annual milk yield of 6,500 litres, but we have now reduced numbers to 50.

We surrendered 12ha (30 acres) of the land due to our landlord getting planning permission for housing and office development. We had three years to relocate the milking facilities to another part of the estate. 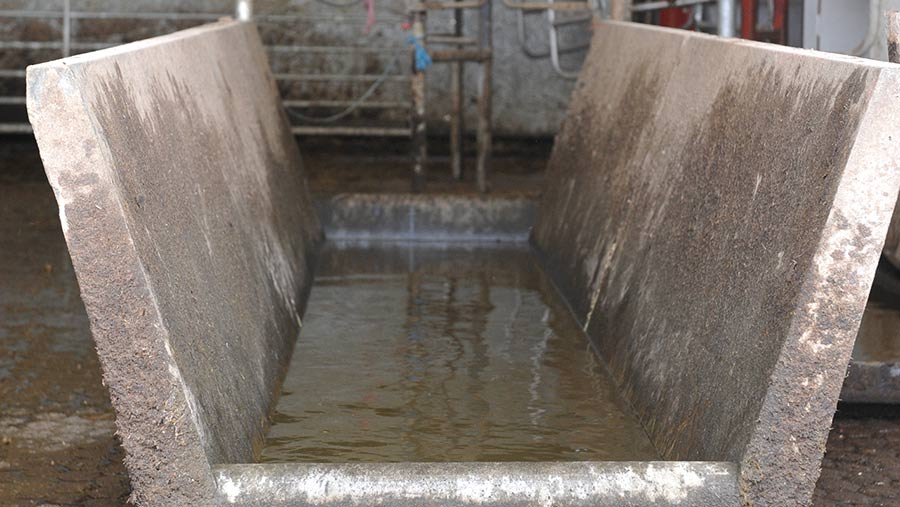 Who designed the conversion?

I designed it and Lely ran it through design software with all the measurements and told us it would work.

The only thing that was changed was the aspect – it now gives cows more protection from the prevailing weather, but it could make it more difficult to extend the building. 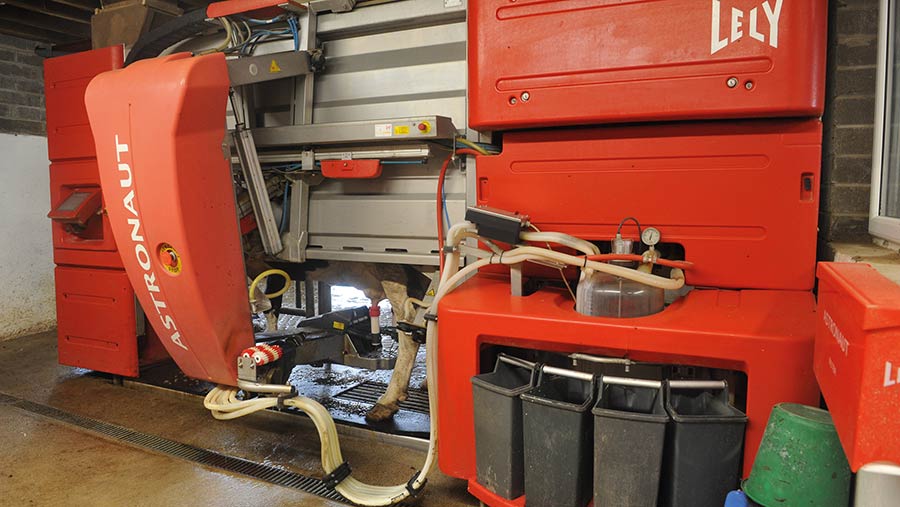 What are the conversion specifications?

The build is 36x9m with 19 Euro Dutch compact cubicles with sand curbs against one wall and a 3.6m scraping passage.

The shed is open on one side, with an overhang covering 48 head-to-head cubicles.

On the other side of the overhang, in the open air, there is a 4.8m scraping passage. 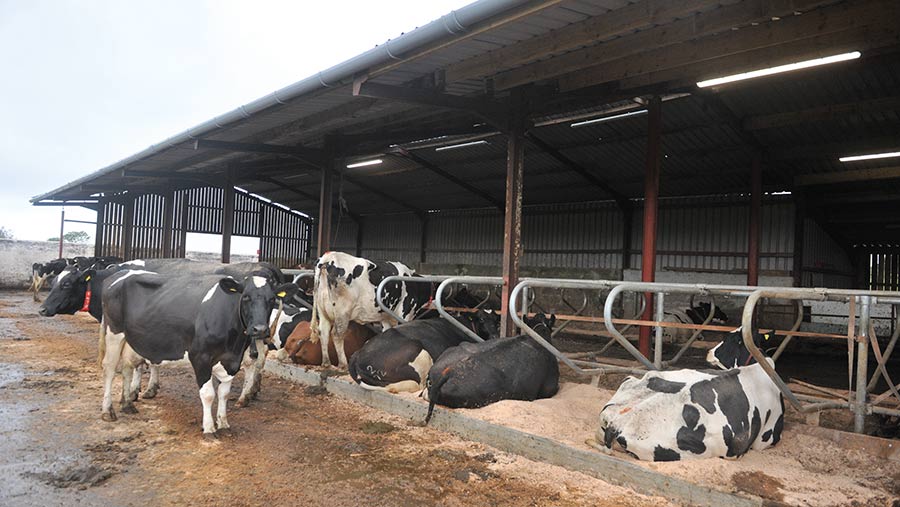 My cousin, Paul Adams, of Howell Adams Engineering, built the shed and installed the steelwork.

It was a five-bay shed that has been extended to eight bays.  We removed all the existing concrete with the help of Rhydian Llewellyn of LT Groundworks.

What is your favourite feature of the build?

The slurry channel and reception pits that we built ourselves when lockdown interrupted the work.

It makes life a lot easier, because we used to collect slurry in a tanker and spread it twice a day.

Our budget didn’t stretch to permanent slurry storage at this stage, so we have a slurry bag to give us 454,609 litres of storage.

We have also invested in a 11,300-litre tanker to help with the slurry management. 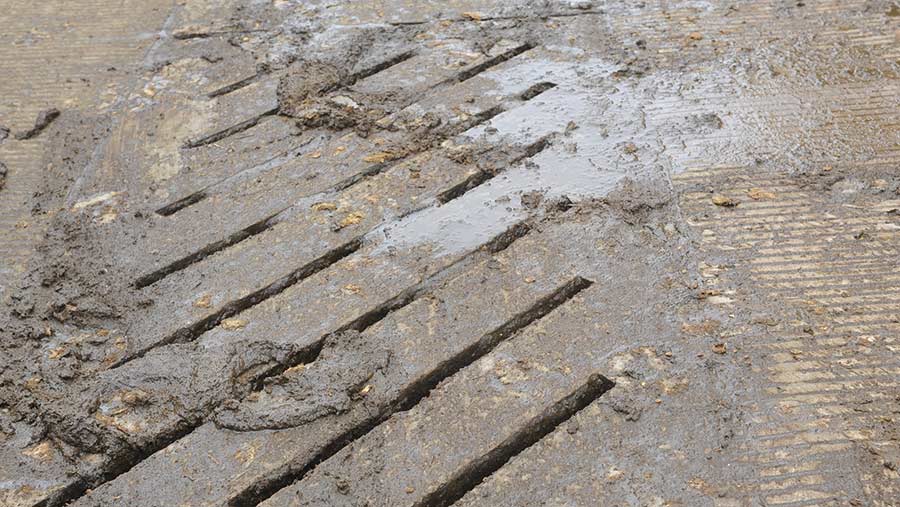 What was the best buy?

The renewable energy system. On a sunny day we can generate 60kW of energy to power an A3 Lely robot which we bought second-hand.

We have 45kW of battery storage and a back-up generator.

We sought advice from Lely about running the robot off-grid and they advised us that it should work, but it was a first for them.

The control units feeding the energy from the solar panels to the robot give a stable energy supply without any surges.

When we were milking in the swingover parlour, our annual electricity cost was about £12,000, but even though a robot is more power-hungry, our energy costs are now half that because we use 1,000 litres of diesel each month to power the generator and that costs about £500. 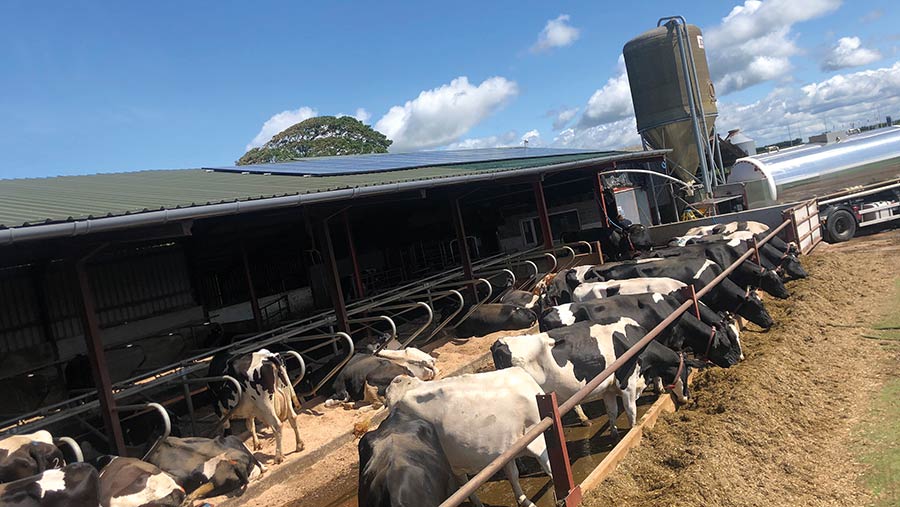 Three lithium ion batteries, each with 12.8kW storage, which is sufficient to run the robot for 12 hours.

Even with these we do rely heavily on the generator, so we are considering buying a fourth battery because we have room for another and 30 more solar panels.

The robot uses a lot of power, so the generator is running for an average of six hours in every 24 and has to be topped up with diesel every day. 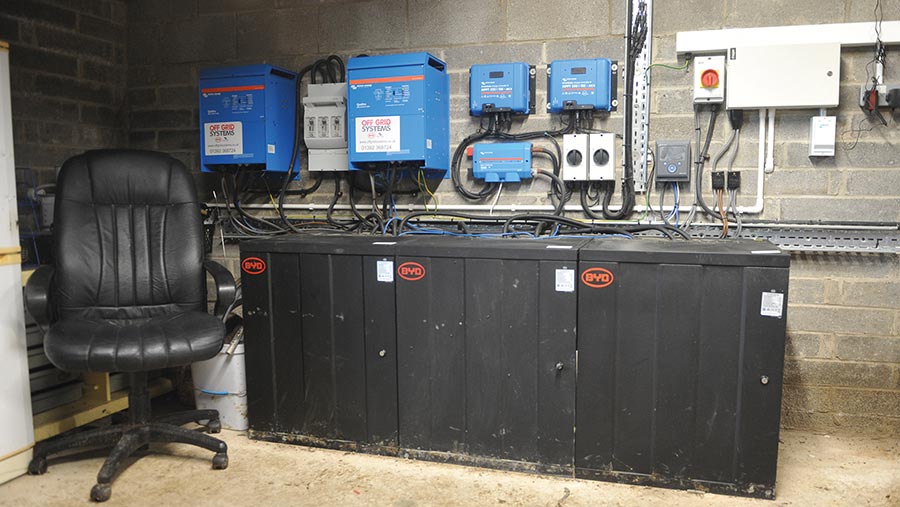 Did you come up against any problems?

We didn’t have a mobile phone signal or telephone landline here and you can’t run a robot properly without these.

We solved this with a 5G receiver on the roof of the shed, paid for by a Welsh government grant of £800.

What do you wish you had differently?

Made the shed bigger. If we’d had more time, we would also have put up a second shed alongside the existing one to cover the feed passage to keep everything drier.

What we will probably do now is erect steels to come off the edge of the overhang and fix Yorkshire boarding across the front. 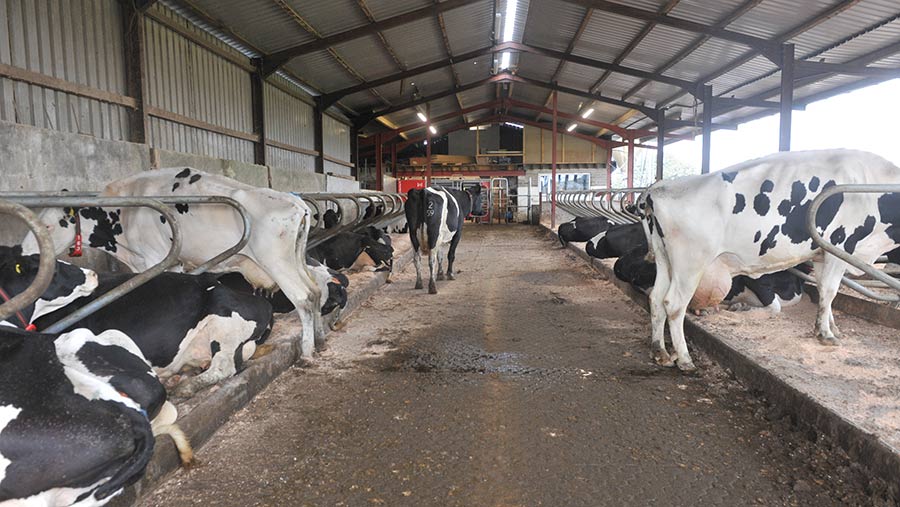 How long did it take to train the cows?

They adapted very well to robot milking. The first two days were hard work, but it gradually got easier and by the end of week three they were pretty much visiting the robot on their own.

What are the benefits of the shed conversion and robot milking?

One of the biggest improvements is udder health. We were averaging seven to eight cases of mastitis a month, but it is now never more than two. This is probably because cows are being milked more often, but also because each quarter is milked individually and there is no overmilking.

There is improved comfort and cleanliness in the cubicles because we have sawdust beds and the cows are definitely happier.

With robot milking we are able to give the cows more attention; time we would have spent milking can now be used to keep on top of lameness and cow health.

There were always two of us at the old site – one milking and the other scraping – but it is generally now only me.

We are also feeding less concentrates – we were feeding 0.5kg per litre of milk in the swingover parlour, but now only feed 0.25kg/litre.

My dad was sceptical about robot milking, but six months on he says we should have done it 20 years ago.