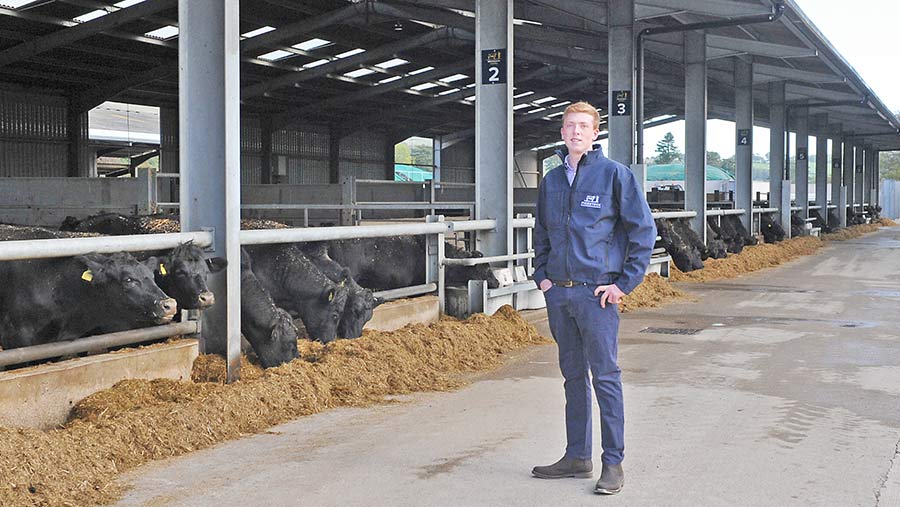 Abattoir and meat processing company Pickstock has invested in rearing, handling and finishing facilities at Brongain Farm, Llanfechain, where it will be finishing 1,000 dairy-bred beef calves annually.

Pickstock already procures livestock directly from farms and processes 100,000 cattle a year and exports to more than 25 countries.

But the new facility, which has taken 12 months to build, will now see the company sourcing calves directly from 15 farms within a 40-mile radius of the site and taking them through to finishing.

The company says the facility has been established to protect its future supply chain, creating a profitable model of production for all beef producers and to deliver a consistent carcass.

Building design, ventilation and automatic calf feeders have been carefully selected with the aim of achieving high health status and reducing the need for antibiotics.

The company declined to reveal the level of investment or the projected average rearing cost a calf through to finishing, but says the facility will act as a hub for live trials and knowledge transfer between farmers and its partners in the beef supply chain.

We took a tour around the site. 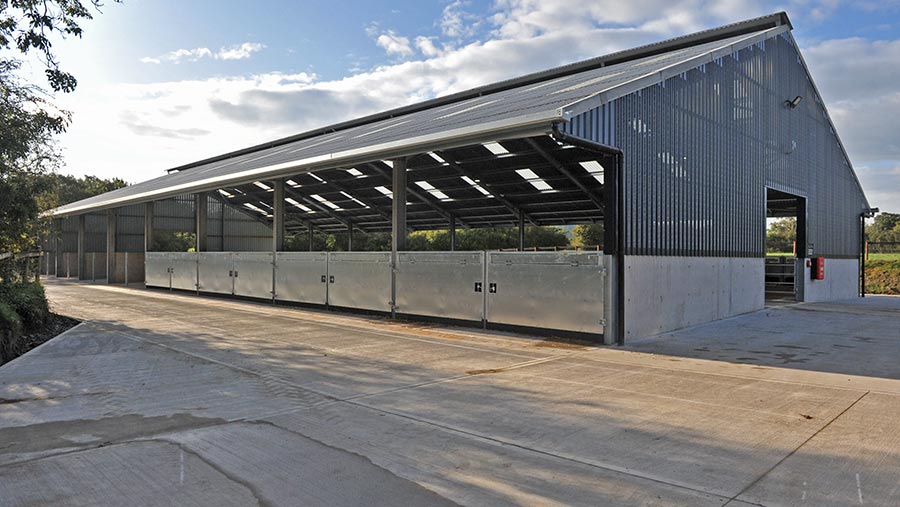 Much of the design was done by Rowan Pickstock, the third generation of the Pickstock family to work in the business.

He is responsible for the day-to-day running of the unit. 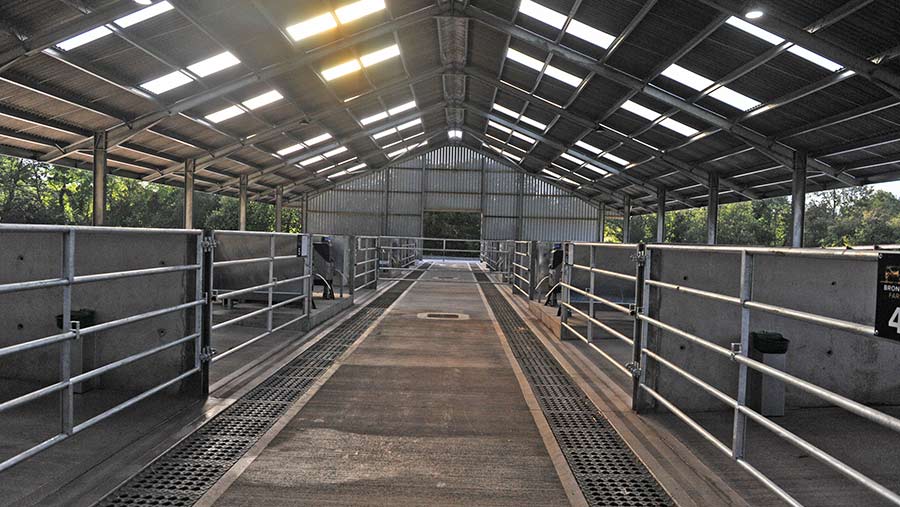 Ventilation is being monitored with a view to possibly fitting a wind tunnel retrospectively.

Automatic gale breakers are to be added on the west-facing side to protect calves from draughts.

The shed is divided into 16 pens – eight on each side – with 15 calves housed in each; this provides 3.25sq m of floor space a calf.

The pen floors are laid on a gradient to allow moisture run-off into two drains that run the entire length of the shed’s central passageway; the liquid is captured in four underground effluent tanks. 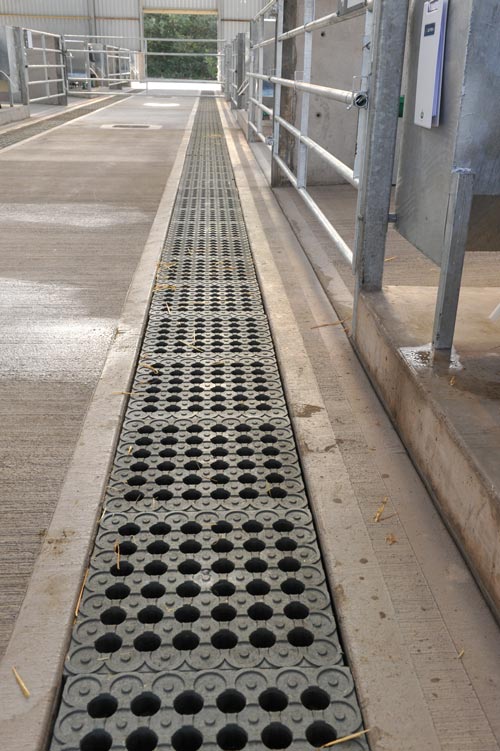 A low concrete barrier runs along the front of each pen to hold the straw bedding in place.

Steel doors are fitted at the rear of each pen to allow access by machinery for managing the straw beds.

The straw is chopped away from the shed to protect calves from dust. 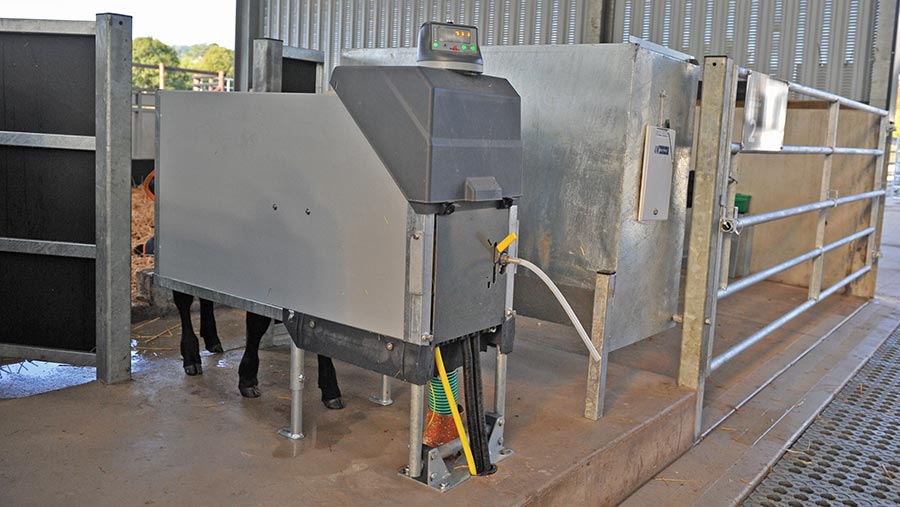 Each pen has a feeding station supplied with calf milk replacer mixed in a Holm and Laue computerised calf feeder.

There are four of these machines each supplying four feeding stations.

Teats and tubing are rinsed automatically with a jet wash after every calf visit.

The feeding stations are positioned on a floor with a 1:20 gradient as calves tend to urinate after feeding and the sharp slope allows the liquid to drain easily into the underground effluent tanks. 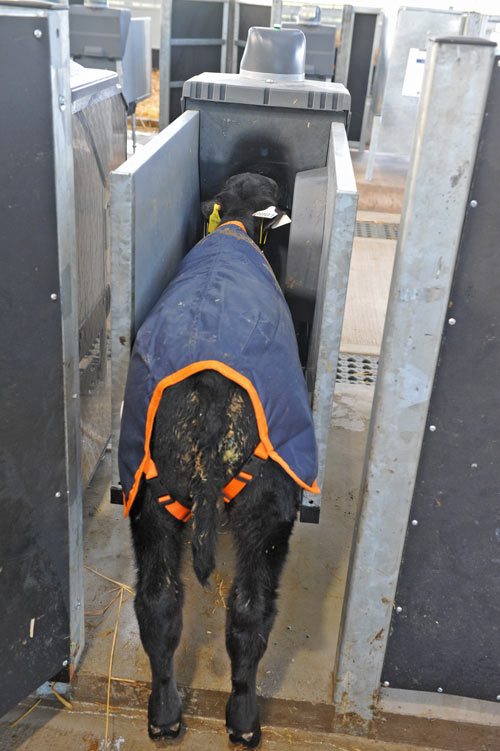 The automatic feeders are calibrated to assume calves are 14 days old on arrival and have an automatic cut-off for weaning at 70 days; after the first two days on three litres of milk, feed intakes are gradually increased, up to a maximum of 8.5 litres a calf a day at day 63 and reducing thereafter.

The milk replacer is 15% protein, but in cooler conditions a 17% protein product is fed.

Each calf pen has a station for dispensing starter concentrate nuts ad lib; the aim is to have calves eating 2kg at weaning.

The feeders may be calibrated to dispense 30kg a day to ensure the group is achieving that target.

Calves are weaned on to pellets and straw. 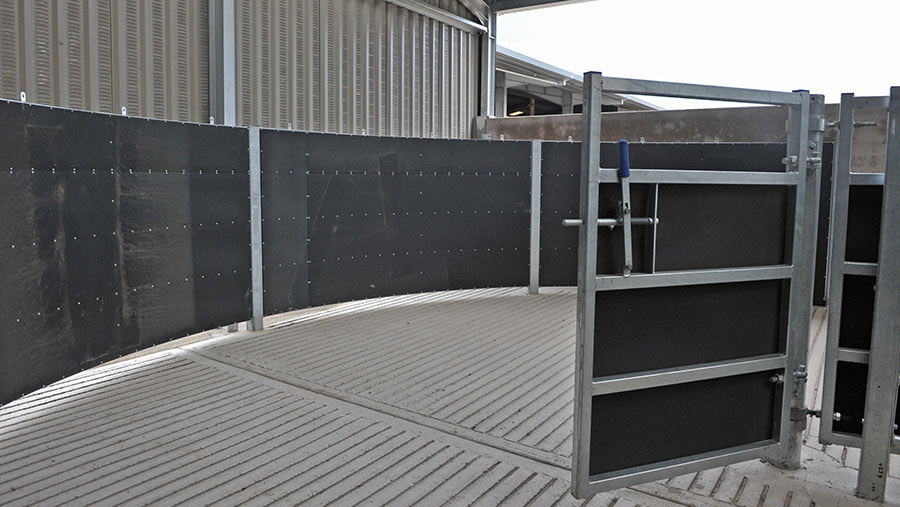 Calves are EID-tagged when they arrive on farm to capture data for managing the individual performance of each animal.

The animal’s weight history is tracked to identify good and bad performers and to inform management decisions. 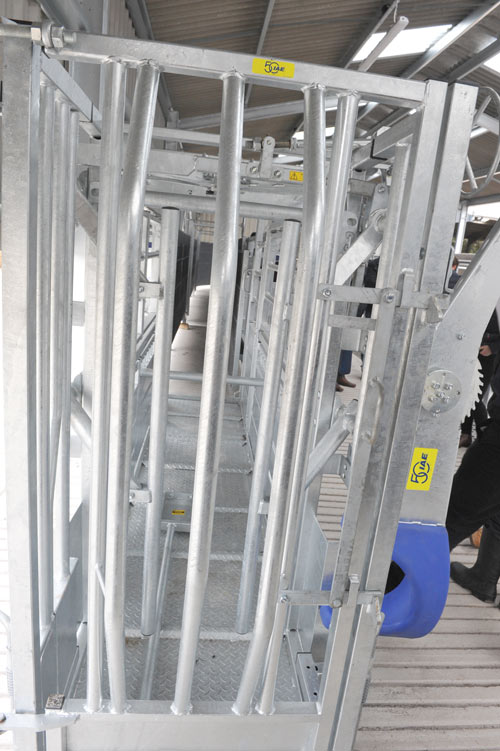 Daily liveweight gains average 0.85kg from arrival on farm to weaning, 1kg/day from weaning to the end of the growing period and 1.4kg/day during the 100-day finishing period. 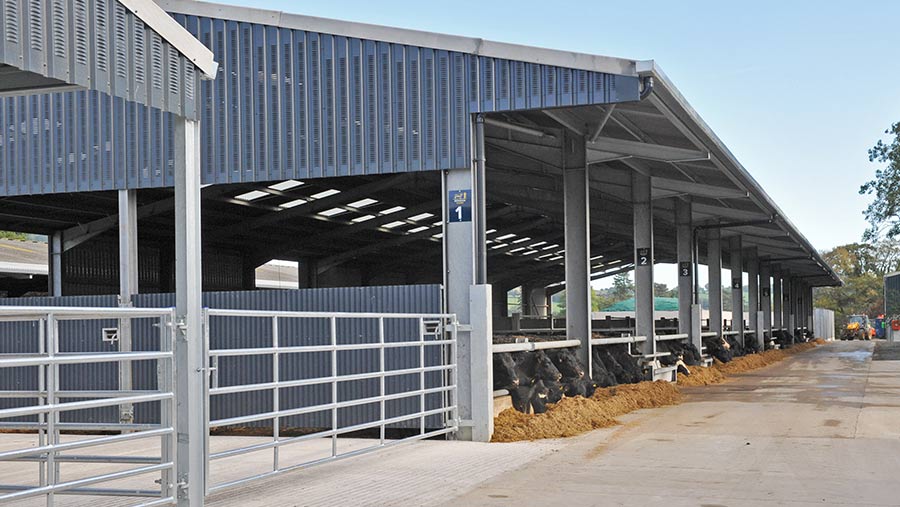 Growing and finishing animals are housed in a steel portal frame building, 79m long with 13 bays; there are vented sheets at the gable ends.

The shed incorporates six pens and a holding pen, with each straw-bedded pen housing 30 cattle.

Cattle are fed a total mixed ration twice a day with a Keenan diet feeder.

The growing ration is 3kg of 16% protein blend, 16kg of grass silage and 0.5kg straw up to 500kg; during the grazing months, cattle are grass-fed in a rotational grazing system.

No maize is fed because the meat is supplied into the food service sector, where a yellow tinge to the fat layer is not desirable. 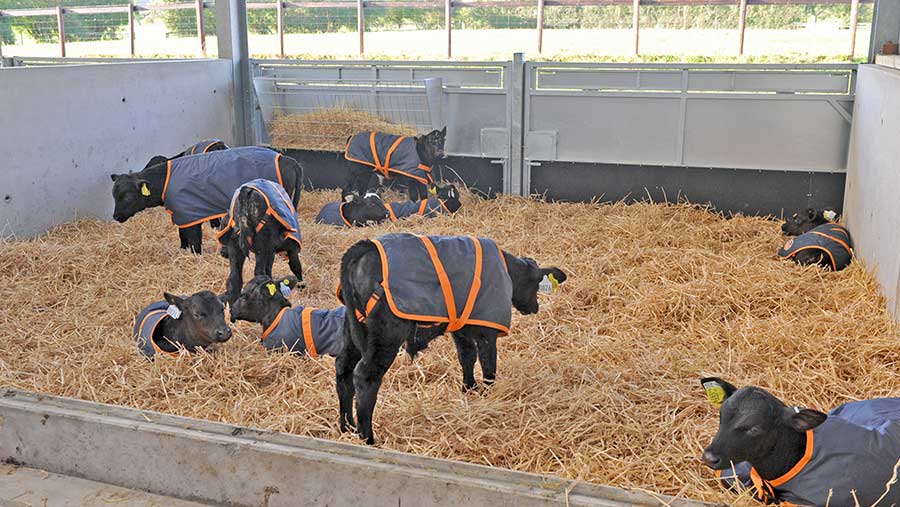