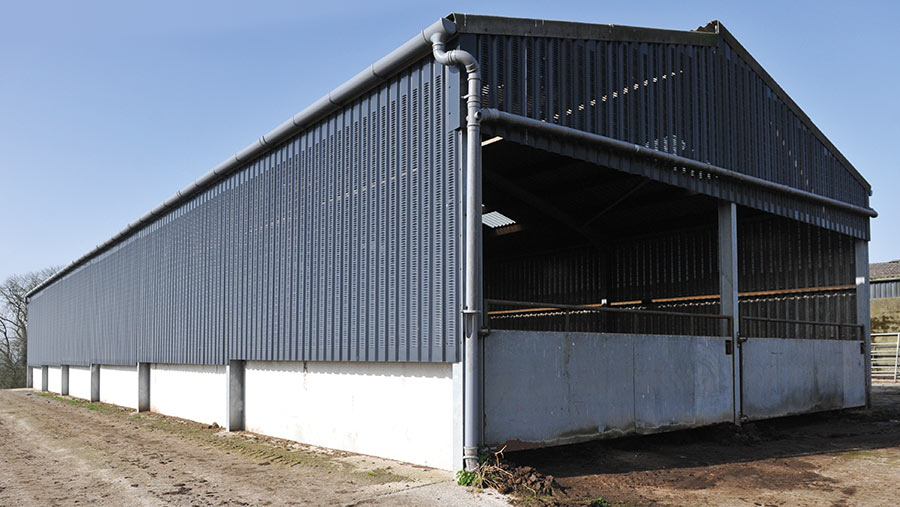 A beef fattening building designed to aid natural ventilation is accelerating the finishing period at a Carmarthenshire livestock farm.

Beef production at Rest Farm near Llanboidy is focused on maximising output from grazed grass, but sheds are a “necessary evil” due to an annual rainfall average of 1.35m and heavy clay soils, says farmer Aled Evans.

The bottleneck in the 650-head system had been the fattening period – with no purpose-built accommodation for the finishing phase, cattle were slow to finish.

A new shed has now boosted performance at that stage of production. What’s in Your Livestock Shed heads over to take a look.

It is not only enabling consistency of throughput, but the average daily liveweight gain (dlwg) in the final 75 days cattle are housed is 2kg, which has sped up finishing.

“It means that instead of having 20 cattle finishing at the same time at 20-24 months, we can now have 60, and that keeps down our cost of production,” says Mr Evans, who farms with his brother, Iwan.

How did you design the shed?

Iwan and I visited farms with finishing sheds, and we came up with our own design based on some of those ideas.

We then had input from our vet, Sam Fenemore at Prostock Vets, and buildings consultant Jamie Robertson. I would definitely recommend that farmers get their vet involved in building design.

Our initial design was for a much more open shed, but because wind can be a problem here the decision was made to enclose three sides to protect the cattle while reducing the risk of moisture building up. 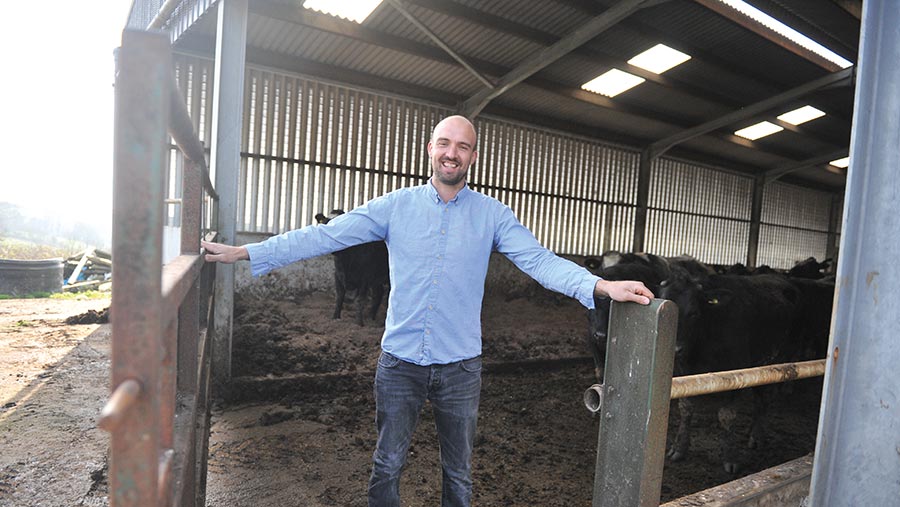 There is an overhang to keep rainwater off the feed, and a 0.1m outlet area in the centre of the shed down the full length of the building to create a stack effect without letting in rain or a draught.

We set our budget once we had finalised the design, so we knew what it would cost.

The shed has six bays and sufficient capacity to house 60 finishing cattle on sawdust bedding. 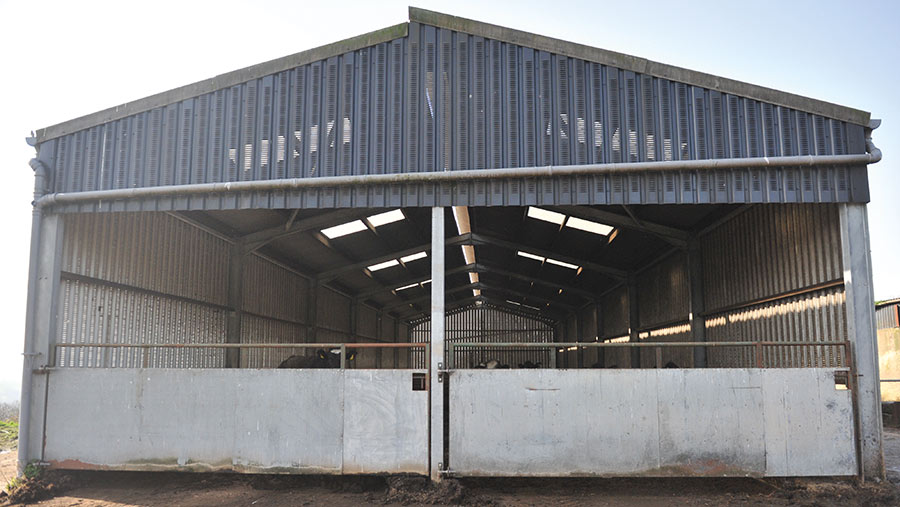 Open side of the shed © Debbie James

There is a feed trough down one side, which makes feeding with a mixer wagon a straightforward job that takes 10-15 minutes a day. 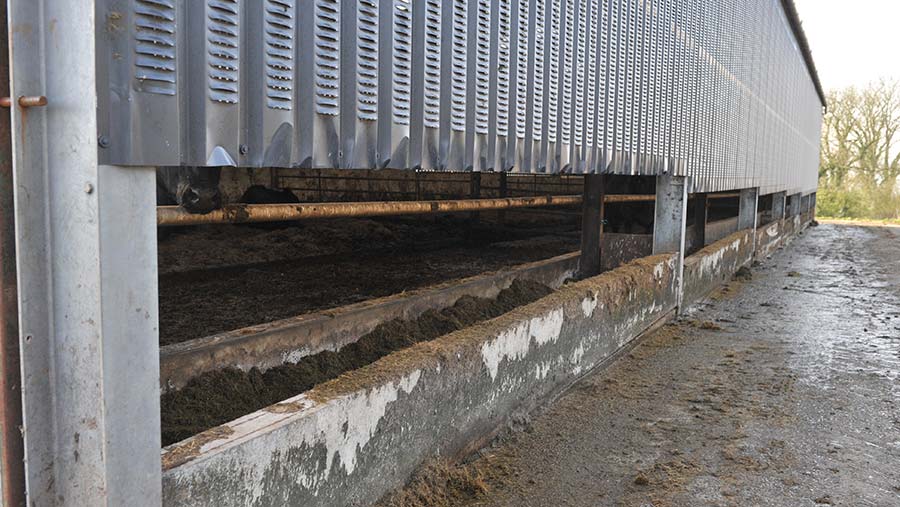 We used a local contractor, Gavin Gibbard, for the construction and the fabrication was done by Hefin Jones.

The ventilation outlet in the middle of the shed. 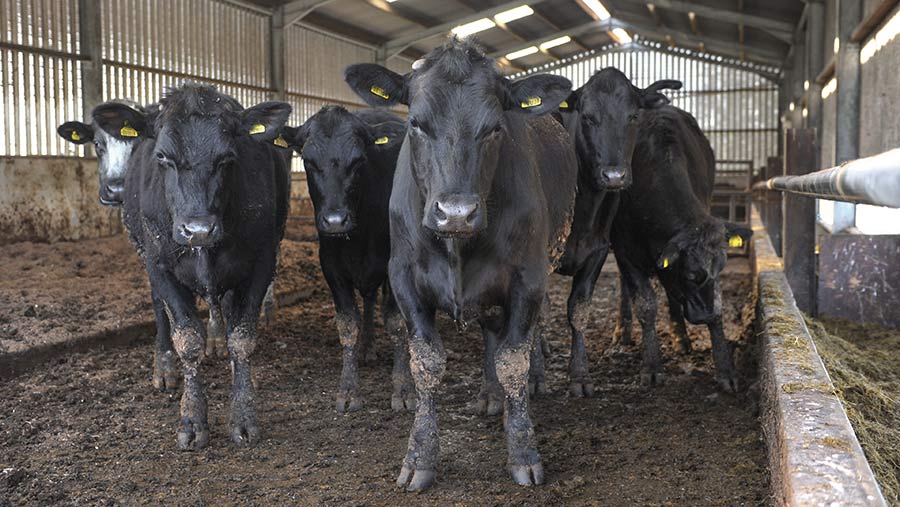 It keeps out the wind and rain but allows for the desired ventilation, aiding cattle performance and welfare.

How has the shed improved performance?

It is allowing us to generate enough winter sales and sufficient profit to pay a good member of staff to give us the lifestyle we want.

Llifon Davies joined us in the business 13 months ago on a profit share arrangement, and we have more recently established a cattle growing agreement with him.

We place 110 cattle at 100kg with Llifon and they are grown under a target DLWG contract to return to the farm at 500kg. Bonuses are paid for above-target performance.

Mr Davies is paid monthly for work as part of the core business and he also gets a profit share from the store lamb enterprise.

To reward him for business growth, he gets a profit share from all additional animals/land taken on.

We used to get a bit of a backlog of cattle that were slower to finish, but we now know when they will be ready to sell and it gives us more control.

At the finishing stage, our aim is to have the cattle on-site for as short a time as possible.

A hydraulic squeeze crush. It has saved a lot of blood, sweat and tears. 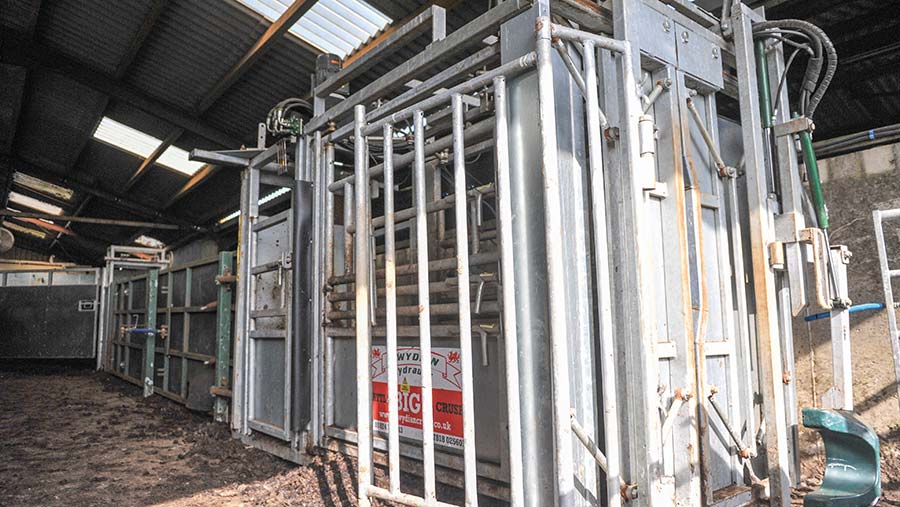 We clip cattle before they are sold, so this piece of kit makes it safer.

Cattle are weighed every four weeks or every three weeks in the finishing period. It is now a one-man job in one afternoon, whereas before it took two of us.

We would probably have made it bigger by adding a couple more bays, because we are growing cattle numbers year-on-year.

We might also have put in a slatted floor because of the new nitrate vulnerable zone regulations. The dung is scraped into a slatted channel into a slurry pit.

Because the shed is enclosed, the cattle are using less energy to keep warm and are using it for growth and to lay down fat instead.

We know the cattle will gain 2kg/day when they come into the shed – anything from 1.5kg is cost-effective for us.

If we weigh them and feel they are not far off finishing, we can guesstimate they will be ready in two weeks so we can book them in for slaughter. It gives us more control.

The brothers buy dairy-beef calves and rear them on skimmed milk powder until weaning at 80kg. These are sourced from four dairy farms.

“We have a good working relationship with our suppliers, who have excellent calf management protocols, and we have an input into which bulls are used,’’ explains Mr Evans.

Cattle graze from the end of February to the end of November, after which they are housed, mainly in cubicles. The housed ration consists of grass silage, red clover silage and rolled barley, with some bread included in the diet of the continental-type cattle.