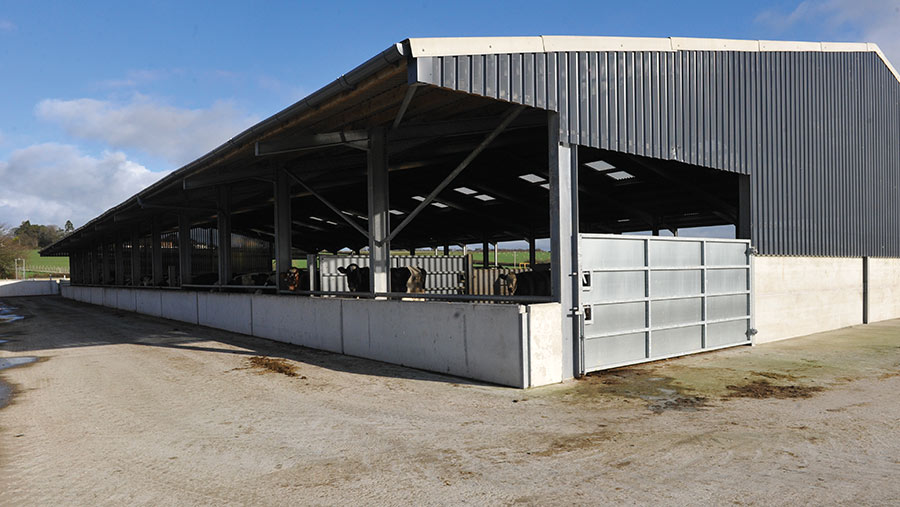 Daily liveweight gains (DLWG) in beef cattle bred from a Pembrokeshire farm’s own dairy herd have improved since the business invested in a new fattening building.

They are being rewarded by higher liveweight gains of 0.5kg in the 90-day finishing period and significant labour savings.

Carwyn Jenkins, who farms with his father, John, and sister, Ceri, gave Farmers Weekly a tour of the building. 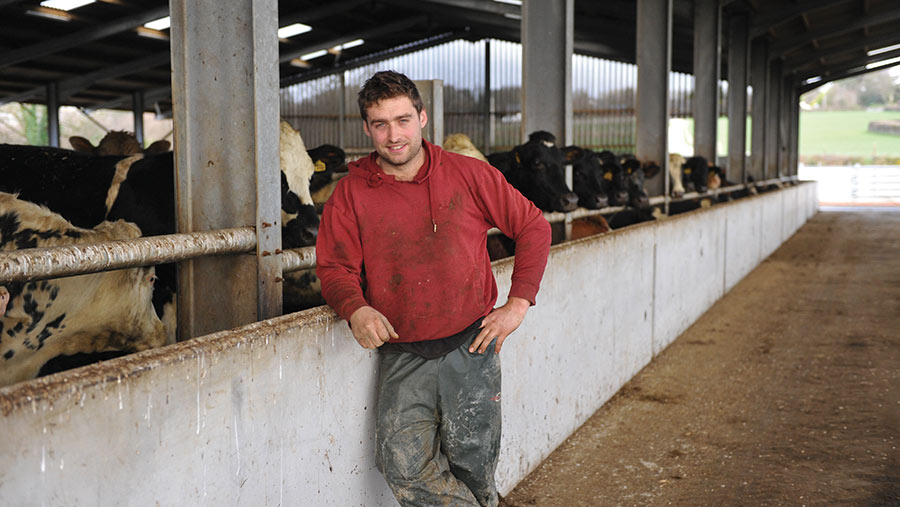 We based it on the same design as our cow cubicles, with feed troughs running along the outside instead of having feed passages in the shed itself.

Our existing sheds had had their day – they were on another farm, so having this one on the main unit is a huge labour saving.

It takes us 30 minutes to feed all 600 cattle once a day, and the shed is slatted, so there is no bedding needed. In the other sheds, it would take us five or six hours a day to feed and bed the animals.

We were going to wait a year before we bought the mats, but having them in place from the start was the best decision we made.

Tell us about the building’s specifications?

There are four slatted pens, which each hold 150 cattle, and we also have a small straw-bedded pen for any animals that need extra attention.

There is a 3m overhang over the feed trough on one side of the building and a lean-to on the other side that covers the other feed trough. We also have a handling area. 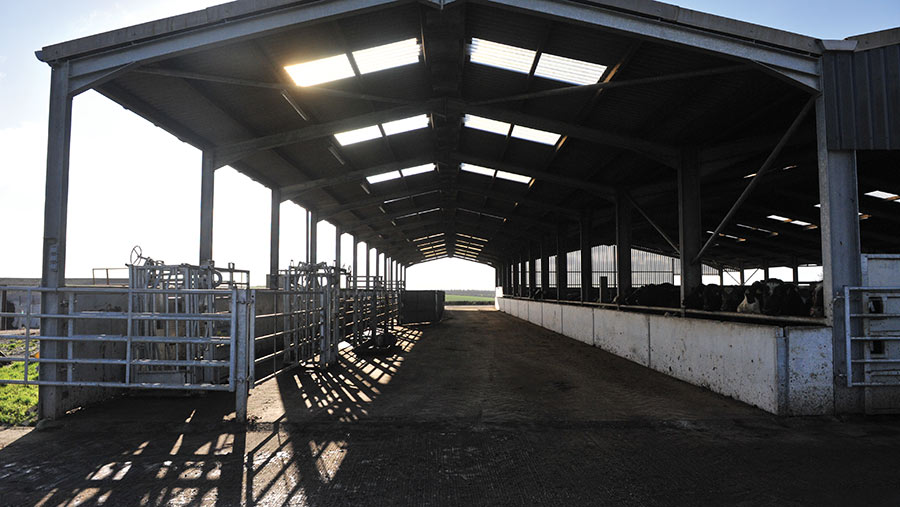 The slatted floor sits over a 3.3m-litre underground slurry tank.

It would take two years to fill that tank with muck from the shed, but we are diverting dirty water from the dairy unit to make the consistency of the muck easier to spread.

We used a local shed builder, John Morris, for the shed, and the underground slurry tank was built by Gwilym Morris. The tank was built in 2018 and the shed in 2019.

Having the feed troughs on the outside of the building has given us more space inside the shed because there are no feed passages.

We don’t get any feed waste, which can be an issue when you are pushing up silage in a feed passage, and there is muck on the wheels of the machine. It costs a lot of money to make silage, so we don’t want to waste any. 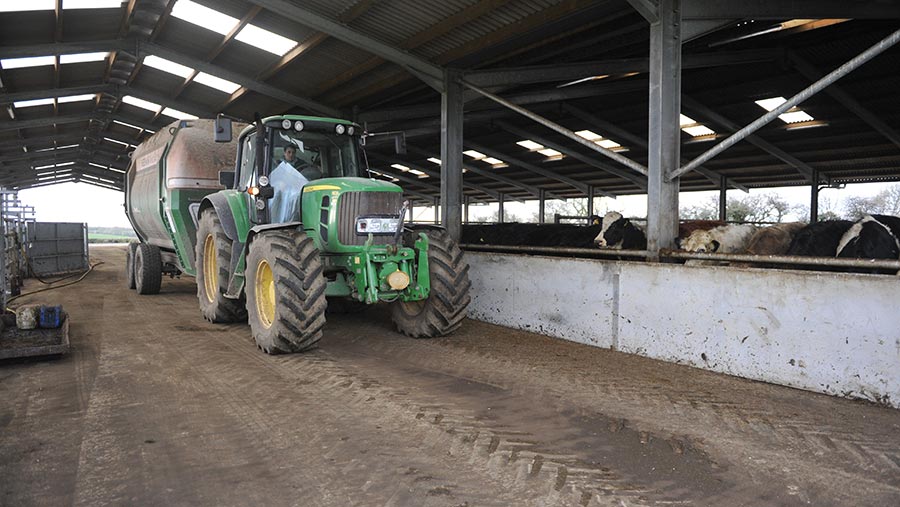 The rubber mats. They have made the building.

We had a slatted shed without mats for 30 years, so we can really see the difference these have made.

Cattle don’t slip on the slats and get injured.

What would you do differently if you were to do it again?

We wouldn’t do anything differently. We knew this design worked well because we have it for the dairy cows.

We did consider putting in walls, instead of having it open-sided, and we thought we could put them in at a later stage, if necessary, but the shed doesn’t need them. 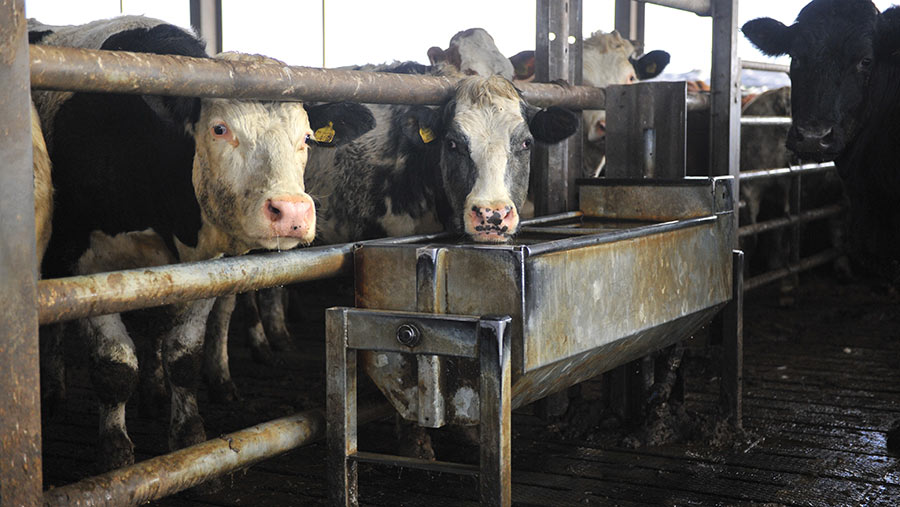 There is a lot of heat generated by 600 cattle, so they are never too cold and the rain can’t blow in because of the overhangs.

The handling area – it is very efficient for routine jobs like TB testing cattle.

The system includes a 14m race, a double-yoke Teemore crush and pens with capacity for 150 cattle. 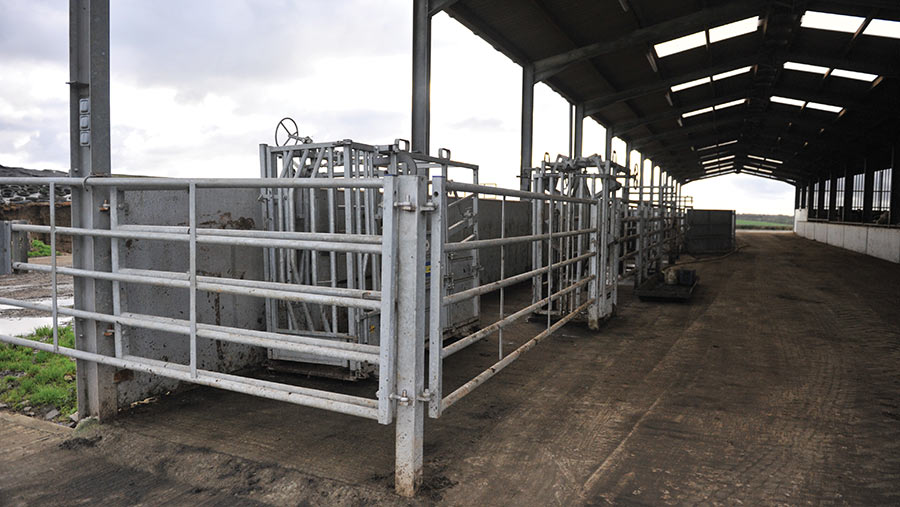 Cattle are averaging 1.7kg DLWG in the last 90 days of the finishing period – it used to be 1.2kg.

We put this down to the cattle being more comfortable and having feed available all day.

The higher growth rates mean we are finishing three months earlier on average.

Cattle-rearing system from birth to finishing

There are 1,000 head of beef cattle on the farm at any one time, from newborn calves to cattle finishing at 27-28 months.

The dairy herd is a flying herd, so all replacements are bought in, which means all dairy cows can be inseminated to beef. This produces 300 beef calves a year for rearing, with another 100 calves bought in annually.

Cows are inseminated to a British Blue, but it is getting increasingly challenging to keep them within weight specification, says John. They target 400kg deadweight for heifers and steers.

Rearing
Calves are reared in individual pens in calf stables that each hold five calves. These were imported from Holland at a cost £5,000 each, but John says calves perform so well in them that he intends to buy more. 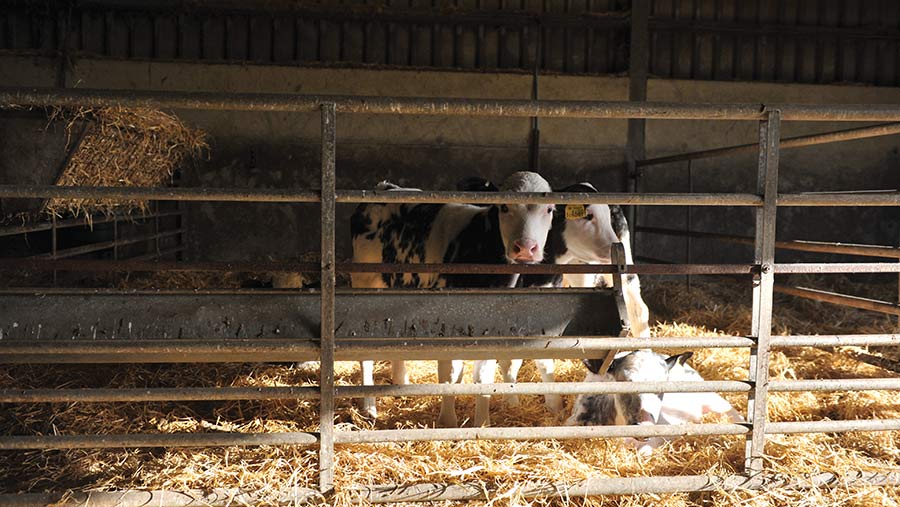 Calves are fed whole milk until they are six weeks old, and are then transferred to straw-bedded pens in a nearby building in groups of five on a diet of calf pellets and straw.

From 12 weeks they are reared in groups of 40 on an outlying farm on grass silage and wholecrop before they are turned out to graze.

Finishing
It is a low-cost system with cattle at grass for two grazing seasons. The cattle graze land inaccessible by the dairy herd.

Heifers and steers are sold to Woodhead and some steers to ABP, with 400 cattle slaughtered annually.