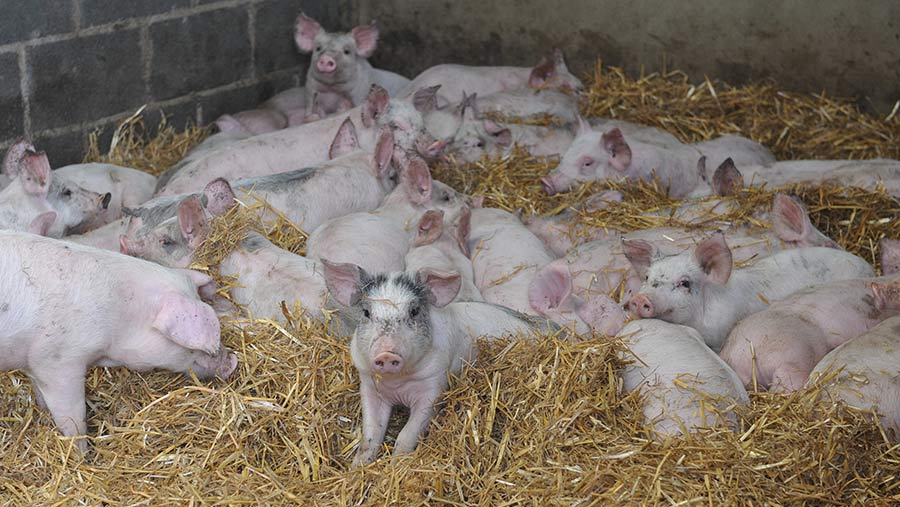 Until four years ago, Luke Starkey was working for his father Scot in a window supply company.

That changed when they bought an 32 ha (80-acre) former dairy farm near Whitland, Carmarthenshire, and established a continuous farrow-to-finish system, selling 70 pigs a week. 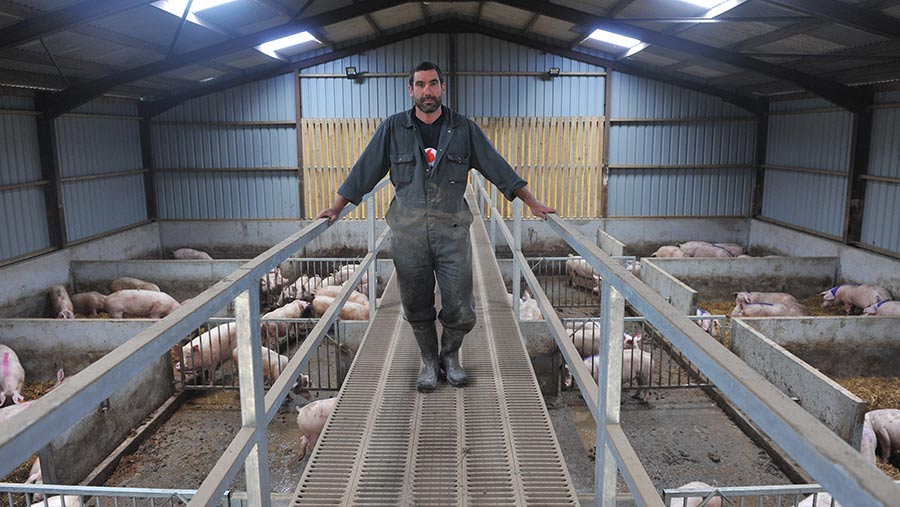 It was initially an outdoor system, but as this didn’t suit the climate they converted buildings at Cilpost Farm to provide suitable accommodation for a herd of Large White/Landrace cross sows.

Opting for a conversion was a cheaper option than new build and it also circumvented possible planning issues.

Mr Starkey gave us a tour of the unit. First stop was the finishing shed, which has been up and running for 18 months.

How did you adapt the shed?

We stripped it back to the shell by removing all the internals. 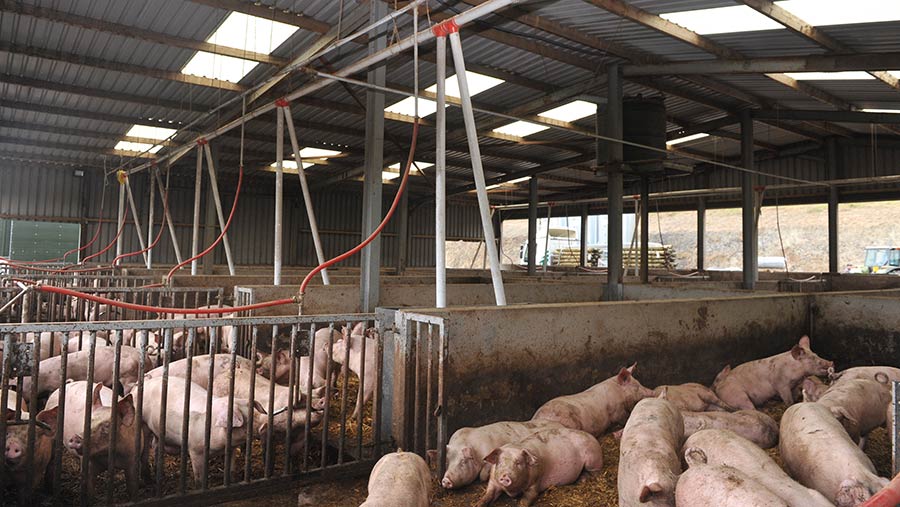 We laid a new floor and put up a new European box profile roof. In retrospect, I would have used fibre cement on the roof, to keep the shed cooler and to prevent condensation.

The roof has a vented ridge.

We hired in some outside labour and did all the work ourselves.

How is the space set up inside?

We draft out the lighter pigs at roughly 21 weeks of age to sell to the pork market and this allows more space for pigs we supply to the bacon market.

Gale breakers that allow us to control the shed temperature. 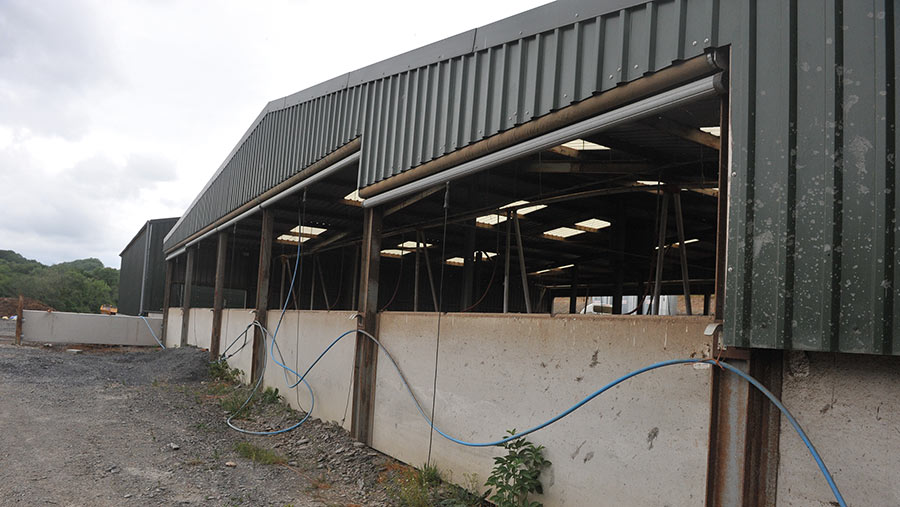 We have 10 in total, five down each open side, which we open and close according to weather conditions.

How is feeding and bedding managed?

Feed is transported from an outside silo by auger to Freedom Foods-approved feeders. 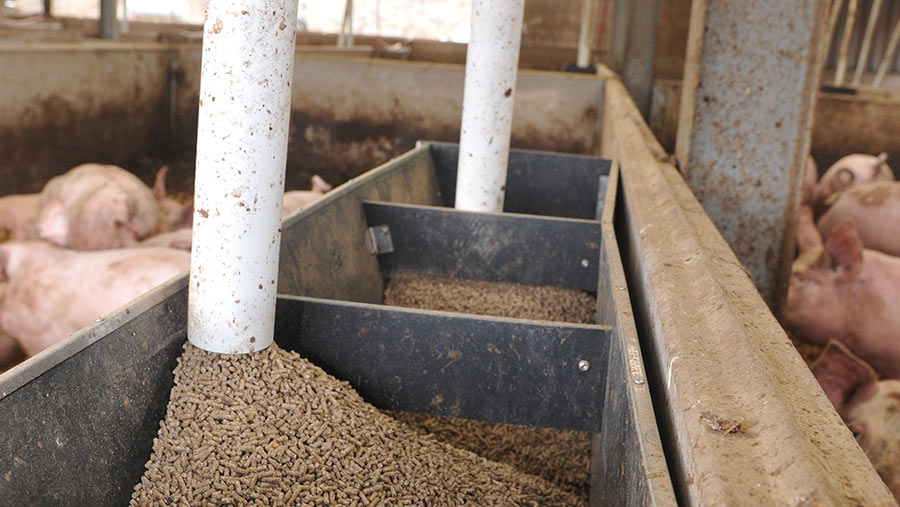 All the sheds have straw-bedded pens.

We could reduce our cost of production by having slats, but I believe welfare is higher on straw. It adds a bit of warmth and the pigs are very happy.

What would you do differently?

Instead of 16 pens, I would have eight.

In the summer months. the back corners of the pens get used for dunging as pigs like dunging in corners but, with bigger pens (18m x 3m), we could hold 60-70 pigs and have a muck passage at both ends.

I think I would put more feeder spaces in too. We have five space feeders which gives us one feed space per seven pigs. However, in the summer months, feed intakes reduce in the day when it is warmer, but the feeders can then be busy once it begins to cool down in the evening.

I would have preferred a taller building, for better air circulation, although this would create issues with warmth in the winter.

It is not easy to get the ventilation right when you have natural ventilation, it’s a fine line between getting good ventilation and causing draughts.

Tell us about the sow building

We converted the sow shed six months ago. This was a silage building and we removed all the internals and raised the floor to bring it to the same level as the other sheds. 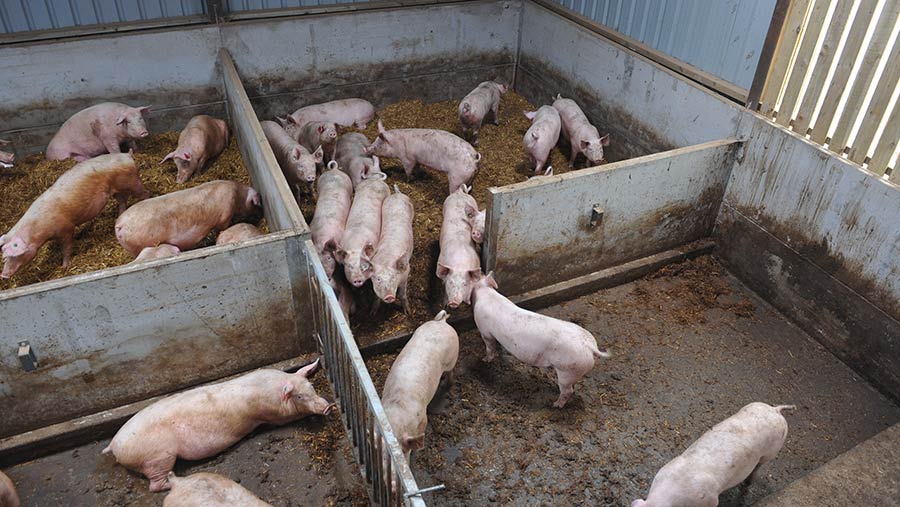 We have Yorkshire boarding at one end, which allows air to circulate through the building.

What is the farrowing setup?

We started off farrowing in Solari-style free-farrowing pens on straw bedding, but we were constantly getting poor performance due to overlays and issues regarding hygiene and it was a constant battle keeping the pens clean.

We also bought some farrowing arks to farrow outside. We really liked this concept but unfortunately our land conditions are far too heavy.

Farrowing crates and slats have now been installed and our performance has increased significantly. We are now weaning more pigs per sow than our born-alive figures 18 months ago.

We have some older Welsh sows on the farm, which are holding our performance back slightly, so we aim to cull these from the herd this summer.

How is feeding managed in the shed?

Each pen has access to a 9sq m raised area with drinkers and a feed passage.

We use bite ball drinkers, which reduce water spillage because the pigs must take the valve fully into their mouth before water is released. 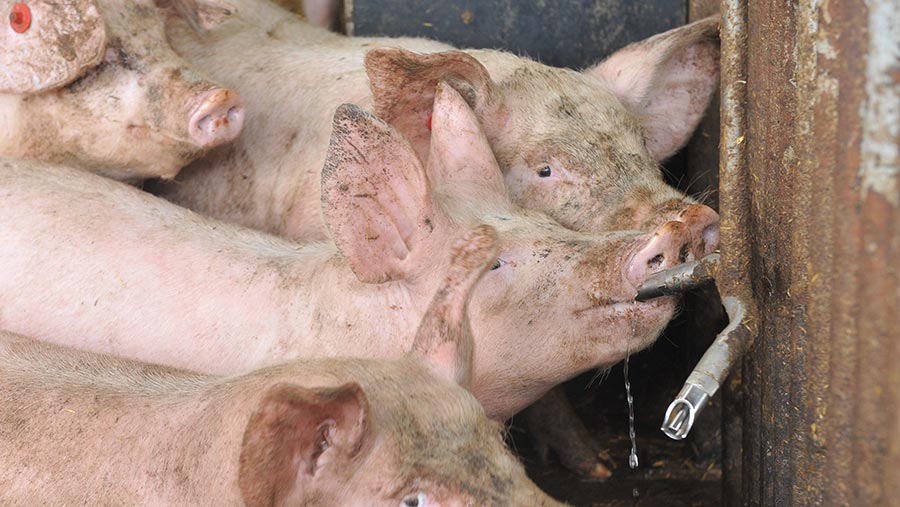 We currently bucket feed in this area with a skid steer, but we intend to install an auger system and drop the feed on to a splash plate that will evenly dispense the feed.

We are getting good performance and good body condition scores from the existing system, but from a financial point of view, if we unintentionally overfeed each pen by 0.5kg a day, that is just shy of £400 a year over 10 pens.

What is the best feature?

This runs the entire length of the building. It is 2.4m above the floor of the pens and allows us to observe the pigs without going into the pens and disturbing them. 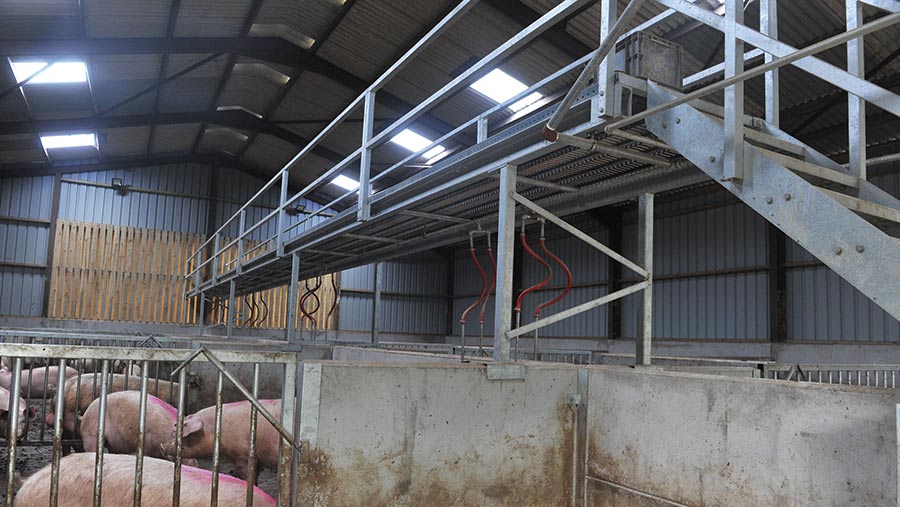 This is particularly useful when we are in service week to allow us to spot sows returning to heat.