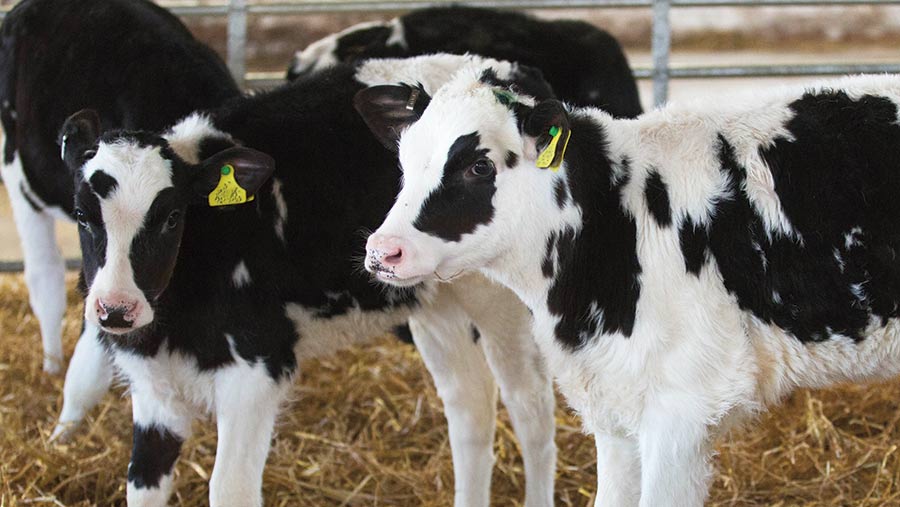 Dairying experts at home and abroad are questioning whether units are achieving heifer growth targets of 0.7-0.8kg/day and if this gain is sufficient for the modern Holstein.

Concerted efforts to serve from 14 months and calve all heifers by 24 months reduces heifer rearing costs from £1.47-£3.35/day, according to AHDB Dairy in 2015, but increases daily liveweight gain (DLWGs) requirements of heifer rearing facilities.

However, many people in the industry say mature Holstein cows are slightly larger on some farms, adding more weight to the argument that heifer growth rates need reviewing.

AHDB Dairy’s Calf to Calving project was launched last year to answer these questions by weighing cows and calves on commercial units.

He says most farms do not do this. His advice for farms is to weigh at birth, weaning, yearling age and service to tailor growth rates according to individual farm needs.

Of 12 monitor farms in the Calf to Calving project, eight were Holstein herds, with average mature cow size ranging from 640-750kg and heifer growth rates ranging from 0.62-0.82kg/day.

In every stage of growth DLWGs varied from about 0.1kg to more than 1kg. In some instances, nine- to 12-month-old calves lost weight due to grazing low metabolisable energy grasses last summer.

“Getting heifers into puberty and cycling is so important. There is much more chance for them to start cycling and have two to three cycles before service.

“We’ve also learned that weigh scales are an important bit of kit as farmers and vets alike often struggle to judge weight by eye and can be more than 100kg out.”

Mr Dodd says the weigh results showed both growth rates and cow size varied hugely, both on farm and between farms.

One possible reason for larger cows is that some breeders are unaware of the last rebasing of the Holstein breed in 2014, explains Mr Dodd.

This was when values for traits and type were recalculated to cater for changes in the breed average.

“Some people were not aware that type was reassessed, meaning they were unwittingly selecting for bulls with more stature, which is a 50% heritable trait,” he explains.

With the new calculations, a bull rated +2 for stature became a +1 bull for stature the next month because of the rise in averages. If farms weren’t aware of this then they were using bigger bulls without knowing. 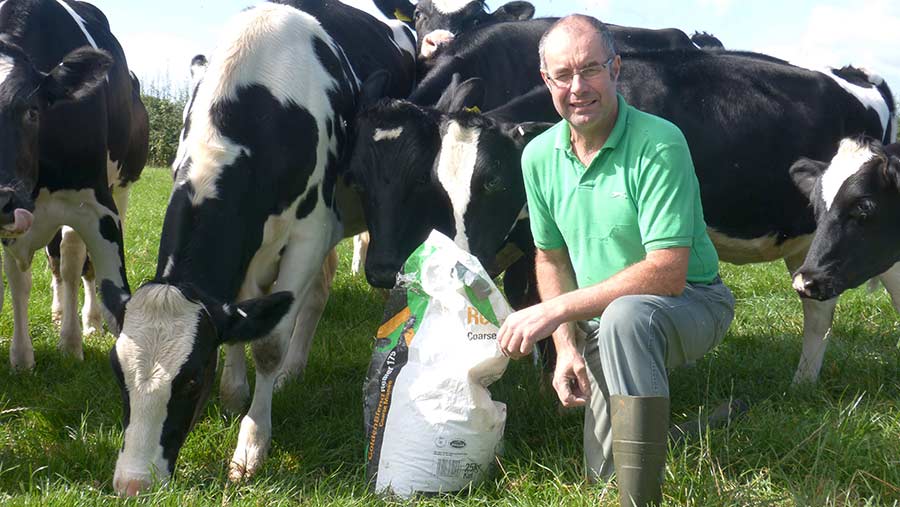 More regular measuring of cattle and particularly youngstock means every heifer now calves down by 24 months of age at Curlew Fields.

The Hildreth family’s meticulous approach to heifer rearing has been focused by the AHDB Calf to Calving initiative, explains Roger Hildreth.

Since 2012, the Hildreths have been made a concerted effort to improve calf rearing. Previously, the only metric was not serving until 380kg – DLWGs were considered but not as closely as now.

This brings total rearing savings of about £1.90/day.

But back then heifers were only weighed for service weights in a weigh-crush with a swinging needle scale. Now service weight is at least the sixth the heifer’s been weighed and it’s with an electronic weigh cell.

Tom explains: “This last year we’ve learned vets and farmers cannot guess the weight of animals. There are always surprises when we weigh things and the weigh band is very accurate.”

Mature cow size is a little high, explains Roger, who is targetting 1.5kg of milk solids per kg of bodyweight from his cows.

Historically, at 1.1kg of solids and now just in excess of 1.2kg, the Hildreths only use bulls rated at a maximum of +0.5 for stature and a minimum of £600 PLI, while heifers below 270 PLI are sold.

This is so cow size and bodyweight can be controlled to take production up to 1.5kg, explains Tom.

What changes has weighing brought about?

A debate is raging in the US about what weight gain rate we should be expecting from our dairy heifers.

How can we tell if this is fast enough? An accepted rule of thumb is heifers should reach a weight of 85% of mature body weight at calving. If the heifer weighs 624kg then older, more mature cows in the same herd would be weighing about 730kg (624 divided by 85 x 100).

Are we falling short?

These scenarios seem short of what I see on a lot of my units where I see cows that are bigger in frame and depth of body. Cows that are often sent to market not weighing 600 or 700kg but 750-800kg or even more.

Maybe we can look at this subject from a different angle. Say that we are aiming for this heifer to weigh in at 625kg after giving birth, as we agreed earlier.

This stance negates the acceptance of growth needed to support and produce a live calf inside of her. After all, she is carrying a calf as well as the placenta that feeds it. An additional 80-90kg on top of her target bodyweight.

Time for a rethink

How many of us are reaching these sort of growth rates? Do not forget, this is before we start talking about growth checks due to disease, ration quality, overstocking in the pens.

Is this why, when I analyse herd milk production against days in milk or do simple lactation graphs, it is always the heifers that are highlighted as doing a lot poorer than average.

Heifers are the most genetically superior animals in the herd. Their target for peak production in early lactation should be some 80% of the mature cow’s peak yield and yet I have often found them to be more like 70-75% .

“Are we using 20th-century know-how to feed our 21st-century heifer? My proposition is maybe it’s time to have a rethink on how we invest in the future stock of dairy herd, helping them to realise their full genetic potential. What do you think?