Infected midges blown on the wind to Britain from Europe are the most likely cause of the Bluetongue (blue tongue) outbreak, says a DEFRA report.

DEFRA published its first epidemiology report into the Bluetongue outbreak on Tuesday (30 October).

Infection is likely to have been introduced by the windborne transmission of infected midges from continental Europe, says the document, ruling out the possibility that the midges were transported by man or that the disease was introduced via an imported animal carrying the virus.

This is likely to have occurred on the night of 4/5 August.

Britain’s first case of Bluetongue was confirmed in a native born Highland cow on a farm near Ipswich on 22 September.

Test results subsequently indicated the clinically affected cow had been infected for up to 20 days before it was confirmed with Bluetongue.

The majority of infected premises have only one infected animal and the prevalence is generally low, it says.

Surveillance and testing are continuing in a bid to determine the geographical extent and prevalence of the Bluetongue infection. 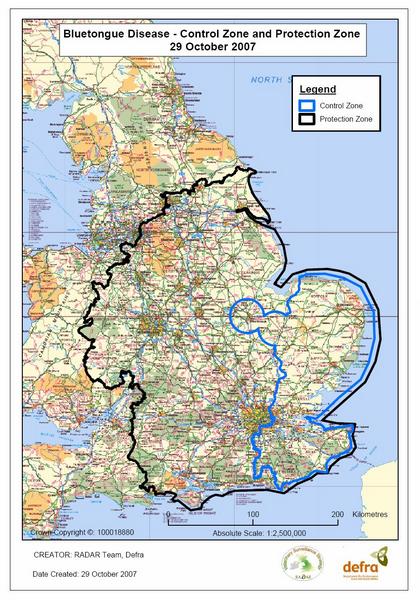