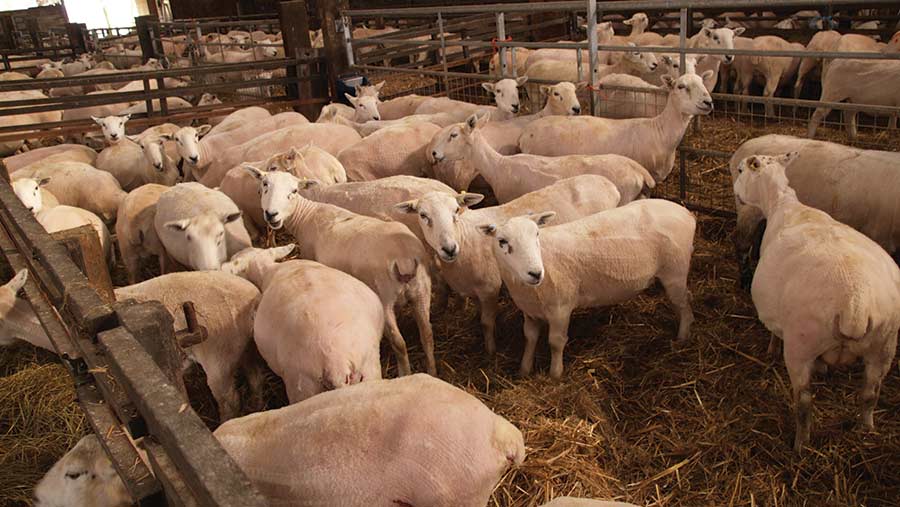 Shearing pregnant ewes in January is increasing stocking density at housing by 20% on one Welsh farm.

John and Sarah Yeomans have been shearing all their ewes six weeks before lambing since 1987.

It was an idea Mr Yeomans picked up while studying agriculture at Aberystwyth.

He put it into practice after ewes displayed signs of heat stress in a new shed he had built at Llwyn y Brain Farm, near Newtown.

“The shed is very open but we had a few ewes go down with heat stress, so we thought they would be better off without their thick fleeces.’’

After tupping, the flock of 660 Beulah ewes graze hill land from early December. The ewes come off the hill in late January, although earlier if the weather conditions are poor. They are scanned and shorn within a couple of days.

Once shorn, they are penned according to the number of lambs they are carrying, in groups of 28. “That is the ideal number for our pen size. We group the yearlings together. We sort according to body condition and feed accordingly to avoid getting big lambs,’’ says Mr Yeomans.

1. Condition score – ewes must be in the right condition and should not be shorn if at BCS 2.5 or less.

2. Shear as soon as ewes are housed – ideal time is six to eight weeks before lambing.  This allows sufficient time for a fleece to grow to 15-20mm by turnout.

3. Turnout date – winter-shorn ewes should not be turned out before mid- to late March. Even when there is sufficient wool growth, newly lambed ewes should have access to good shelter.

4. Good source of forage – feed budgeting should take place well in advance of shearing to ensure sufficient forage is available.

“Thin singles might have a similar ration to the fattest twins. It sounds complicated but this system doesn’t take much longer. We feed silage ad-lib, which is cut with a shear grab and forked out.’’

As well as facilitating a higher stocking density at housing, Mr Yeomans says a shorter fleece is more practical for his system at lambing. “You can see what is going on as soon as they are lambing.’’

The flock also makes better use of forage. “The ewe thinks it is colder than it is so she makes better use of her food to maintain her body heat and this helps with lamb viability. It is also good for controlling size because some diets can result in lambs that are a bit on the big side because they are not fully utilised.’’

The flock lambs in mid-March and the ewes and lambs are turned out to grass.

Mr Yeomans says critics of winter shearing will argue that turning the ewes out six weeks after shearing is not ideal. But he argues that there are real benefits.

“Lambs aren’t born with thick fleeces and they are turned out in all sorts of conditions. If their mother doesn’t have a thick fleece she is more inclined to take her lambs to shelter when the weather is poor.

“When we had those terrible blizzards in 2013, we held everything indoors for as long as we could and we had very few losses when they were turned out. We were no worse off than any other flock.’’

Once out at grass, ewes are less inclined to get stuck on their backs because they are not encumbered by a heavy fleece.

Mr Yeomans admits there are some downsides to clipping out of season, but says these are minor.

“The ewes can be difficult to catch in the pen because there is very little to grab on to, but the Beulahs are good mothers and if you pick up their lamb they will usually follow.’’

“The ewe lambs tend to struggle a bit when you shear them and if they are in lamb then that’s not ideal,’’ says Mr Yeomans.