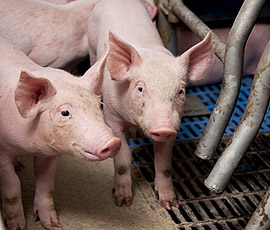 Five workers have been suspended by the Norfolk pig producer at the centre of animal cruelty allegations.

A statement issued by the East Anglian Pig Company on Wednesday (25 April) said it did not tolerate any animal mistreatment or malpractice.

It follows undercover footage apparently showing pigs being beaten, mishandled and killed on two of the company’s farms.

The EAP statement said: “We have carried out a full internal investigation during the last three days following the release of the historical edited film footage taken in December 2011.

“This has resulted in five employees being immediately suspended from working as of yesterday and [they] will be subjected to disciplinary action.”

Activists from Animal Equality claim to have filmed more than 120 hours of footage and taken 278 photographs to provide a “truly shocking insight” of the British pig industry.

EAP is one of the country’s biggest pig producers.

Two of the company’s Norfolk farms were targeted – a weaner unit at Little Thorns, near Swaffham; and The Piggery at Didlington, near Thetford.

Footage and photos were subsequently shown the Sunday Mirror, which published an expose article on Sunday (22 April).

So too did Sainsbury’s and the Co-operative Group.

The RSPCA suspended one of the EAP farms from its Freedom Food Scheme.

The charity said it was continuing to review the footage. It was too early to say whether there were grounds for prosecution, an RSPCA spokeswoman told Farmers Weekly.

The farms targeted by Animal Equality are audited by the Red Tractor assurance scheme, which pledges higher welfare.

In a statement, Assured Food Standards, the organisation that oversees the initiative, said it did not tolerate any animal mistreatment.

“We also adopt the emergency slaughter policy of the Pig Veterinary Society and the Humane Slaughter Association Guidelines,” said the statement.