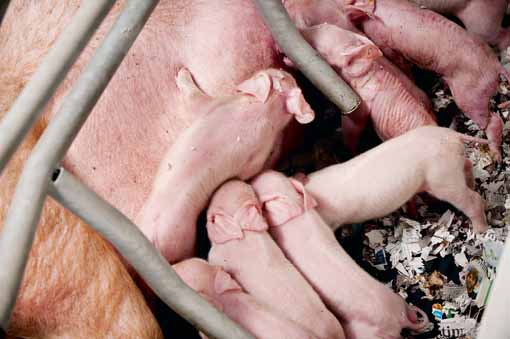 As farmers come under more pressure from the EU to reduce reliance on antibiotics and margins in the pig industry get squeezed ever tighter, the fight to tackle endemic diseases hots up.

And one disease that is sucking the profitability out of pig production is PRRS. According to recent figures presented to the Pig Veterinary Society by John Richardson, the overall cost of PRRS in a growing and finishing herd, where vaccination is used, equates to about £3 a pig sold or roughly £35,000 a year for the progeny of a 500 sow herd.

It’s a cost that soars to £50,000 when vaccination is not used, with the costs based on the combined estimates of the adverse productivity effects of the disease from a survey of 12 leading UK pig vets.

Moreover, costs of PRRS in a breeding herd can be even more detrimental at £93,000 in the year following a breakdown. PRRS is such a damaging problem because of this ability to affect both the breeding and feeding herd, says vet Richard Pearson of the George Vet Group, Wiltshire who has witnessed farmers forced out of the industry due to the cost of PRRS.

“The impact of PRRS on an individual unit varies and can be dependant on farm size, health status, other diseases present and management practices such as All In / All Out,” he adds.

But with pig profitability on a knife edge, it is a disease farmers really need to get to grips with. “Incidence of PRRS in the UK could be as high as 50% in areas of high pig density, but with farm health status something of a ‘movable feast’ nothing stays the same forever.”

And it’s for this reason Mr Pearson says action is needed by individual farms and vets, as well as participation in current regional and national initiatives.

“One of the stumbling blocks to health improvement is the conception that it’s pointless investing to improve pig health if my neighbours don’t. And while an individual farm health status is tied up with the health status of their neighbour the UK has got to start working together and up their game.

“The guy down the road is no longer your competitor but imports from Europe are. Put simply, we have got to get better and it is only by working together that we can make meaningful and sustainable improvements.”

PRRS is a viral disease that infects pigs from farrow to finish albeit with different symptoms. In the breeding herd symptoms include abortion, early farrowing, birth of weak and stillborn pigs and delayed return to, cyclicity.

However, in the feeding herd the disease is a significant problem due to its immunosuppressive effects. “This opens the pig up to a whole host of other pathogens such as swine influenza, pasturella or meningitis.” he says.

PRRS requires the pig as a host to multiply, with older pigs passing the virus on to younger “naïve pigs”. “The whole process of spread is reliant on new pigs coming in which become infected. When there are no new pigs coming in, the disease will eventually die out,” he says.

Spread can also take place from farm to farm by movement of animals, mechanical vectors including flies as well as aerosol spread. “This just reinforces the importance of the industry and neighbours working together to help get on top of the problem,” says Mr Pearson.

What is being done to control PRRS in the UK?

And the UK pig industry is beginning to work together more coherently in a bid to get on top of endemic diseases, such as PRRS. The Pig Health Improvement Project (PHIP) is encouraging farmers to sign up and take a collaborative and, action-orientated approach to reducing disease by working closely with vets and other producers.

By identifying the key disease challenges in each region, the aim of PHIP, is to get one step closer to eradication through the improvement of biosecurity, coordination of health improvements between neighbours and the full support and integration of all those who impact upon farm businesses.

“By getting involved in PHIP it will bring producers together to start cooperating. After all, tackling the disease alone will bring shorter term gains than if it is tackled at a regional or national level,” says Mr Pearson. 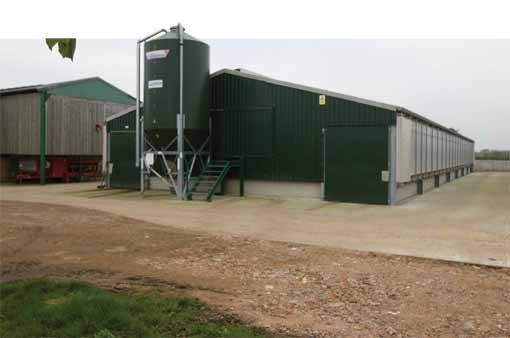 How do you tackle PRRS on your unit?

And even though PRRS control is unit specific, the first step to controlling the disease is finding out threats in the locality.

“Before embarking on a health improvement programme its important to make sure any programme is sustainable and this is where it is important to get producers working together,” says Mr Pearson.

But ultimately on some units, particularly farrow to finish units, a partial or full depop may be necessary to eradicate the disease, explains Mr Pearson.

“On farrow to finish units it is essentially a viral factory all on one unit so it is a more challenging scenario as there is always a constant supply of ‘naïve young’ pigs keeping the disease going. But it is possible to control by strategies such as partial depops.”

However, PRRS is easier to control on units where animals can be reared on different sites and the process of load-close-homogenise can be applied, says Mr Pearson.

“This basically means farmers load the farm with breeding gilts prior to closure to reduce the drop in reproductive females during closure. Step two is to make sure everything goes through the infection stage. The goal is to make sure the immunity of all animals is the same. The last stage is to close the door and make sure no non infected animals are coming in and piglets born are reared offsite.

“This means there is no where for the disease to hide and because no new ‘naïve pigs’ are coming in the disease dies out,” says Mr Pearson.

Vaccines are also a useful strategy. “Both killed and modified live viral vaccines do have a role for the control of PRRS and also in stabilising herds in partial depopulations. It is just another important tool in the armoury.”

Mr Pearson adds: “The nirvana is for the whole of the UK to become PRRS negative. However, in reality it is more likely eradication will only be possible at first on a regional basis and with a coherent approach.”

The Danish approach to eradication

In eastern Jutland, Denmark the number of PRRS positive herds has dropped from 80% in 2000 to just 20% currently due to a regional control programme.

According to Anders Elvstroem, a vet at Odder Swine Practice, the secret to reducing PRRS incidence has been by sharing health information via a public swine register, along with targeted vaccination of gilts and a strict all-in-all-out policy.

Mr Elvstroem says farmers in the area haven’t been forced to do it but actually want to eradicate the disease due to the financial benefit.

“A PRRS negative pig costs £3 more than a PRRS positive pig at 30kg when they are being traded. And with pig margins tight, the only way to improve the economy as well as pig health is to control PRRS. Pig price is pushing development,” he says.

Mr Elvstroem admits the biggest challenge is the way the buildings are structured, but says farmers have even rebuilt, not just for PRRS control but also to bring them inline with changes to EU legislation, to create true all-in-all-out buildings.

“Of the producers that I have seen that have eradicated PRRS, none of them have regretted their decision in investing in AIAO.

“By having a true AIAO building and also having separate breeding and finisher units, eradication procedures on units have worked, even when farms have been in full production.

Eradication starts by vaccinating all gilts using a live PRRS vaccine. Piglets born are subsequently PRRS negative and the PRRS virus is then eradicated by strict AIAO principles. “It takes nine-12 months to eradicate disease from a unit using this method,” he says.

Mr Elvstroem adds: “Its important pig farmers are transparent, and having a central public swine register has helped this. By working together, PRRS eradication is definitely something that could be rolled out and controlled on a national level, it’s a matter of if the industry want to do it not can we do it.”