A 6ft 4in Holstein steer called Danniel is making a stir in California where locals are anxious to discover if he is a record breaker.

Jaws drop and eyes widen at the humongous Holstein, which produces an impressive 68kg/day of manure.

Farmer Ken Farley, who treats Danniel as a pet at Lost Coast Hay farm, says the 1,043kg giant is just like a big puppy. 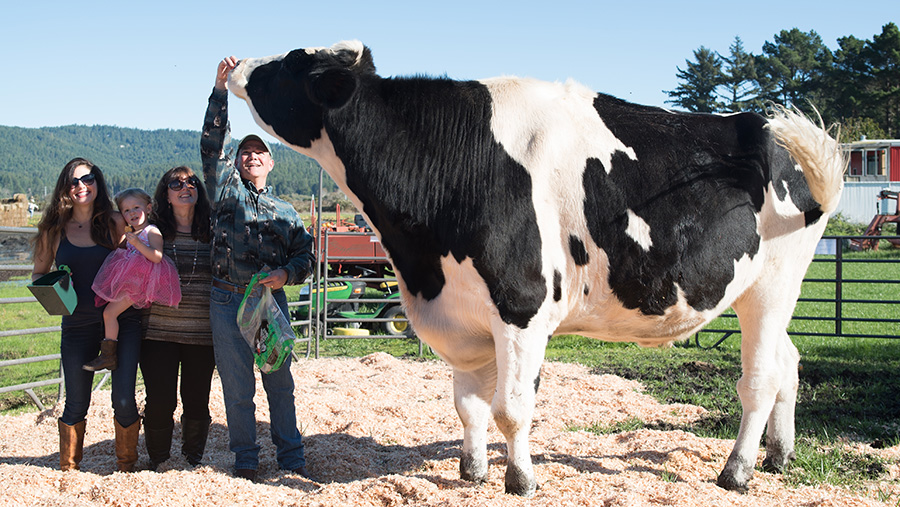 Living near the appropriately named town of Eureka, the super steer’s daily diet is reported to include 45kg of hay, 2.2kg of grain and 454 litres of water.

Eating four times that of his stable mates, locals think Danniel could be a record breaker.

Being both a steer and a US Holstein could go some way to explaining Danniel’s stature, explains Darren Todd of Holstein UK.

“Its also fair to say the breed in the US and Canada is slightly taller.”

Dr Todd said the famous Picston Shottle was an example of a popular sire in the dairy industry with great stature.

If verified, Eureka’s Danniel breaks the record set by 6ft 2in Blossom, from Orangeville, Illinois, which died in 2015.

Blosom was 190cm (74.8 inches) and was officially recognised as the tallest cow earlier in the year to the delight of owner Patty Meads-Hanson who had the colossal cow for 13 years from being eight weeks old.

“We unfortunately lost Blosom so the record for the tallest cow (living) is without a holder,” said a spokesman at Guinness World Records.

“If the claimants can submit their evidence we are more than happy to review this and ratify the record should he meet the guidelines.”