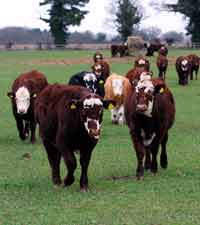 With gut parasites on the rise due to moist conditions, planned worm control could save costs this summer.

Waiting until clinical signs show such as weight loss and scours in youngstock means losses are already stacking up. But using a product with long-term efficacy would be more cost effective.

Continuous action from the slow release of active ingredient in Panacur Bolus, fenbendazole, kills all major stomach worms and lung worms. It’s effective for 140 days preventing the build-up of infective larvae on grazing at turnout. It also allows a small controlled level of worm development to stimulate natural immunity to lungworm.

In turn poorer growth rates and bodyweight losses mean that in replacement heifers, puberty and age at first calving will be delayed. It also means finishing periods will be extended.