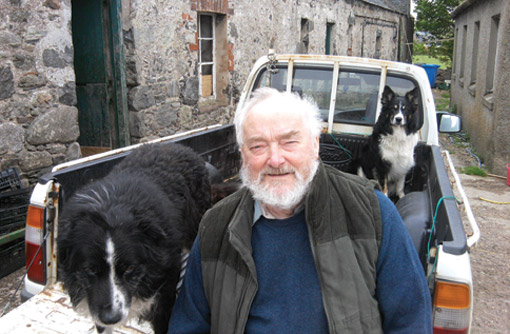 You think farming is hard now? Go back 60 years to when Queen Elizabeth came to the throne, it was a time of portable bucket milkers, month-long silage-making and sore backs. 78-year-old dairy producer Hamish Mackenzie shares some memories from farming in Stornoway on the Isle of Lewis.

The further you go back in time, the harder farming was. Nowadays, it’s a cake walk – you can sit around on your backside all the time.

Sixty years ago we were milking 50 Ayrshire cows at the tenanted Melbost Farm. They were kept in old-fashioned byres with stalls from September until May, and milked with six portable bucket milking machines taking four men 2.5 hours. They were fed hay, straw, turnips and some concentrates.

Back then a good cow would give you 1,000 gallons (4,500 litres). All the milk we sold was raw; it was cooled in a surface cooler and put into glass bottles or a can with a tap on it. We delivered within a two-mile radius and got sixpence a pint (2.5p in decimal currency).

The real boom time for the milking business was in the 1970s – we were getting a lot more for a pint than they were on the mainland. We were competing against people importing milk who had to pay freight, but we were producing it at mainland prices and selling it at island prices. We got one shilling and six pence a pint.

The weather was very unsettled in those days and the summer of 1971 was the last time I ever made hay – it was an awful chore in the wet weather and the quality wasn’t good. The first silage cut was done with a buck rake in 1970. It was very labour-intensive and there were a lot of sore backs at that time – after the buck rake had gone over it we had to spread it out with rakes. We only got one cut of silage and we did it when the grass grew. Last year it took us 10 days, but back then it would take us months to do one cut.

We only started pasteurising milk in 1983 when it became law. Before then we had the edge because people liked the fact the milk wasn’t pasteurised. A lot of them remembered the days when they were on the croft with a cow.

I’d say dairy farming went wrong with the collapse of the Milk Marketing Board. In the 1990s we were importing quite a lot of milk from the mainland and we had to pay the price the distributors were selling it for – that’s when we stopped milk production at Melbost. Trade also went down when supermarkets came to the island – we couldn’t and cannot compete with them because the distributors are putting milk on the supermarket shelves cheaper than they are selling it to us.

We’ve only got 40 cows now – mainly Holstein Friesians because we can’t get anything else. The industry has gone wrong with Holsteins – the Friesian is a much more superior breed. We still have a 14-year-old cow, milking well, from the late Alistair Mann’s Blackisle Friesians herd. And back when we had Ayrshires, we had plenty 15- to 16-year-old cows giving great yields, but nowadays four lactations is a luxury with a Holstein.

My most memorable moment in the past 60 years has to be a very special milk delivery 10 years ago. It happened on a Saturday afternoon; I got a call from the woman at the airport control tower asking if I would be able to take down about 150 pints of milk to the airport as soon as possible. I asked what on earth someone was going to do with all that milk and then the penny dropped that it was for the Royal Yacht. The helicopter man paid me on the spot. It was definitely the highlight of my time farming.

Unfortunately, I am now drawing to the close of my dairy farming career. There won’t be any dairying on the island at this time next year – we just cannot compete with the supermarkets. I feel a lot of relief because milk production is a seven-day job and I’ve been doing it since I was a wee boy. But I never thought 60 years ago that the industry would end up like this.