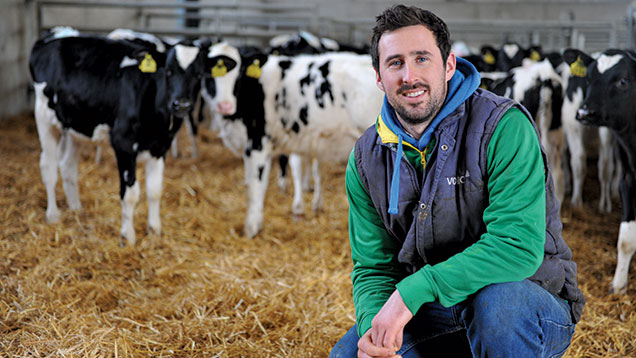 A strict policy of retaining only the most productive cows to breed herd replacements is allowing a young Irish dairy farmer to maximise herd expansion in the run-up to the ending of the milk quota regime.

Niall Tallon has focused on expansion since joining his parents, James and Audrey, in the family dairy farming enterprise in County Meath in 2006.

A tough culling policy combined with selecting Holstein Friesian sires with the highest economic breeding index (EBI) for fertility has cut his calving index by 27 days. The herd is yielding 7,500 litres at 3.4% protein and 3.9% butterfat.

“We cull cows that don’t work in our system, those that are genetically poor. The cows that are staying in the herd are the ones whose mothers were doing the business. We were breeding off bad animals for years, but my message to anyone who is now growing their herd is to not keep on animals that give them trouble, it will only take them nowhere fast.”

The Tallons calve 55% of the cows in the spring and the remainder in the autumn.

“The cows that are staying in the herd are the ones whose mothers were doing the business.” Niall Tallon, County Meath dairy farmer

“EBI has put a structure to our system,” says Mr Tallon. “We used to select for looks, milk and type but that wasn’t really paying its way. We sell our surplus heifers and we get paid as much for them now than when we were using high type sires.”

Heifers are served according to weight not age. “We target 350kg and if the heifer is 12 or 13 months we will serve at that age but it is usually about 15 months with all heifers calving for an average 24.5 months,” says Mr Tallon.

Submission rate for the spring herd is 80% and 90% in the autumn block. Mr Tallon attributes the lower performance by the spring cows to the distance they walk to be milked – the furthest field is 3km from the parlour.

He would like to tighten the spring-calving block to facilitate easier grazing management. “A calf born later in the spring block doesn’t work as well on grass,” he says. All replacements must be born between the middle of January and the end of March.

Ten kilometres of cow tracks enable grazing to be maximized in both the spring and the autumn herds. One kilometre of concrete tracks has been added in the past few years. “Concrete is expensive, but it is the best surface and means the cows can graze late and early in the season, even when the weather conditions are far from ideal,” adds Mr Tallon.

When he first started farming in 2006, milking 70 cows on an outlying farm, he was the only young entrant to the Glanbia supplier pool.

Now, as Ireland gears up for the removal of European milk quotas next April, the prospects for new entrants are more appealing.

Mr Tallon says quotas have not held the farm back because the family was able to expand the herd from 350 in 2008 to 500 today, but the ending of the production limiter will accelerate further growth. The farm is capable of supporting a milking herd of 650 cows and Mr Tallon is likely to be achieving this figure by 2017-18. He sells about 60 surplus heifers a year.

The Tallons use similar National Cattle Breeding Centre EBI sires on the autumn calving herd as for the spring cows. “One animal fits all systems, says Mr Tallon.

Gareth Davies, of Ireland Genetics, the UK subsidiary of the National Cattle Breeding Centre, says the EBI is not only for spring milk systems. “The same benefits can be achieved in autumn-block calving systems,” he says. “The right cow enables the system. The EBI is revaluated annually by Teagasc and allows the farmer to produce cows to fit the system rather than needing to change their system to fit around the cow.”