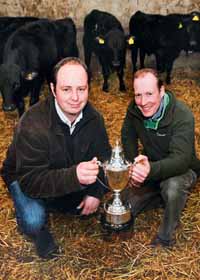 Winners of this year’s Fantasy Farming League was the “Young Ones” team of Peter Chantry from Goole, James Broadwith from Bedale and Rob Middleton from Masham, near Ripon, who achieved a profit of £1051.50 for their eight bulls.

The team’s winning performance – based on their mixed pen of Brown Swiss, Montbeliarde, British Friesian and Holstein bulls – showed their cattle had an average slaughter age of 269 days at an average weight of 307kg. The bulls sold for an average 249p/kg. The average total cost of producing each bull was £600.64 and the average return was £750.86. Their pen contained the highest weight-gain animal at 1.91kg a day.

The Fantasy Farming Beef League comprised 10 teams, each managing a pen of dairy bull calves. The teams of three, each made up of two beef farmers and one dairy farmer, were given eight calves to manage from twelve weeks old to finishing.

The calves were kept at Askham Bryan College and monthly meetings were held throughout the finishing period involving advisors and nutritionists.

Steve Powdrill, EBLEX national selection specialist, said this year’s competition had shown the need to target dairy-bred bulls in Fat Class 3. “Deductions for cattle in Fat Class 2 and 4H were between 12-16p/kg compared with those in Fat Class 3 or 4L – that is about £42 a head.

“We have to ask ‘Does weight pay?’ When we evaluate bull performance data from this year’s competition we see interesting trends.

Hitting targets at every stage of the finishing system

Farmers must ‘get more on the ball’ when seeling beef