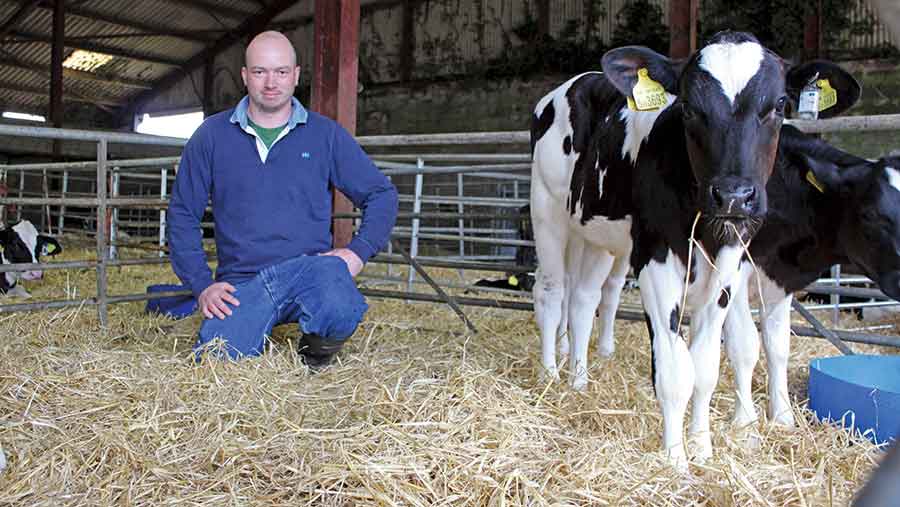 Dairy farmer John Baggs takes the view that if you invest in the milk feeding stage you’ll be rewarded with stronger, healthier animals in the milking herd and better store prices.

Having tackled efficiencies in the 290-cow Holstein herd, in January last year Mr Baggs shifted his attention towards the calf shed.

Faced with pre-weaning mortality rates of 16% and historic issues with pneumonia, he decided “enough was enough”. As a result, he has reduced disease incidence, driven down mortality to 3% and improved growth rates.

“We want to improve our heifers so we produce nice, healthy replacements. We’re trying to improve efficiencies as it makes business sense,” explains Mr Baggs, who rears all his own replacements and sells beef calves as stores.

The drive to improve performance has been a joint effort between the farm team, vet Matthew Burge of Damory Vets and Sophie Mahendran from the Royal Veterinary College (RVC).

Having identified pneumonia and scours as the main causes of calf losses, colostrum management was one of the first areas the team decided to look at.

“We were feeding three litres through a tube as soon as possible after birth and leaving the cow with the calf for two days, but I felt it wasn’t reliable enough,” explains Mr Baggs, who farms in a family partnership at Worgret Manor Farm, Wareham.

Traditionally all colostrum was collected at the first milking, two days after calving, with everything frozen in unlabelled bottles for tube feeding.

Calf blood test results looking at total blood proteins showed half of calves were not receiving adequate colostrum. As a result, the decision was made to change management.

“We decided to take up Matt’s advice and start feeding six litres of colostrum in two feeds by 12 hours and take the calves off the dam on the day of birth and put cows through the parlour on the same day,” explains Mr Baggs.

Colostrum quality declines over time, so by collecting it immediately after calving, the quality of stored supplies also improved. Now, colostrum is also tested using an on farm refractometer bought for £15 from eBay which assesses immunoglobulin (Ig) levels.

A drop of colostrum is placed on a prism on the refractometer. This is then held up to the light and a reading can be taken as an indication of Ig. This test enables the highest quality colostrum to be identified, labelled with dam and immunoglobulin levels, and frozen in 3-litre, sterile, foil bags. 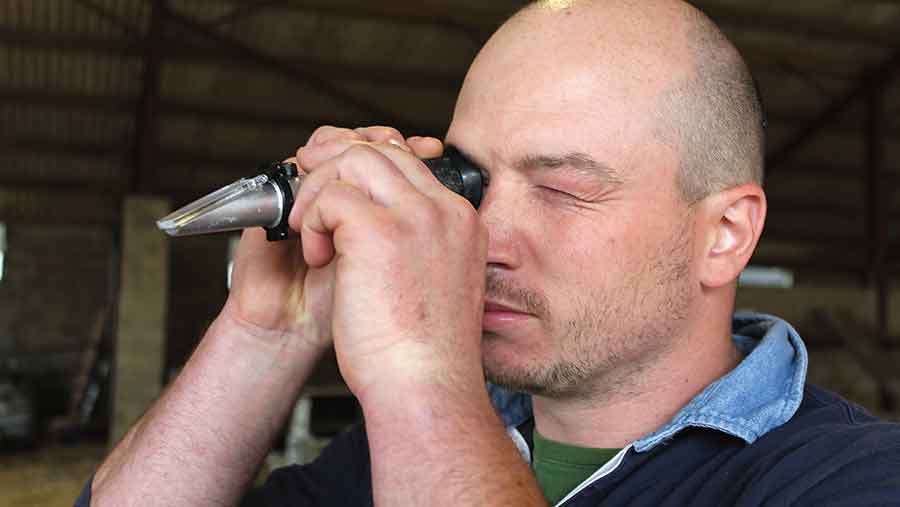 “Before, we would never have got any colostrum reading above 17% on the refractometer, now we always get 21% or above,” comments Mr Baggs.

The aim is to never freeze any colostrum below 15% and use colostrum with a reading of 18% or above for the first colostrum feed as Ig transfer across the gut is highest soon after calving.

Stores of below 18% will be saved for the second feed. Mr Baggs has also been trained by Miss Mahendran to take bloods from calves to asses total blood proteins using a different refractometer. This is used to monitor colostrum management success.

Individual calf results, along with parameters such as age, weight and treatments, will be recorded on the farm’s management software which is accessible via a tablet computer carried by Mr Baggs at all times.

He believes this is a crucial tool in enabling him to monitor calf performance and will eventually help him track individual animals into the milking herd.

Milk feeding rates have also been increased with calves now receiving 900g of calf milk replacer (CMR) a day, split across two feed, compared with 600g/day in the past. CMR protein levels have also recently been upped to 26% from 23% to boost growth rates.

Calves now receive up to three litres, twice a day at 150g CMR/litre up to to eight weeks old. They are then stepped down until weaning at 10 weeks.

In recent months, building ventilation has been improved by removing an internal wall and knocking out two top rows of bricks on the building walls. Having originally housed calves of mixed ages in the same air space, animals now move into what used to be a machinery shed, post weaning.

This reduces disease challenge to the younger calves.

Pens are regularly cleaned and rested and calf coats are used on newborn animals during the winter so energy is partitioned into growing, rather than keeping warm.

Once body temperature is at 39.7C or above for six hours the tag will flash. Mr Baggs decided to take part in an RVC trial looking at the tags after reading an article in Farmers Weekly asking for farmers to get involved.

As part of a pilot study, tags were put in calves from 7-10 days old up until weaning. On 58 calves (half of which got tags), 83% had flashing tags, which indicated early signs of pneumonia.

Calves with flashing tags received a three-day course of NSAIDs, then if the tag was still flashing they received antibiotics, explains Miss Mahendran, who carried out the trial. 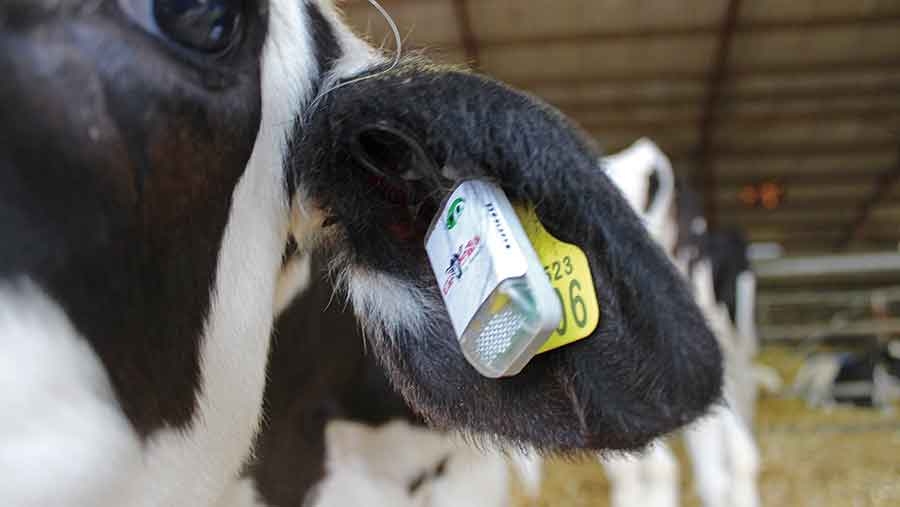 “78% of calves required antibiotics, so there’s the potential to save treating 22% of calves,” she says. A full study is now being carried out in conjunction with Damory Vets to further explore the need for antibiotics as first line treatment for early signs of pneumonia using the tags.

Mr Baggs says the practical benefits of the tags are significant, reducing labour and making it simple for all staff, regardless of experience, to identify sick animals. The farm hasn’t lost a single calf to pneumonia since using the tags.

“The advantages of initiating treatment early are huge – you’re not getting the lung damage, calves off their feed or the growth checks. The tags are a really helpful monitoring tool and regardless of the trial, we will keep using them, but we’ll talk with Matt about how to treat calves once the trial is over.”

Mr Baggs says increased milk feeding levels, coupled with general improvements in calf health has meant average growth rates have improved from 0.6kg/day to 0.8kg/day. This should help lower age at first calving from 28 months to 26 months and enable stores to be sold quicker.

“Feeding the higher rate has resulted in healthier calves and less treatments so we are spending money on feed and growth, rather than drugs. We hope that will be reflected in healthier animals in the long run. We are definitely getting stronger animals out of the shed,” he says.