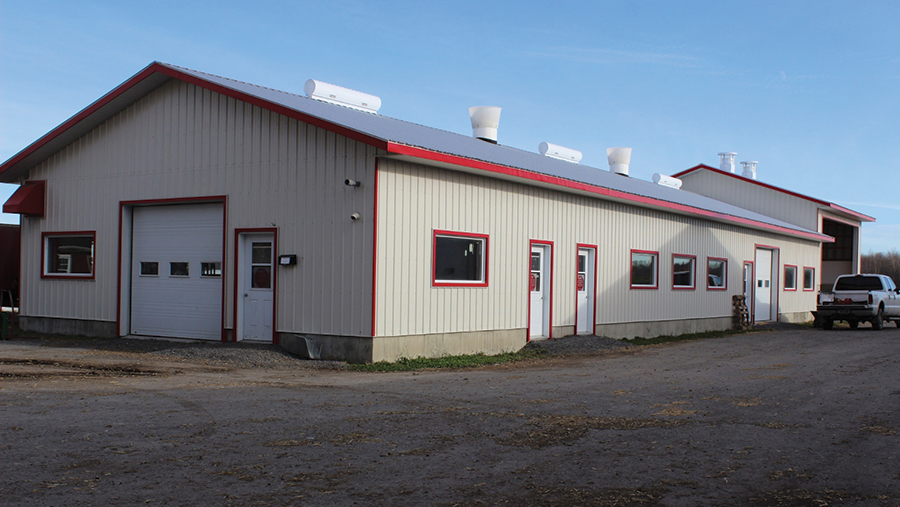 Switching from calf hutches to a bespoke calf rearing unit has slashed antibiotic use and is seeing zero mortality on a Canadian family farm.

Calves are averaging more than 1.2kg daily liveweight gain/day and calve down at 22 months and now give 1,000kg more milk in their first lactation.

This is done without antibiotics, whereas before the shed was built the spring and autumn periods often saw calves get two antibiotic treatments for respiratory issues.

And while the technology within the shed allows the team to give calves optimal care through the year, vet Jodi Wallace, who farms with her husband Mark Anderson and brother in-law Danny near Howick, Quebec, stresses that mindset is important.

“We think of the calves like they are our children,” Dr Wallace told the recent European Calf Conference in Bremen.

“We need to farm like we’re live on YouTube the whole time. Calves are normally born healthy – it’s something we do or don’t do that makes them sick.”

A minor outbreak of scours occurred while the family were on holiday in 2018, resulting in some sick calves and one dead. Colostrum protocols weren’t adhered to as closely as they should have been.

“It showed us how important everyone on the farm is to healthy calves,” said Dr Wallace.

Since then calf health has been back on track. Calf mortality and antibiotic use is back to 0%. 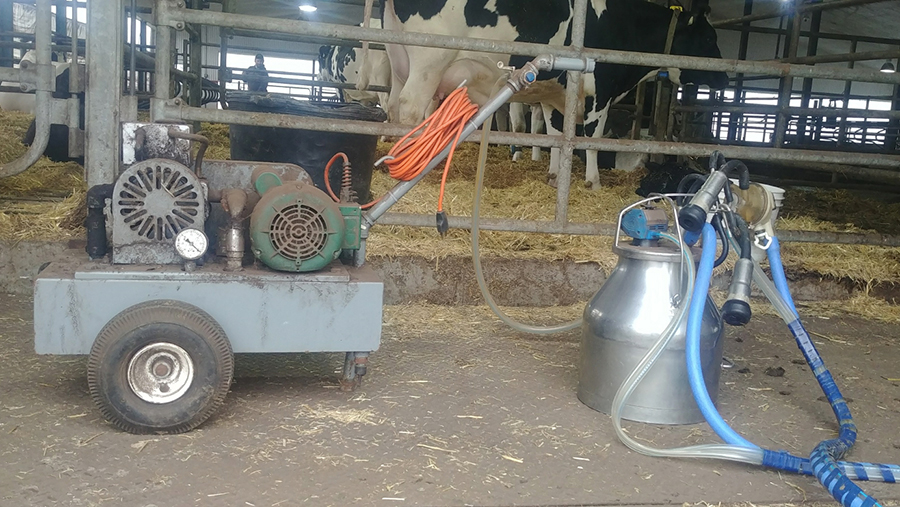 Calving is monitored closely to deliver 10% of the calf’s bodyweight in high-quality colostrum within an hour of being born. A 45kg calf needs at least 4.5 litres of colostrum.

The team strives to bottle feed colostrum within the first hour of life. Speed is important, says Dr Wallace.

The epithelium (intestinal wall) in the calf’s small intestine has large receptors to absorb immunoglobulins (IgGs), but unwanted organisms, such s dangerous strains of E Coli, are similar in size to colostrum antibodies, so it is important to get the IgGs there first.

Every colostrum feed is taken on a portable milking machine and sampled for quality on a Brix refractometer before being fed to the calf. Colostrum must be over 24% – most cows give 26-33% on the Brix scale.

The calf is supplemented with replacement colostrum if it tests below 22%. This means that all calves receive the recommended 200g of IgGs in the first hour of life. The cow’s second milking is also bottled and fed to the calf after the colostrum feed. 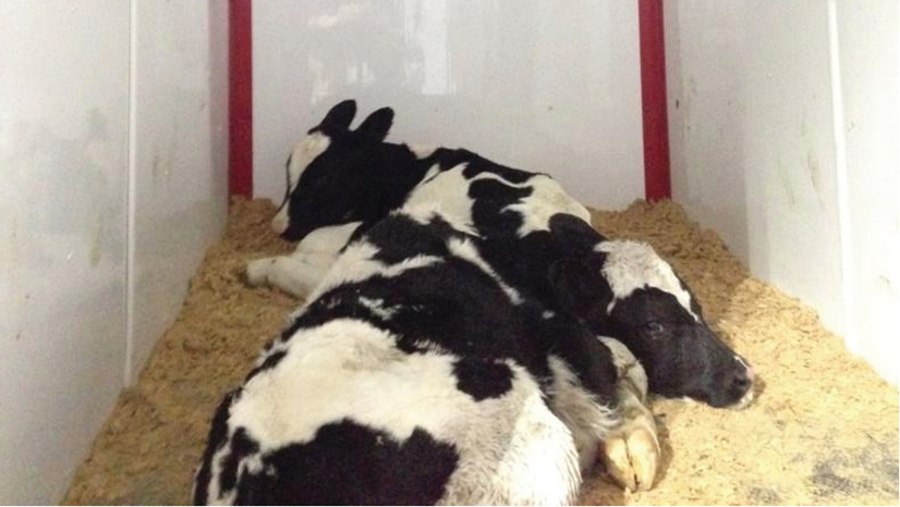 Newborn calves are moved in a calf buggy from the loose straw transition pen to the calf unit. They are placed in an incubator room where they are bottle-fed colostrum, weighed, recorded and their navels are dipped in iodine.

A fact sheet is kept on every calf, including birth date and weight, colostrum quality, intakes and when it was fed. This acts as a vital reference back as the heifer grows and enters the milking herd.

Calves typically spend 1-3 hours in the 26C incubation room. Calves leave when their hair is dry.

Calves transfer to pens and are typically paired from day one of life, with some calves getting grouped in threes, depending on the calving pattern.

This is done for socialisation, which increases feed intakes and is believed to help the animal cope with stress events later in life. Bulls are kept on one side of the shed, heifers on the other.

Acidified (4.2-4.5pH) milk is supplied to calves continuously via automatic feeders. The pH prevents bacterial growth in the milk for three days.

The milk system mixes 200 litres of milk at a time, usually every two to three days. It is agitated every 15 minutes and fed at 22c, which, along with control-flow teats, aids milk digestion, which is important in the ad-lib programme.

Each pair of calves has access to one teat, which is replaced at weaning for the next calves.

Hay is offered from week three and ad-lib grain pellets. The majority of calves are weaned abruptly at 56-60 days, providing they are eating enough hay (2kgDM a head/day) and pellets. 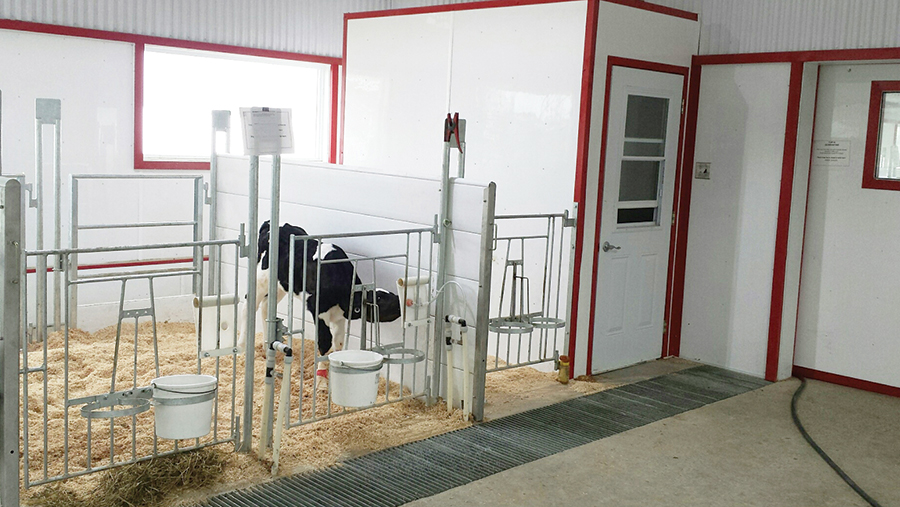 The unit is fitted with air tubes which circulate fresh air from outside the building.

Air is replaced at least four times anhour in winter and 20-40 times an hour in summer. This is done slowly without creating a draught.

Temperature is regulated by insulated building materials and a central alley underfloor heating system. In winter the barn is kept at 1-4C and calves under one week old get coats if the temperature is below 8C.

Calves spend 75% of their time lying down. Fresh wood shavings are added every day.

Manure is removed with a chain cleaner and stored outside. This happens once a week in the winter and up to three times a week in the summer to prevent gas and ammonia build-up.

The floor is sloped and drains into a catchment tank below to keep bedding and calves dry and clean.

Calves leave the calf unit and enter the heifer and dry cow barn at 12 weeks old and remain with calves familiar to them to minimise the stress of the new environment.

Each pen is cleaned and disinfected with chlorine dioxide – one of the few products that kills cryptosporidium parvum, explains Dr Wallace.

A total mixed ration of grains and hay is fed to keep calves growing at 1kg a day to reach 400kg by 10-11 months. They will be inseminated from this point.