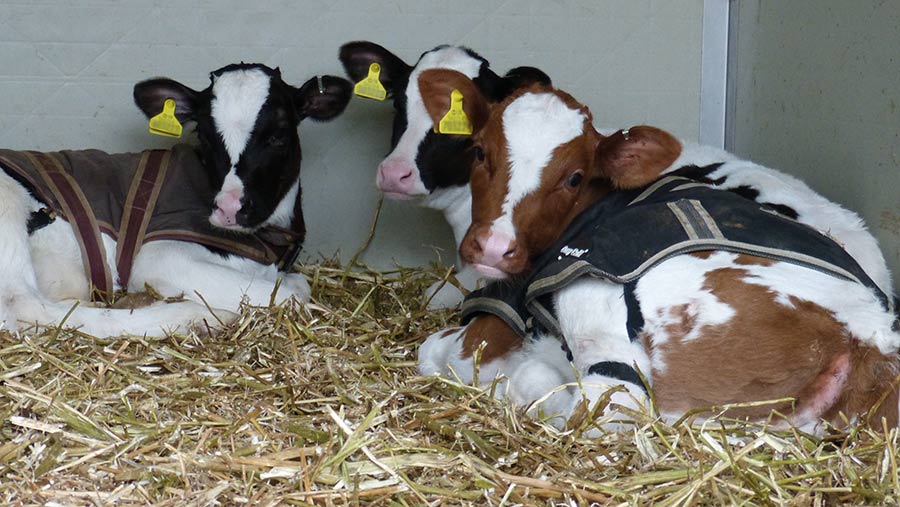 Investing in calf housing and milk powder is paying dividends for a North Devon dairy farm, which has seen mortality and drug use fall and growth rates lift.

The longer-term impacts of healthier, faster-growing calves entering the dairy herd are still to be seen at High Park Farm, Bideford, but the early signs are promising.

This is according to father and son team Andrew and Peter Hockridge, who rear their own replacements for their 250-head Holstein autumn calving herd.

See also: How a bespoke calf barn cut antibiotic use and mortality

The High Park herd calves from June to November, which historically meant a flurry of calves in late November and December when room became tight.

All dairy heifer calves are reared at home and beef-cross calves are sold at six-to-eight weeks old at Holsworthy market.

The increase in calves during those two months has typically resulted in pathogens building up in sheds and a spike in calf mortality around Christmas time when numbers of calves on milk peaked at about 60 head.

In December 2018, a mycoplasma outbreak killed 13 calves, something the Hockridges don’t want to see happen again.

The previous system saw calves penned individually in hurdles for 10-14 days before being grouped for the remaining eight-to-nine weeks of the milk feeding phase.

The grouped stage was spent in a roomy steel-framed cattle building with a clay floor, pitched roof, dung boards around the outside of the shed (1.8m high) and wood boarding above.

Calves are still penned individually in the nursery shed, but most are now moved into a specific calf house with calves of a similar age, in groups of six to seven.

Meanwhile, the new shed frees up more room inside for the other calves, explains Peter.

The north-east facing barns sit 50m away from any other sheds in a sheltered part of the farm. This means the prevailing wind blows across the sheds but rarely into them.

As well as changing the building, the Hockridges also changed their milk powder, opting for a 60% skimmed milk powder, which uses 100% dairy protein, from Three Counties Feeds.

Calves are fed six litres of milk (900g of powder a calf a day) in two feeds from a milk train pulled by a quad bike.

Calves have access to ground rape straw and a 20% protein nut, with whole maize and cooked barley to help rumen development. Calves are usually eating 2.5kg a head a day by seven weeks of age.

Calves are weaned over five days at 12 weeks old, with milk reduced from six litres/day to nothing. They remain in the pen for at least another week until being moved to the grower shed. 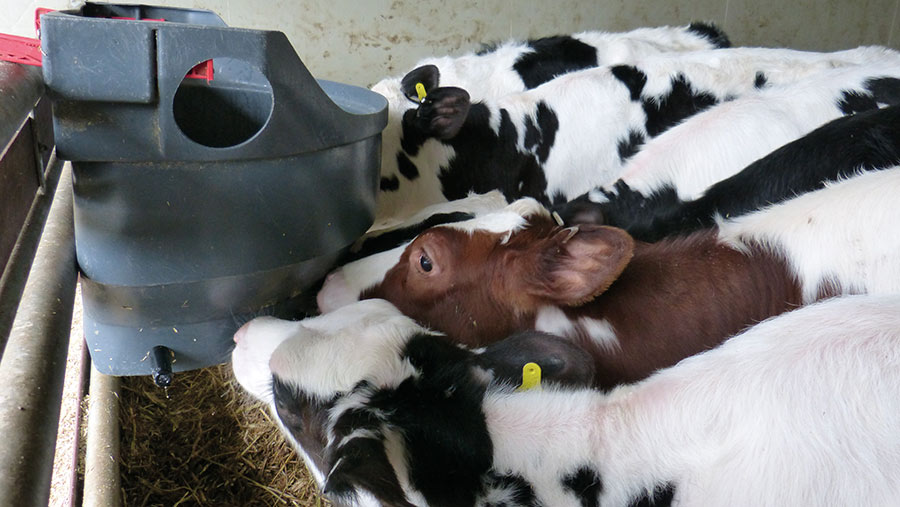 Torch Farm Vets also recently purchased thermometer and humidity monitors, which they installed in both buildings to compare fluctuations.

Despite last winter being very wet and challenging, the study found the average weight gain in the new calf unit was 56% more (see table below).

Despite the milk powder being expensive (£2,000/t), Peter has calculated that each feed is 10p cheaper than feeding whole milk (at a milk price of 31p/litre).

The calf units cost £3,250, but the improvements in mortality more than paid for one unit in a year. At a rough value of £250 for a weaned calf, the 16 extra calves weaned are worth £4,000, explains Peter.

Calves growing faster and having fewer problems could dramatically help the farm’s cost structure in the future.

Currently, the farm calves down at about 26 months, but with heifers growing faster, Andrew and Peter are looking at calving at 25 months, which would save on feeding growing heifers.

Peter adds: “With us switching to sexed semen, we can produce more beef-cross calves.

“We are considering rearing these and selling weaned calves into the Buitelaar supply chain.”

The optimum climate calf barn was developed in Germany and has been used across northern Europe for 10 years.

It is a propylene plastic structure that completely segregates each pen of calves from each other to allow the easy cleaning of individual units in isolation and to contain any disease to one bay.

The suppliers claim that a low-angled roof uses the stack effect from the calves to drive stale air out of the units.