A large US dairy is achieving exceptionally low mortality rates of 1% in its pre-weaned calves, and hitting daily growth rates of 800g up to weaning.

About 1,800 calves will be on milk at any one time at Cow Palace Dairy in Washington State, with nine employees responsible for caring both for them and the remaining youngstock, aged up to four months.

Read the report and watch the video on dehorning below.

Having so many to feed at once makes it a military operation, but at no point does it ever compromise animal welfare, with the dairy running mortality rates within the top 1% of performance within the US.

“It all starts right here,” says Scott Abbott, from Dairy Vet Management, based in Washington, and director of technical services at World Wide Sires.

There is growing pressure in the US, like in the UK, for calves to be grouped together.

But to strike a balance between animal welfare concerns and maintaining high health standards, the farm uses individual hutches in bays of three so calves can have some contact with each other. 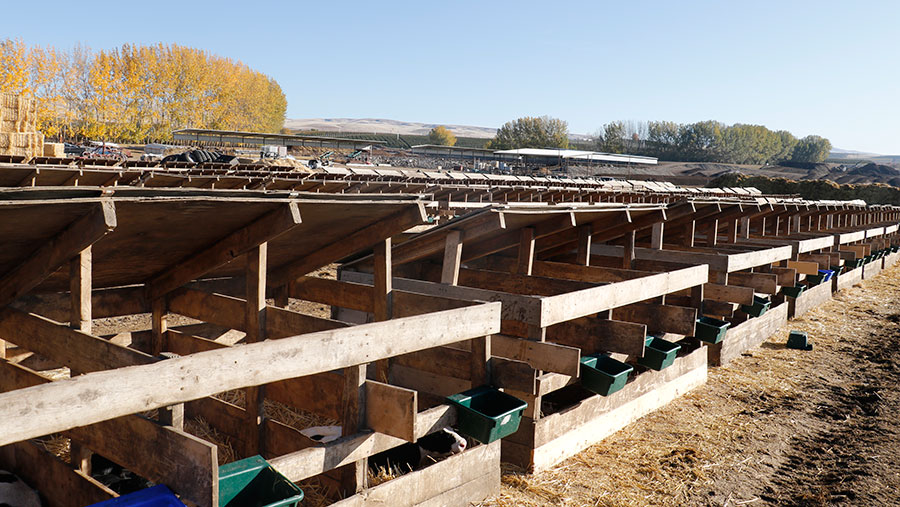 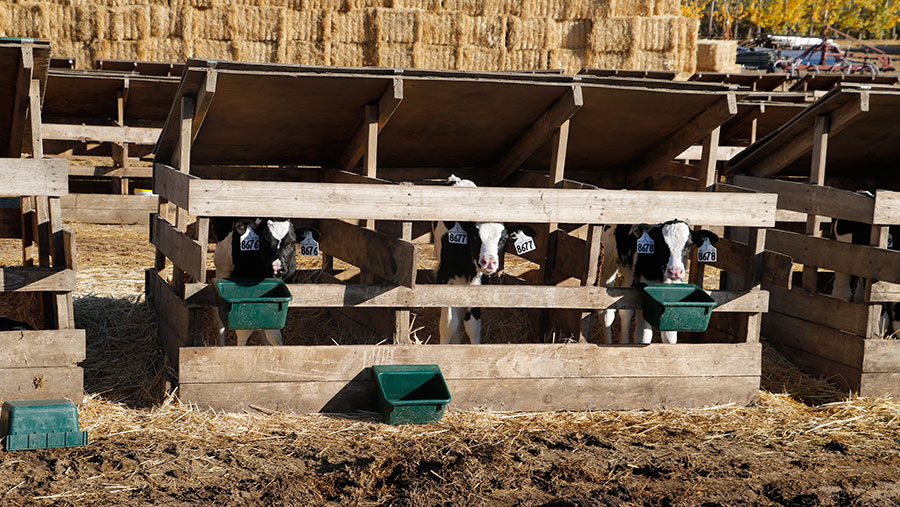 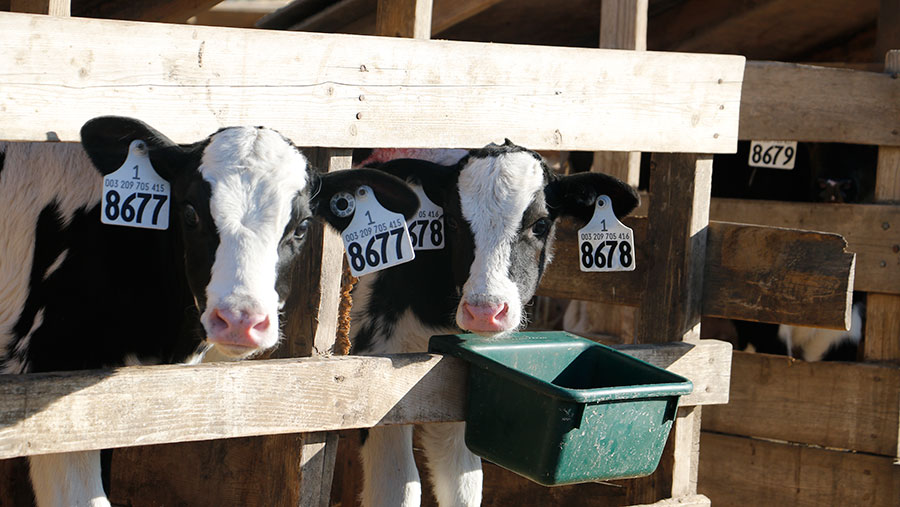 There is no legal size requirements in the US, unlike in the UK, but even so, Cow Palace aims to set its own standards.

“We are going to increase the size of the hutch because of animal welfare concerns and put two calves [per bay] so it’s bigger. There’s a large movement to group calves together from an early age, but I’m a vet and disease spreads by contact.

“Having animals in hutches reduces the disease threat. We want to keep contact with each other to improve socialisation, but we are trying to keep calves healthy,” says Dr Abbott.

Calves normally remain in one hutch until weaning, but in the winter, heavy snow and higher rainfall means they often have to move them to a fresh hutch to keep them clean.

However, hot summer temperatures of up to 40C mean the wooden hutches result in better performance, despite them being harder to clean than plastic ones.

“We clean them with a pressure washer using an alkalising chlorine solution.

“Plastic hutches are better, no question about it, because they are easier to clean, but we actually have higher sickness levels in them because in the summer they get hot and the air movement isn’t great because they have solid sides,” says Dr Abbott.

Calves are bedded with plenty of fresh straw two to three times weekly using a small tractor and trailer ­– one person drives while another beds down using a hatch at the back of the hutch.

“Everyone talks about building calf barns. These hutches are nothing special. The number one thing is keeping calves dry and warm,” adds Dr Abbott, who places a strong emphasis on protocols.

Calves used to be dehorned aged two months with a hot iron, but the farm has switched to dehorning at two to four days old using a paste.

They believe it is much less stressful for the calves and the staff, with the procedure taking a matter of minutes.

Calves are given a painkiller in their milk before being restrained using a portable head lock. Hair is pre-cut and the paste is applied to the skin covering the horn bud.

Watch how calves are dehorned using paste at Cow Palace.

On average, only one in 400 calves require a partial dehorn at a later stage.

Milk is fed using a motorised “milk taxi” and a high-volume nozzle to dispense the liquid. At the front of the taxi is a hopper containing starter pellets that are fed at the same time. 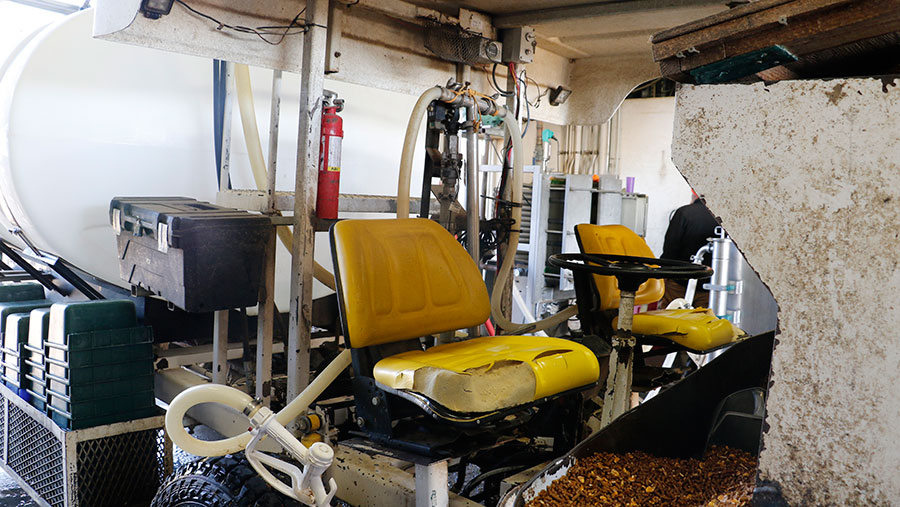 Milk is pasteurised to 63C and each batch is measured using a refractometer to test solids. Milk powder is added to ensure it is consistent and fed each day at 13% milk solids at 40C.

They farm feeds calves high volumes of milk as early as possible; by 15 days calves will be on 10 litres right up until weaning.

Although “a handful” of grain is offered from the start, calves don’t start eating significant amounts until day 20-25.

Starter is expensive, but the business sees it as a good investment to help drive early growth when it’s most efficient.

The farm’s philosophy is: “1kg of extra weight gained pre-weaning is worth 200 litres of milk later in life.”

Starter comprises flaked maize, soya protein and molasses, and although small amounts of chopped alfalfa hay is introduced to the ration after weaning, significant amounts of forage aren’t fed until much later in life, when the rumen is fully developed. 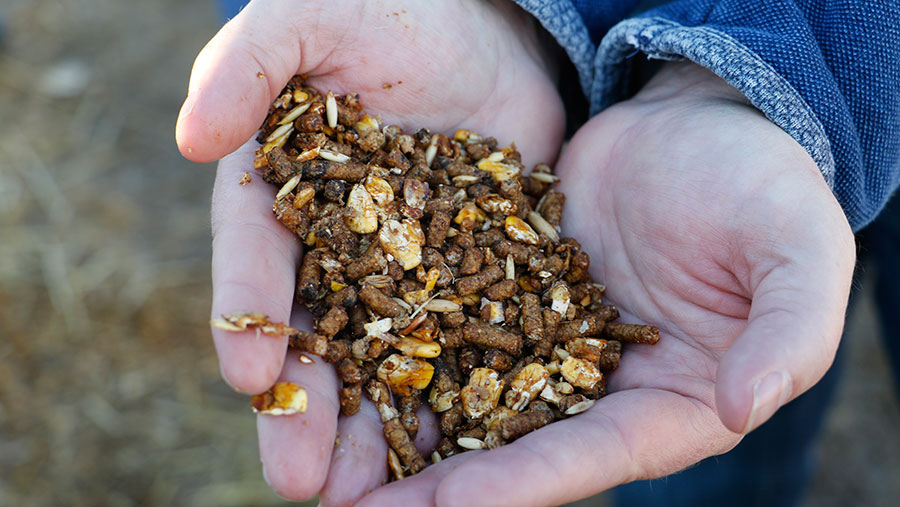 “We want to drive that first 30 days to get calves to grow really well and build their strength. A lot of the time, when we put calves on milk powder, they are on low energy and we expect them to do better, which is why we like to keep them on milk.”

Therefore, forage is slowly built up in calf rations from 65 days, with alfalfa hay being offered rather than straw, because Dr Abbott says the nutritional quality of straw is so low.

About 20% of chopped alfalfa is mixed in with pellets post weaning. 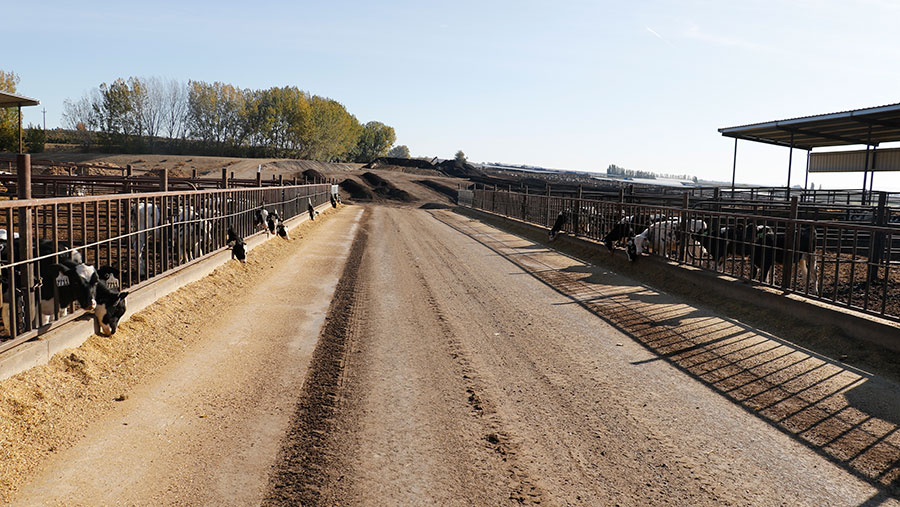 “You don’t see ‘hay bellies’ on these calves. We want to see a little bit of the back bone. Calves that have a lot of forage have a lot sharper back bone and the ribs are sticking out.

Dr Abbott says “hay bellies” are caused by forage expanding the intestine, not the rumen, because it is not fully developed.

About the Global Training Centre

The Global Training Centre is owned by breeding company World Wide Sires and offers management and reproductive training to people working within the dairy industry.

Training is delivered by the WWS team of vets and advisers and is a balance of classroom presentations and practical training on working dairy farms in Washington state.

For additional information on the availability and cost of courses, contact Michael Halliwell at mhalliwell@wwsires.co.uk or 07710 474 145.

At four months, calves are moved to a heifer-rearing facility about 35 miles away. 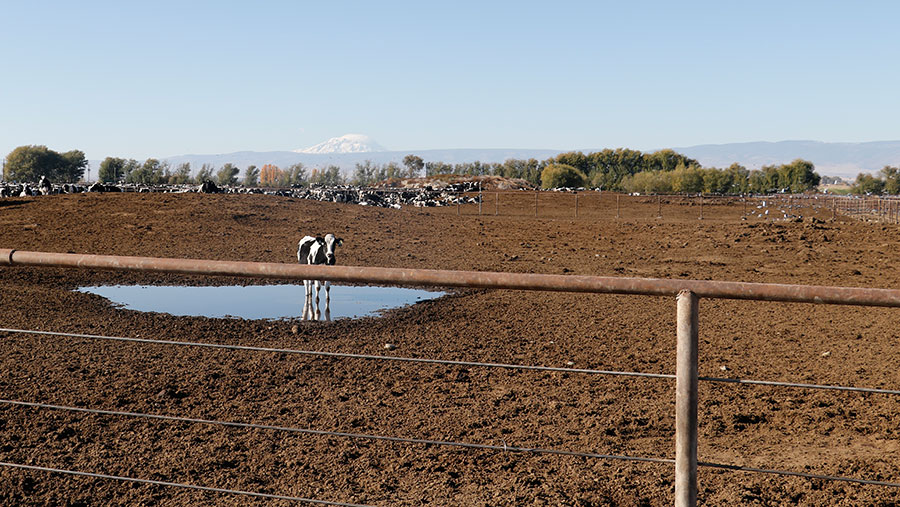 Heifers are bred at 12-12.5 months. They receive one shot of estrumate and are bred every two weeks. Anything not bred or seen in heat receives prostaglandin.

Embryos are used on the bottom end of heifers and everything else receives three services to sexed semen and then beef.

Any small heifers or non-breeders after 18 months will be sold at auction, although the numbers are low.

“We know if there is one too small in the breeding pens when you put them in the lockups, and we don’t mess around – we just sell her,” says youngstock manager Josh Johnston. 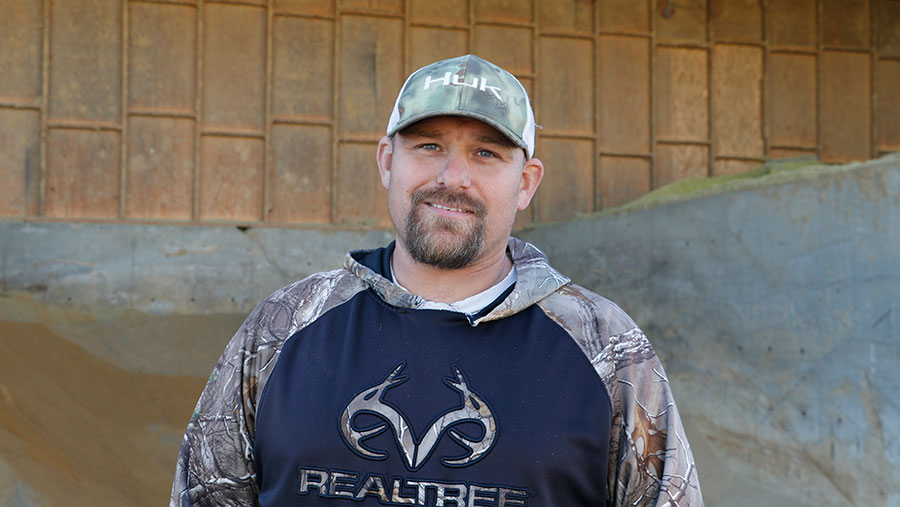 Heifers only have three ration changes the whole time they are at the heifer-rearing site, each introduced gradually. Every pen is numbered, so the feed operator knows requirements and can record allocations. 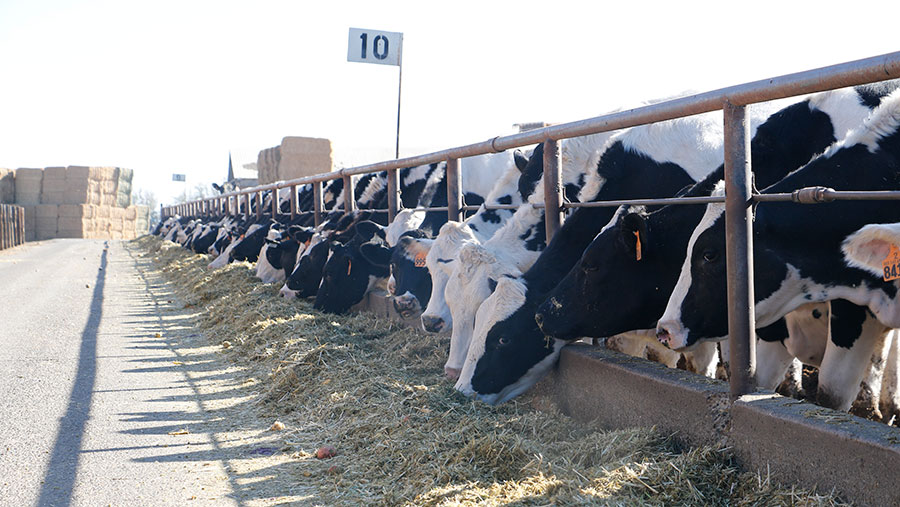 Mr Johnston is able to keep feed costs low at £1.09 a head a day by making the most of waste feed products from nearby farms and factories.

The unit receives thousands of tonnes of free waste apples and potatoes, which are used in rations to feed heifers from eight months. 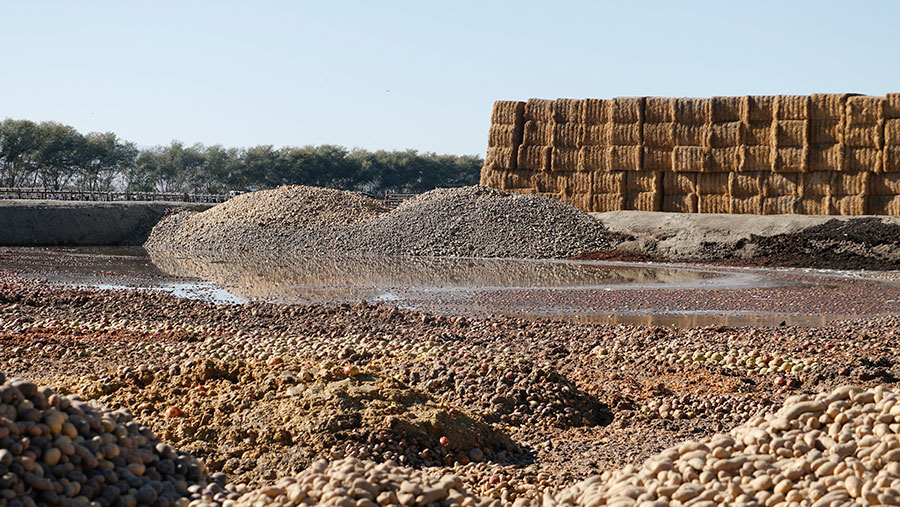 Heifers don’t start receiving significant amounts of forage or pulp until they are weighing about 272kg at eight months.

“Anything before that we end up with issues. Our wet feed is pretty variable and that’s part of the reason we can’t feed it any younger, but the bigger animals can handle the changes.

“The reason the feedlot is here is because of the access to this feed. They want to get rid of it and we are big enough to take it all.

“What’s in this will vary from load to load, that’s why we watch the pens from day to day. But on the plus side, it’s free,” adds Mr Johnston.

Sometimes older animals can be prone to getting a bit fat on the pulp ration, so they are limit fed and watched closely.

Mr Johnston says good early growth is the cornerstone to their success, with growth weights averaging 900g from entry to exit and less than 5% open at 18 months.

“What makes it successful is for the first six months, the calves are taken care of. Honestly, our biggest issue is it’s too easy to get them to grow.”

Protocols for management of baby calves