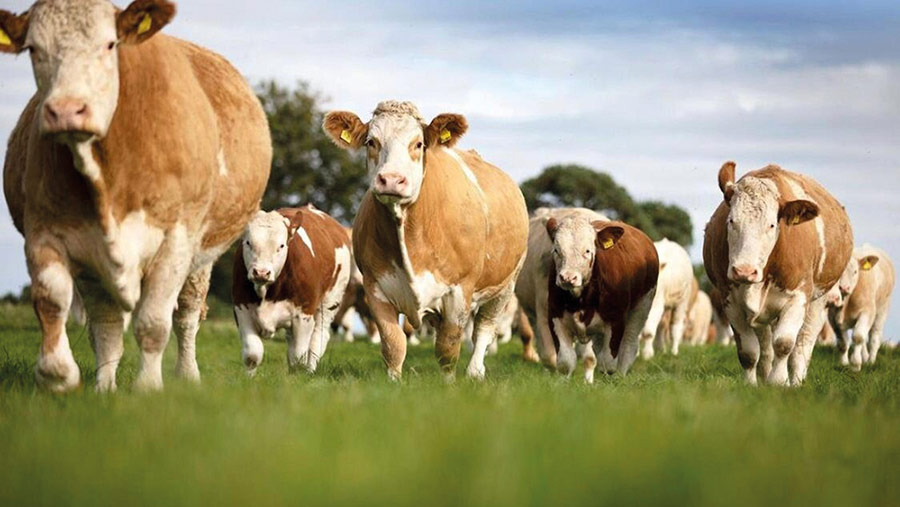 The Islavale herd of Berryleys Farm, near Grange, Keith, is run as a partnership by Stewart Stronach, partner Fiona, his parents, Stewart and Hazel, and his son, Michael.

Like many Simmental herds, the Islavale herd experiences a high twinning rate most years.

The Stronachs participated in the Livestock Health Scotland and Scottish Agricultural College Live Calf Project, which looked at calf output in 2018 and 2019 on mainly commercial herds.

The overall average of the study was a twinning rate of 4%.

Below, Mr Stronach details some key factors that help the farm manage twins each year.

See also: Why Angus are earning an integrated finisher more than Blues

Cattle are scanned for calves within six weeks of the bulling period ending, which is in September for the spring calvers.

This identifies the vast majority of twins and enables a close eye to be kept on them, with preferential grazing and earlier housing if required, explains Mr Stronach.

Twins are typically housed together with older cows, thinner cows and some in-calf heifers.

This usually results in a group of 28-30 cows for each calving block, which are housed and fed separately all winter.

This group is housed at Mid Paithnick, the adjacent farm that the Stronachs own up the road from Berryleys.

All cows return home to Maisley a month prior to calving.

The twin group, including the thin cows and heifers, remains together at turnout, runs with one bull for natural service (as opposed to a cycle of AI) and remains as a group until weaning.

This allows priority grazing, extra barley and mineral supplementation to be provided to the group, as required.

Cows are rationed by Norvite and the farm’s feeding programme is supported by feed adviser Iain MacDonald.

Wholecrop and grass silage is analysed, and minerals, energy and protein are balanced accordingly.

The Stronachs supply cows with about 100MJ of energy/day in late gestation and twin-bearing cows are given 15-20MJ/day more on a flat rate.

The extra energy the twin group needs is supplied by feeding more TMR on an ad-lib basis.

The group is fed in the morning and feed is pushed up in the bunker in the afternoon and evening.

The twins also get about 0.5kg-1kg a head a day extra barley and blend (beet pulp, distillers and cold-pressed rapeseed).

This system allows the cows to choose when to feed.

In contrast, the other groups are rationed and given a daily ration and straw at morning feeding time. 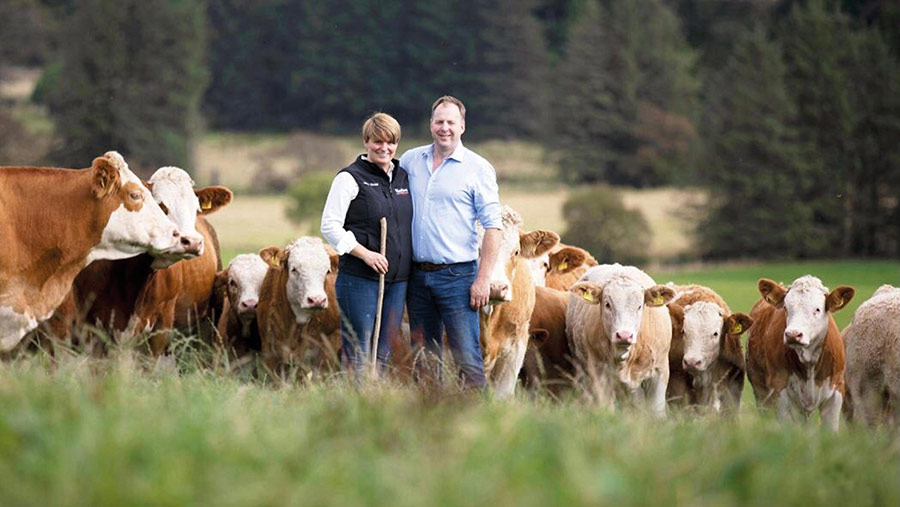 This helps twin-bearing cows and thin cows calve at a condition score of three, so they can calve unassisted. Cows can choose to eat as they need.

Feeding ad-lib at a wide feed bunk means 70% of cows can access feed at any one time, but only four might come and eat when the feed is delivered each morning, minimising bullying and maximising intakes.

Winter mineral supplementation starts with a standard Norvite powdered mineral for beef cows, which the Stronachs feed at about 130-150g a head a day in the TMR.

The herd then gets a bespoke mineral made up to the farm’s forage requirements containing a luxury level of vitamin E (4,000 international units a kilogramme) and magnesium at 20% inclusion from six weeks pre-calving.

After calving, the cows either go back on to a standard beef mineral or are turned outside with mineral buckets to address any deficiencies at pasture and reduce the risk of staggers.

The twin group also gets a bulling mineral mixed into a bruised barley and blend (16% crude protein), fed in hoppers. This increases the plane of nutrition and aid conception rates.

The calves are allowed to pick at this as a creep feed.

The twin group is housed at one end of a shed directly underneath one of four cameras (two fixed, two remote controlled).

Because the herd’s genetics are so valuable, Mr Stronach will calve the majority of cows with an easy pull. With twins, the farm has found the first one is often coming backwards.

Caesareans are very few and far between on the farm, with one or two needed every five years on average.

“I check the calving cameras every two-to-three hours during calving time,” he says.

“Some cows can calve twins and suckle them on their own, but we do watch them closely. “If nothing comes within half an hour of the onset of calving, we check to see if they are front feet or not.

“As soon as we see back feet, we start to assist them. Once the first one is out, we then pull out the second.”

Most cows cope with twins. Sometimes a calf is fostered on to a cow if a calf is lost and, occasionally, the freemartin is sold to give the other twin, a purebred bull calf, the best chance. Twins can go on to sell as high EBV bulls at Stirling.

The calving shed has individual pens with self-locking yokes to aid management and help the new calves suckle. Cows are only penned to calve if necessary.

Twins are penned up with the cow for four days or so, until the dam has bonded with both calves, and most single outfits go out after 24 hours, weather permitting.

The herd selects from easy-calving and milky lines. This means that some cows will calve twins unassisted and then suckle them on their own.

This is important, because with so many twins in the herd, there aren’t always cows to foster on to, so they stay with the dam until weaning. However, Mr Stronach says they have never bred for a high twinning rate.

“We tend to get more twins in the spring block group, which might be because they are bulling in summer at grass and it is a more natural system.”

More than 50 of the cows have been classed as excellent and 95% of the pure cows are very good or better.