A cow has given birth to twins that are completely unrelated on a Gloucestershire dairy farm.

Richard Gallop, from Oldhurst Farm, in Slimbridge, and his herdsman Martin Williams, were very surprised to find that a Holstein cow from the farm’s 240-cow herd was expecting not one, but two calves when she calved last Thursday. 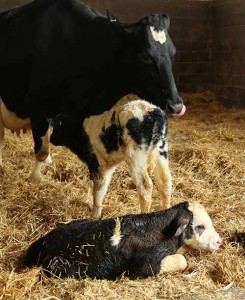 They were even more surprised when they found out one was a Belgian Blue cross and the other was a Simmental cross.

See also: How to use cow stoppers to improve dairy cow fertility

The cow had been artificially inseminated with Simmental semen – making her the mother of one – but it was her ninth service, so to help her conceive, embryo transfer technician Amy Fawcett from Tyndale Vets, Gloucestershire, implanted a cow’s stopper into her seven days after service.

A cow stopper is a term to describe an embryo implanted into a cow that has failed to conceive naturally. It is inserted into the cow’s uterus, using the standard technique for embryo transfer.

The embryo was produced by a donor dam and sire, which meant that neither calves were genetically related, even though they were born from the same mother.

“The practice itself is quite unusual and it is very unusual for both embryos to survive.”

Mr Preece said he only knew of it happening once before a number of years ago.

Both heifer calves were born healthy and are doing well.