Showgoers were delighted when a Dairy Shorthorn was tapped out as the dairy interbreed champion for the first time in living memory.

This triumph follows last year’s disappointment when Dairy Shorthorn classes were cancelled due to breeders being under TB-lockdown.

Ballytrain Bloom 30th, from a home-bred family, is by Brieryside Golden Sand and out of Ballytrain Laura 5th.

Taking the rosette south of the border was breeder James Lambe, Castleblaney, County Monaghan, who knew he had something special after winning at Tullamore show last year. 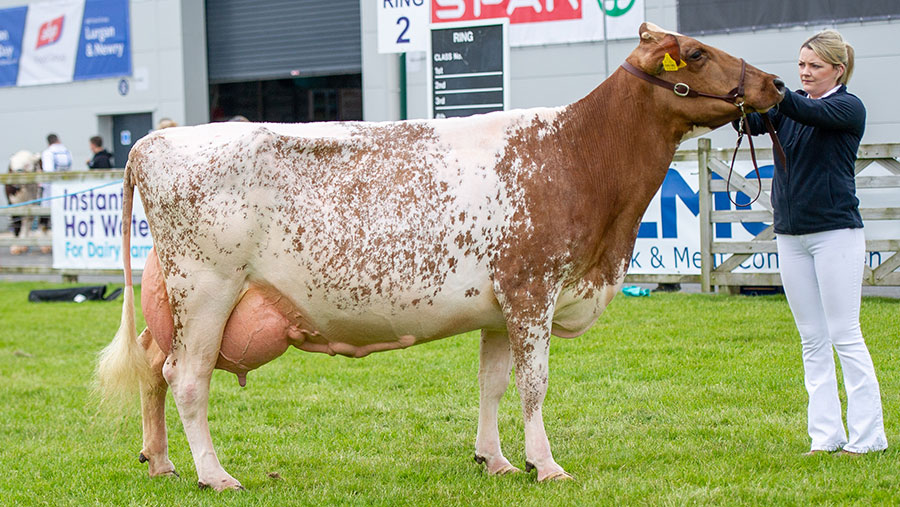 See also: How to minimise acidosis risk at turnout

“I’ve never shown at Balmoral before because I didn’t think I ever had anything quite good enough but I knew she was,” said Mr Lambe. “She’s the best cow I’ve ever owned.”

The Fleming family, Downpatrick, County Down, continued a run of Balmoral success with Cornish-bred third calver Quintrell Kyros Indigo, who goes back to the Comerica family. 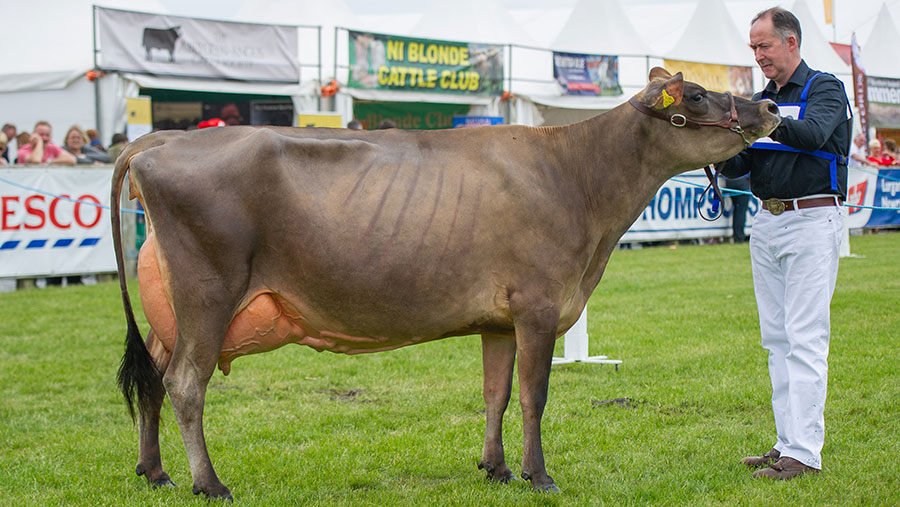 She was bred by Mike, Claire and Jenny Colwell in their spring-calving Jersey herd at Glyn Crest Farm, Redruth. The Flemings bought her when visiting Cornwall when she caught their when out grazing in a field.

She is by Sunset Canyon Kyros and out of Quintrell Comerica Cerulean and from 11 generations of VG and EX cows.

History was also made in the sheep ring when a Zwartbles ewe claimed the interbreed championship for Cyril and Denise Cromie, Ballynahinch, County Down.

The Fort Eloise is out of a home-bred ewe and by Brooklands Boris, a powerful ram bought at Stirling three years ago where he has been used across the 50-55 breeding females the Cromies keep, alongside 100 mules. 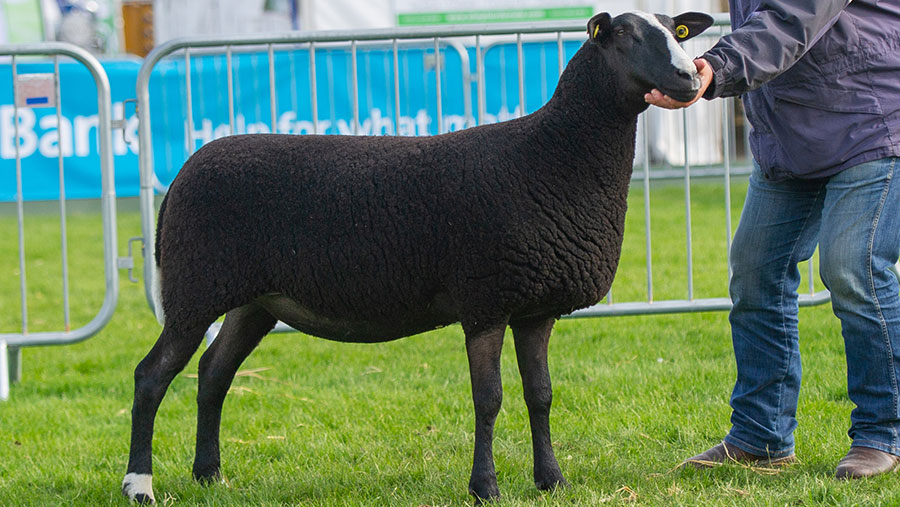 Champion: A Zwartbles ewe by Cyril and Denise Cromie, Ballynahinch

The “gorgeous” show stopper was one of the best Zwartbles judge Carol Watson had ever seen and will no doubt impress at Castlewellan Show this summer.

In reserve was the overall Longwool and Border Leicester champion from the Rosanga flock of the Dickie family, shown by Harold Dickie.

The three-shear ewe was out of a home-bred ewe and sired by a Ditton tup. She won reserve champion at Balmoral last year and has had successes at Ballymoney, Omagh and Antrim. 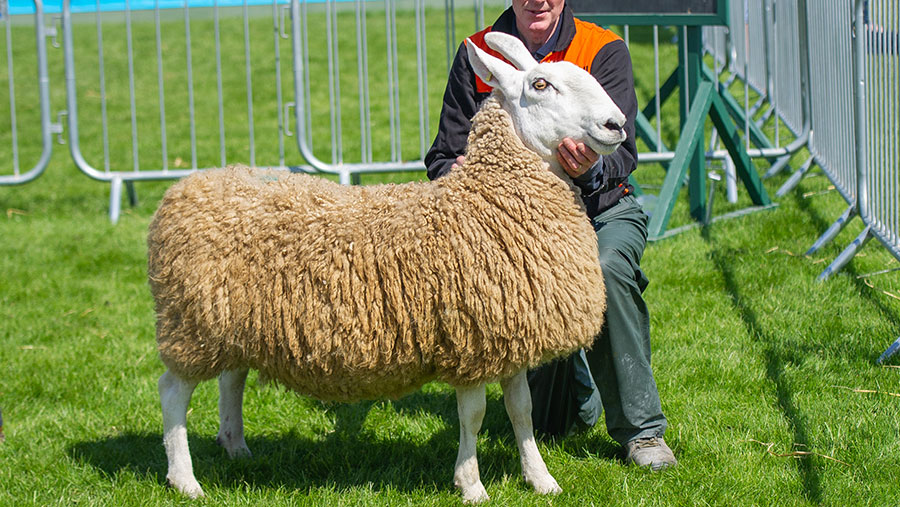 It was Trueman genetics to the fore in the beef ring as both beef interbreed champion and reserve winners had Trueman sires.

Winning the overall championship for the second-time running was a maiden heifer and daughter of the 140,000gns Trueman Jagger, Truman Noreen, from Henry Savage and the team, Newry, County Down. 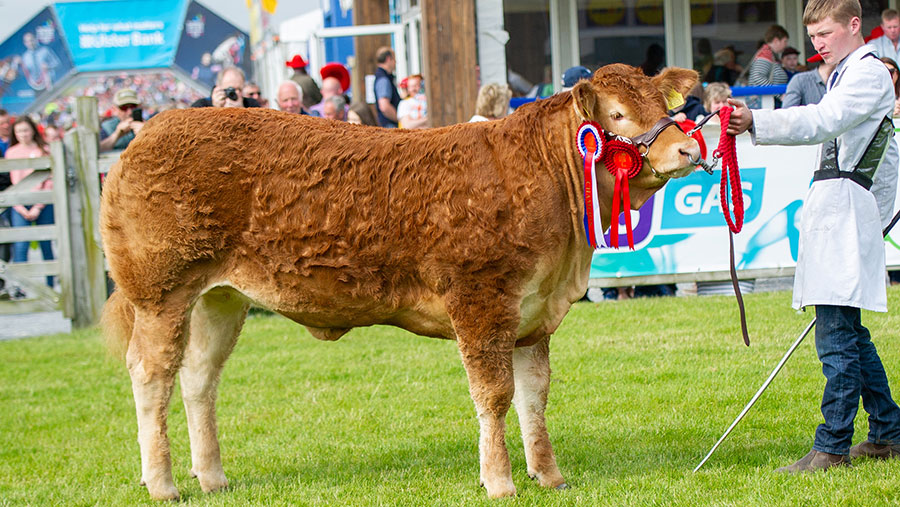 Our of the spectacular cow Euphonium, Noreen is entered into the Royal Highland Show but will likely have her show career put on hold and will put her to the 20,000gns Telfers Munster in February.

Scottish judge Elizabeth Vance tapped out the 13-month-old heifer ahead of the commercial champion from Dermot and Gareth Small and the Strathearn commercials team, Kilkeel, County Down, where the Smalls are developing a pedigree herd – Strathearn Red Limousins. 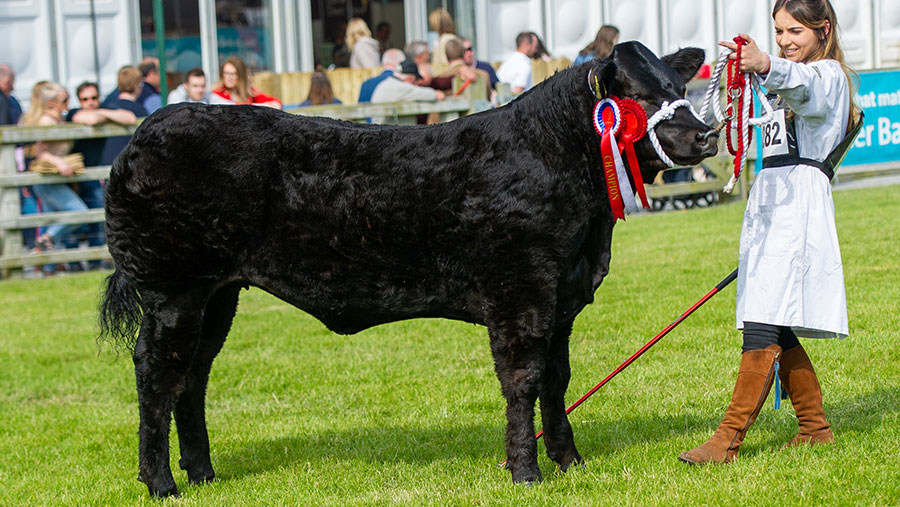 Brilliantly shown by Stephanie Dick, Ronick, Limousins, Flo-Jo is a Trueman Idol daughter and out of a show cow that produced a full brother that also claimed steer champion the day before.

A Cappagh-bred Large White made waves once again by claiming the pig interbreed crown.

But this time the championship went to four-year-old Alfie Moses, Crumlin, County Antrim, and the rest of the Moses family, who bought the red ticket winner from the Todds. 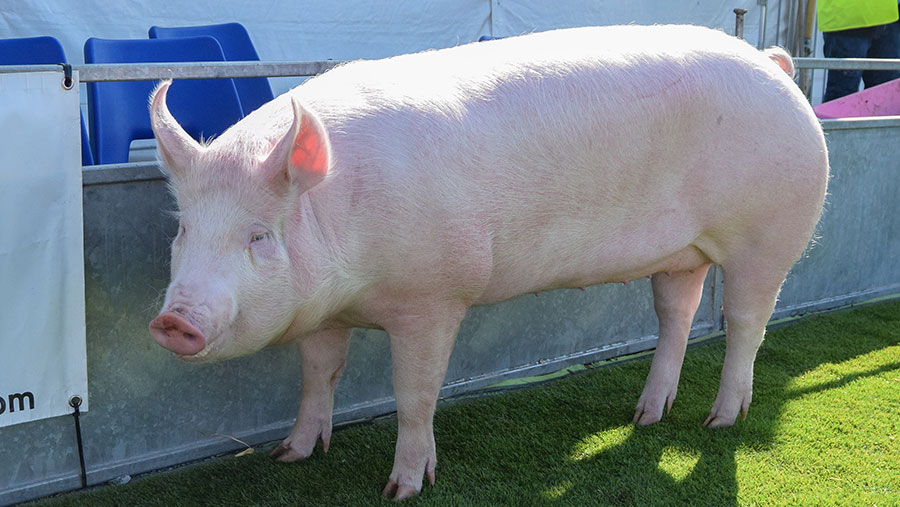 The prize winner was shown as a maiden gilt and will be put in pig when it returns home to the family’s smallholding, where they also breed Texel sheep. 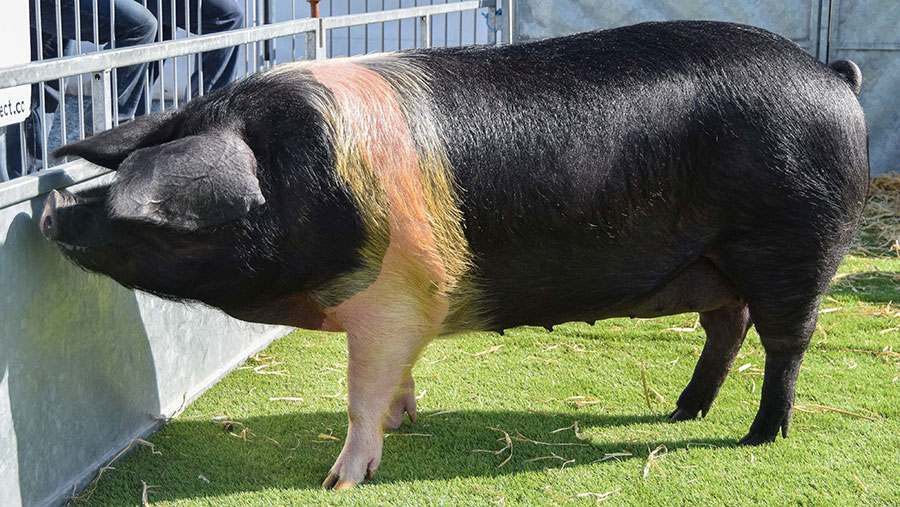 Making a return to Balmoral after a two-year absence and snatching the reserve title was Diane Ruddock of the Monree herd, Donaghcloney, with Monree Spot 3, a gilt due to farrow in August.

Born in April 2017, she was described as having a “perfect saddle with good length” and won her class as a junior gilt last year.