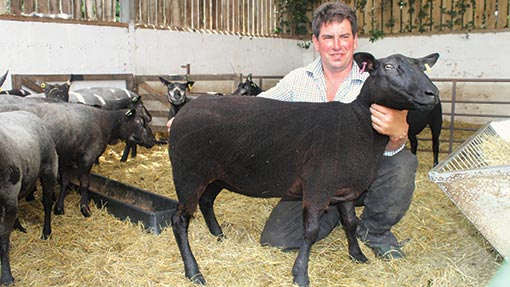 Zwartbles are a popular breed among smallholders and show exhibitors – but now they are being promoted as an alternative to the Mule.

Tall, skinny and black – at first sight Zwartbles sheep are hardly a commercial farmers’ dream. But their proflicacy, milkiness and mothering ability mean they could offer a real alternative to the ever-popular Mule.

And one group of farmers in the South West is leading the way by crossing Zwartbles ewes with Blue Texels and then using a Beltex as a terminal sire.

“We’ve both got a farming background and I wanted to do a bit of showing,” says Mr Mugridge. Having established a nucleus flock from sales at Worcester and Carlisle, the couple began showing in 2011.

Over the past two years they have claimed breed championships at the Royal Cornwall and Three Counties Shows, reserve Continental interbreed group at the Royal Bath & West Show.

However, Mr Mugridge soon noticed a problem. “There are 1,000 members of the Zwartbles Sheep Association, most of whom are smallholders. It’s important to only breed from the best stock – but what do you do with the rest?”

Having already established a small flock of pedigree Blue Texels, Mr Mugridge decided to use a Blue Texel sire on mis-marked Zwartbles ewes, and has been delighted with the results.

“The ram lambs fatten and finish really well, and we’ve been selling the cross-bred ewe lambs as replacements. You have the milkiness and hardiness of the Zwartbles, combined with the carcass and grades of a Texel.”

Mr Mugridge lambs a small group of pedigree Zwartbles in December, to produce decent showing animals, with the Blue Texels lambing in January and the rest in February/March. “We lamb them outside, as it’s cleaner – and then bring them in as the weather can get bad up here on Exmoor.”

Although the Zwartbles are a hardy and long-lived breed, they do need to be fed well, so Mr Mugridge provides them with ad-lib hay all year round, as well as an 18% protein loose sheep mix with stabilising yeast.

Cross-bred and Blue Texel lambs finish at 15-16 weeks, and are either sold privately or at Exeter market.

In an effort to create more marketing opportunities for mis-marked Zwartbles ewes, Mr Mugridge established a South West Zwartbles group, and has had excellent feedback on cross-breeding successes.

One of the group members – Steven Hyde, who farms at Calverleigh – has had considerable success using a Beltex sire on Mr Mugridge’s cross-bred ewes.

“The first crop were born at the end of March and sold at Exeter in early July,” says Mr Mugridge. “He won the champion and reserve champion pen of Beltex-sired lambs, and the 34.5kg lambs, which graded E/U, went on to top the market at £78 each.

“That’s what it’s all about – producing butchers’ lambs in minimal time,” he adds.

“With the Zwartbles influence you have a better ratio of meat to bone, so it becomes a really good commercial lamb. If you were to lamb in February you’d finish them by June to catch the premium market. You wouldn’t be able to do that with a Suffolk cross Mule.”