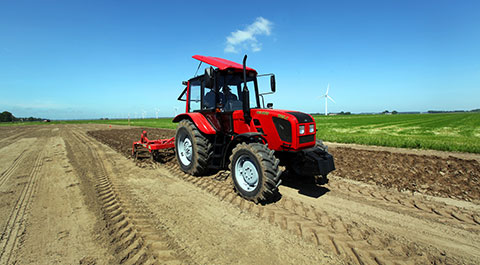 It might not have scored highly but the Belarus had a solid engine and a price-tag that’ll catch the eye of plenty of buyers. Noise and vibrations in the cab were its biggest downfall and the gearbox is pretty complicated, too. Base price: £25,000.

Although it’s a popular choice in the eastern European tractor market, 100hp-plus Belarus tractors are an endangered species in the UK.

The cabin is wonderfully old-school and laden with levers. They’re all to the driver’s right side, including the handbrake, and the hand throttle is almost lost in the jungle of stalks.

Park yourself in the driver’s Grammer seat and the first thing you’ll notice is the off-centre steering wheel. The console runs in-line with the hood but the wheel sits 150mm to the right.

The big dashboard does away with mod-cons. Analogue dials display the key info, although there’s a small digital screen showing forward speed and fuel consumption.

Other plus points include the good lighting system, rear and sidewards visibility and big wing mirrors for the road.

A throaty four-cylinder resides under the Belarus bonnet. It pumps out 101hp with its Minsk-made motor whizzing round at 2,190rpm. Max engine torque is 383Nm and comes at 1,526rpm, so it finds itself a little short in those departments. Fuel consumption is a touch below average both at the Belarusian’s maximum and rated power.

It’s tough to stall, but really can be raucous when you wind up the engine and at 88.2dBa it was the loudest tractor. The turbo whines once you creep over 800rpm and vibrations are likely to make your teeth chatter if you get close to 30kph on the road.

The steering wheel takes some wrestling, too, and because the tractor jumps about on the road steering is difficult at high speeds. Nonetheless, its narrow frame helped it beat the John Deere when it came to turning circle.

Four ranges and four gears add up to 16 forward speeds and eight in reverse.

Sounds simple, but the Belarusian’s gearbox is borderline mind-boggling. A sticker slapped on the side window does little to help decipher the different combinations and target speeds.

The driver must select I or II from the first range. Once selected, the same lever is then moved left to select a second group of ranges, but there’s nothing on the dash to remind the driver which of the first set of ranges was selected. Once the two ranges have been selected the driver can pick a gear.

The four gears are on an H grid with first and fourth gear at the bottom, and second/third at the top. Reverse gears can also be found on the gearstick – there’s no shuttle.

Top road speed is a bone-shuddering 36kph and there are nine gears in the working range from 4-14kph. There aren’t quite the overlaps offered by some of the tractors, but there should be enough options for steady fieldwork.

The Cat 2 linkage and external rams can only be operated from the cab. Rear lift is just over the 5t-mark and the Belarus has the best system for adjusting both link arm lengths.

Cab linkage controls are through the type of sliding levers you’d expect to see on the floor of any early-generation tractor. One deals with raise/lower and the second adjusts draft, but both take arm power to shift.

The hydraulic pump will push 60-litres/min, putting it level with the Same and McCormick at the bottom of the pile.

Vintage controls continue with the pto. Switching between the two speeds (540 and 1,000) is done by spinning a spanner under the cab – prise open a cover on the gearbox to get to a gear selection lever.

Top marks go to the electrical control of both four-wheel drive and diff-lock. There are three positions for each button – permanent/on/off and an led lights up when engaged.

Lifting the one-piece hood reveals a mesh-protected engine fan and two batteries in front of the radiator. Air, oil and diesel filters are easy to get at and there are few grease nipples.