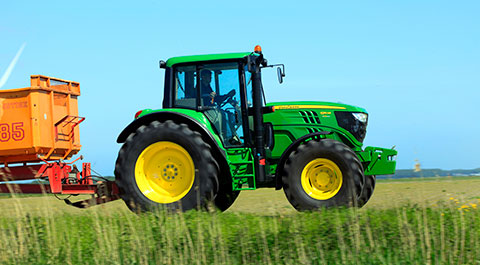 Deere’s build quality and logical arrangement of controls has been the force behind its perennial success. It also had a strong engine, but being the smallest tractor in the range means it carries a visibility-restricting bonnet. Base price: £59,924.

Deere’s 6M is a combination of the 6R’s shape and the older 6030’s cab. Inside the small six-poster things are well tacked together and nicely finished, and there can be few people in farming that aren’t familiar with the basic John Deere controls.

The layout is standard JD fare (minus the Command Centre console) and, bar the linkage controls, everything is mechanical.

From the seat the long, high nose of the M-series contributes to the worst forward visibility of the tractors tested and it’s not much better looking at the link arms.

But at 70.5dBa the tractor is whisper quiet and the suspended front axle made it super smooth on the road. Steering is precise and just three-and-a-half turns take it lock-to-lock, but its 12.5m turning circle was the clumsiest of the test troop.

Tucked under the Deere’s long snout is a four-cylinder PowerTech engine. It performed almost on a par with the Valtra’s Agco Power by recording a maximum of 106hp at the shaft. The engine’s max torque tallied a top-scoring 479Nm at a pretty economical 1,410rpm, too.

Meanwhile, specific fuel consumption was average at maximum engine speed but at 280g/kWh the Deere was less efficient at its rated engine speed.

Controls-wise there’s a simple sliding hand throttle but no memory functions. There’s a rev limiter, too, but it neighbours the air-con controls and the lack of colour coding can cause confusion.

John Deere’s PowrQuad has four powershift steps in each of the six gears, plus a creeper speed.

There’s nothing new here – shunt the stick across the gearing grid from A to F, or into the Park position and three buttons on the top of the stick deal with declutch and powershift steps. A console-mounted rocker can also control clutchpacks and there’s a speedmatching function buried in the dash terminal.

In total there are 10 gears in the working range from 4-14kph and if you take to the road then top speed is 44kph.

Cat 3 hardware hangs off the Deere’s tail, although its linkage lift was a fairly feeble 4,870kg. Stabilisers are a combination of pins, holes and screws and there are linkage controls on the mudguards.

Deere’s in-cab link controls have been the best on the tractor market for over a decade. Thumb-controlled raise/lower buttons and a depth control scroller are both mounted on the black block. Draft adjustment, drop speed and max height are also in the vicinity.

Things aren’t as practical at the back – just two colour-coded and numbered hydraulic outlets are on offer as standard. Hanging out the back window is the best way to adjust flow on top of the hydraulic block, but neither in-cab levers have a float position. The hydraulic pump will boot out an impressive 100-litres/min at 230bar.

Selecting the gear for the three-speed pto is done through a stiff, orange-topped lever. Activating it is via a simple switch and there’s a soft start function to cushion the start-up. There’s a second, external control, but this must be activated in the cab first.

Four-wheel drive is engaged either automatically or permanently through a console-mounted rocker.

Diff-lock is classic Deere – stamp on a button on the cab floor between clutch and brake pedals to engage it.

The long one-piece hood provides good access, but to get to the cab filter you have to clamber up to the top of the engine.

Oil and fuel filters are easier to get at, while the fuse box is tucked behind the seat.